If Cooper Brannan's name sounds familiar, it's because it was in the news quite a bit when the Padres signed him in the spring of 2007. Brannan wasn't a highly regarded prospect but his story was an inspiring one. The young Marine was signed after returning from Iraq, where he lost part of his left hand in an explosion.

The incident happened in September of 2005 when he was stationed on the front lines in Fallujah. He was retrieving a flash-bang grenade from his supply to give it to one of his men who needed one when it went off in his hand. It took off three of his fingers, only two of which could be reattached. Outside of this, I think the only time I've heard of a flash-bang is when my brothers and friends were playing Halo or Call of Duty or something. I'm not saying this to make light of his experience; quite the opposite. It's easy to take things baseball cards and vidja games for granted and forget about the guys who are giving all of themselves to see to it that we can enjoy those things. They don't get to respawn at the bottom of the stairs when a grenade goes off.

The righty ended up pitching in the low minors for the Padres organization in 2007 and '08, and then with an independent team in 2009 before hanging them up to be home with his wife and kids and to pursue his education. That he didn't make it to the majors is beside the point; Brannan is an inspiration to other wounded warriors and others who have faced adversity. Sometimes things don't work out but he just keeps pushing forward.

I didn't know that there were any cards of Cooper Brannan. I hadn't given it any thought until I saw the one pictured above in a lot of Padres rookie cards that I was bidding on anyway because the lot included a 1988 Joey Cora Topps card, and it's my personal goal to own every copy of every Joey Cora card ever made. As soon as I saw the Brannan card I raised my bid just to be sure I got them. It's a 2007 Bowman Heritage Prospects card, which apparently looks different than a regular 2007 Bowman Heritage card. Yeah. Collecting never ceases to be overcomplicated. But that's an extremely first-world problem. 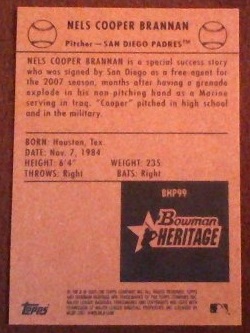