Jon and I attended the Padres Social last night, which meant we bought tickets in a group with about 70 others who use Social Media in some aspect of their lives. The price, I think, doubled from last year's affair but altogether I think it was just as enjoyable if not more so.

It started with a...

I found this part of the night to be a little dull. I just got out of work and was expecting to have some fun and it was like I was plunged back into a meeting. If you've listened to either of these guys in their interviews with Darren Smith you'll know they hold their information close to their chest. If Darren can't get them to spill their secrets then a ragtag group of fans certainly can't.

I like both of these guys, I do, but if they're not going to be forthcoming with the inside information then I don't see the need. From their perspective, fans can't be trusted especially when they all have Twitter and recording devices at the ready. With that said, neither Jon or I bothered to ask any questions. I didn't see the point, since they usually dodge the question anyway.

For instance the first question was about who was going to start Friday's contest. They know who's going to start, but Byrnes rattled off about a dozen pitcher's names who could start, which was about as thrilling as it sounds.

Even when Sandy Alderson did these back in the day, a guy who I never thought to be particularly charismatic, he would share stories of behind the scenes happenings that would make the session worthwhile. Of course he'd usually preface his story with "This story is off the record, so don't even think about sharing it unless you can parry a bayonet thrust", no doubt referring to his skills acquired in infantry training.

The second question was about the departure of Tom Garfinkel, someone who also would have probably at least done his Buddy Black impersonation in the process of answering a question. The two didn't have much to say other than they enjoyed working with him and that life and baseball go on.

At this point I drifted off into a day dream for a spell.

Just caught myself zoning out for about 10 minutes. #PadresSocial

I came to with Byrnes and Hinch answering questions about their favorite ice cream flavor and whether they preferred brown or blue uniforms. Byrnes conducted an impromptu poll in which brown won overwhelmingly and I found out after 20+ years of friendship that Jon likes blue. Go figure.

After the session ended a small crowd swarmed Byrnes trying to slip in some last minute questions about PEDs but were answered with a "no comment".

Last year the night opened with a field visit and a view of batting practice. It couldn't be done this year due to the increased size of the group but I would definitely favor that sort of activity in the future.

To the Jack Deck

I was really pleasantly surprised by the new Jack Daniels branded deck area that was created to fill the void made by the moving of the right field fence. That's where we would spend the rest of our evening. It was a vast improvement over the cramped quarters in last year's Western Metal Supply suite and a better view to boot.

The deck really allowed us to move around and socialize. I have a hard time sitting for 3 hours. On the deck we were moving about from tall stools to comfortable mesh seating to standing areas. It was perfect for this event.

From the moment we stood atop the deck, officials started marching through a long list of Padres celebrities. Jerry Coleman was the first. He was in good spirits and took pictures with all of us.We felt so safe with his arm around us and with his hand resting upon our love handles.

Corey Brock and Andy Masur came through next. Both delightful guys. We didn't get too much time to talk with them but I made sure to mention that I was hoping that the pampering would continue into the night and end with us getting table showers. They exited quickly after that.

A trough of food from Phil's BBQ was served about this time. Some fans continued to socialize and others feasted upon tri-tip and cole slaw.

Speaking of BBQ, Randy Jones came through next. I watched to see if he'd try to overturn the Phil's table but he remained composed and instead signed for his fans.

I concentrated my efforts on getting the results of the Fox Sports San Diego Girl vote before next week's big reveal. The girls were tight lipped and wouldn't give me even the smallest of hints.

Tried to trick the @FSSD_Girls into telling who will be the new girl. They tricked me into thinking I didn't want to know until next week. 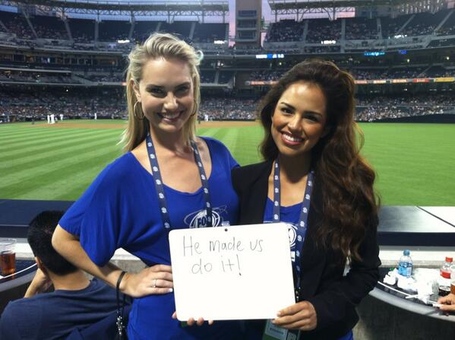 Next in the celebrity parade was the newly signed Hunter Renfroe. I didn't even know he was there until I saw him leaving but he was interacting with fans for a while from what I'm told.

Fox Sports had reporters/hosts Megan Olivi and Kelly Crull there as well doing remote shots. We dined with Megan and tried to feed her terrible ideas for her show Padres POV.

Here's the pic of me and @MeganOlivi from last night. Thanks for mentioning me on air! pic.twitter.com/UCWyMHpzOf

We saw Kelly Crull from across the way and jokingly told Megan, who was headed in that direction, that Kelly was probably looking for us and to let her know where we were sitting. She did and we finger waved to her from afar. The FSSD girls rolled their eyes at us. Darklighter was sitting with us at the time. He was too embarrassed by our antics and leapt up to go talk to her on his own.

Even though we hadn't visited with Kelly since Opening Day, once she came over it was like we had never been apart. We promised each other to make our talks a more regular occurrence.

@gaslampball Great to catch up tonight! Even if it was just a couple minutes! We should try to do that again before another 80gms goes by...

It was great catching up with a good portion of the Padres online community. All of the ferociously competitive bloggers were getting along well together, almost as if our very lives didn't depend on our blog traffic.