I don't own any basketball cards but that's about to change. I was checking out Cardboard Connection earlier to see what's new on the baseball card front and something caught my eye. Apparently Fleer just put out a basketball set of college greats and Tony Gwynn is included. I feel like we all know how good he was-- the fact that he still holds the SDSU season and career assists records and all that-- so it's apparent he's legitimately qualified for inclusion, not just there as a gimmick.

Including parallels, the San Diego Padres great has 13 cards in 2012-13 Fleer Retro Basketball. All are based on Fleer-branded basketball designs from the mid- to late-90s, one of the wildest and most creative era in the hobby's history.

The 13 cards are variations on five designs. I thought it was interesting that Fleer used the same designs for baseball and basketball sets in some instances back in the '90s. Of the five designs, I recognized three that I have baseball versions of. Since I don't own any of Tony's basketball cards yet, I'll show you some of the designs they are based off of. Then you'll see how rad they are and follow that link to go check them out if you haven't already. 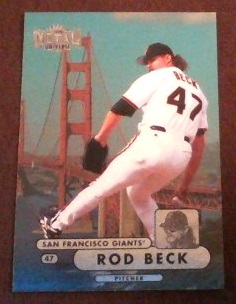 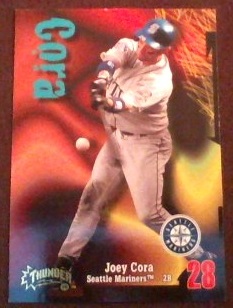 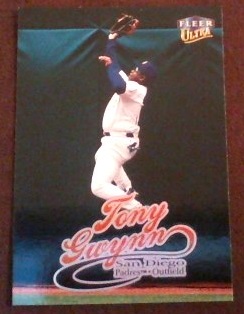 The design on the basketball version is slightly different. The flourish under his name is absent but the lettering is the same. I used to have a Dennis Rodman card from that set but ended up getting rid of all of the cards I had of him because I just wasn't interested in collecting him anymore. I equate Rodman to G.G. Allin: somebody I thought was cool when I was a stupid punk kid but nobody I want anything to do with these days.

But, digressions aside, the Tony Gwynn basketball cards are going to be fairly hard to come by for the most part. After a bit of casual research, it looks like the most common of them are going for five bucks a pop while scarcer ones are going for hundreds. Hundreds. Of dollars. Have fun paying that, somebody else.