If you don't remember Alex Cole, nobody can really blame you. He actually never played a regular season game for the Padres but-- like Harold Reynolds, Mike Scioscia, and Mark Prior after him-- managed to find his way onto a gen-u-ine major league baseball card as a member of the team.

It's fitting that this card features Cole carrying an equipment bag, because he was on the move fairly often around this time. After spending five years in the minors with the Cardinals organization, Cole was traded to San Diego for Omar Olivares right before spring training for the 1990 season. He was assigned to AAA Las Vegas and did fairly well, hitting .290 with 32 steals in 90 games before he was traded yet again, this time to Cleveland for catcher Tom Lampkin on July 11, 1990. After two weeks with AAA Colorado Springs, Cole finally made his major league debut with the Indians.

Cole had his most productive season in that abbreviated rookie campaign. He hit an even .300 in 227 AB, stealing 40 bases and finishing ninth in AL ROY voting. The 40 steals would prove to be his career high; his next highest total would be 30 with Colorado in 1993, in exactly twice as many games. He stole 29 more in 1994 with Minnesota but that was just about the end of the road for him. Injuries limited Cole to only 28 games with the '95 Twins and he played his final 24 major league games with the Red Sox the following season. Cole played 39 games at AAA for the Marlins in 1997 and spent the next four years playing independent ball in the U.S. and Mexico. 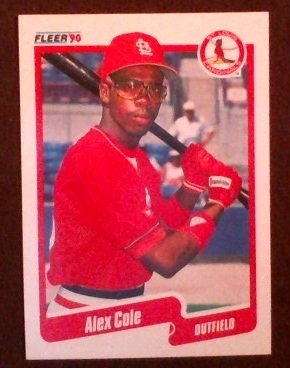 You have to appreciate the man's commitment to the MC Hammer glasses. And lest you think this was just a passing phase for him, no, he wore them to the very end. And speaking of the end, that is where this post has found itself. 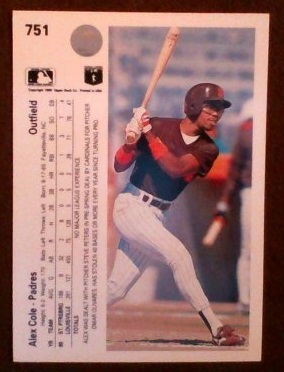