Padres trade Sheffield to Marlins, acquire Hoffman and others on this date 20 years ago

Share All sharing options for: Padres trade Sheffield to Marlins, acquire Hoffman and others on this date 20 years ago

The San Diego fire sale of 1993 was already well under way this day twenty years ago, when new GM Randy Smith sent young superstar Gary Sheffield and reliever Rich Rodriguez to the Marlins for minor league pitchers Andres Berumen and Jose Martinez, and rookie reliever Trevor Hoffman. Smith's predecessor Joe McIlvaine did his part before stepping down on June 9, trading the multimillion dollar salaries of Tony Fernandez, Darrin Jackson, and Mike Maddux before the season for guys making next to nothing. The Sheffield trade would not be the last payroll shedding move of the year; Fred McGriff would find himself headed to Atlanta, but that's an article for July 18.

Here's a look at each of the five players who were on the move 7,305 days ago. That's right; you can check my math. I didn't forget about leap days either. 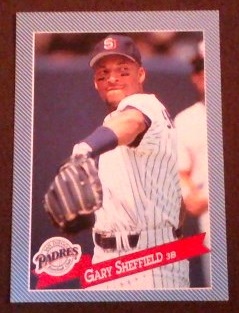 The undisputed centerpiece of the deal, Gary Sheffield was coming off a monster season and in the middle of another very good one. In 1992, he became the only player in team history not named Tony Gwynn to win a batting title. Sheffield added 33 homers, good for third in the league, and an even 100 RBI. While with the Marlins, he had another huge season in 1996, hitting .314 with 42 home runs and 120 RBI while leading the league in OBP and OPS. He won a ring with Florida in '97 and was traded to the Dodgers the next year in another famous fire sale. Sheffield continued to put up All Star seasons with Los Angeles, Atlanta, and the Yankees as late as 2005. After a couple years with Detroit, Sheff finished up his career with the 2009 Mets, hitting his five hundredth home run and nine more for good measure. 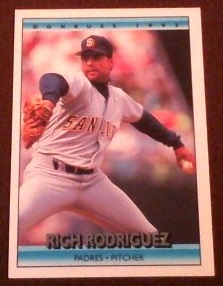 Rich Rodriguez had been a mainstay of the San Diego bullpen for three years before the trade went down. He put up an ERA under three in his 191 games with the team. He didn't do well when he went to Florida, giving up home runs and walks more often than he ever had before. Rodriguez was released by the Marlins during spring training the following season and hooked up with the Cardinals. He'd go on to pitch several more years of serviceable relief with the Giants, Mets, Indians, Rangers, and Angels through the 2003 season. 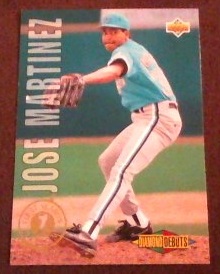 Jose Martinez was in his fifth minor league season when the Padres acquired him. Before being selected fourth by the Marlins in the expansion draft, Martinez spent four years in the Mets organization. He had three consecutive seasons with an ERA under two as a starter and even went 20-4 in A-ball in 1991. He scuffled in AAA between Edmonton and Las Vegas in 1993 and was sent to AA Wichita the following season where he didn't do much better. Martinez did manage to make his major league debut that year, pitching the only four games he ever would. He picked up two losses in those four appearances, giving up nine earned runs in 12 innings. It was back to Las Vegas in 1995. After another disappointing season, Martinez retired from organized baseball. 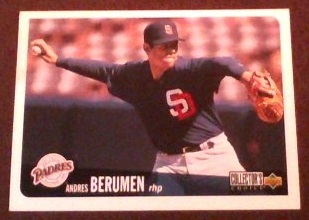 Like Martinez, Andres Berumen had pitched solely in the minors since being drafted in 1989, albeit not as effectively. He made it to AA for the first time in 1993 and despite being knocked around there he was promoted to AAA in '94 where he was also hit fairly hard. Defying reason, he still managed to debut with the Padres in 1995 and get into 37 games. He went 2-3 with a 5.68 ERA in 44.1 innings. Berumen made three appearances the following June and never returned to the majors. He had a couple more subpar seasons with Las Vegas before he was traded to the Mariners and did the same thing in Tacoma. After taking 1999 off, Berumen played one last season of organized ball in his native Mexico. When you put up an 8.22 ERA for Reynosa, that's pretty much your cue. 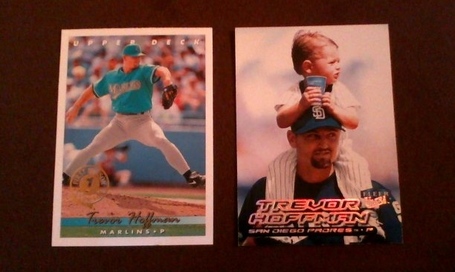 So, yeah, we totally won the trade. Since we all already know how it turned out- 552 saves with the team, retired number, icon status, and all that jazz- I'm going to talk about how awesome those cards are. I'm currently building the 1993 Upper Deck set from scratch because it's the greatest set ever. A few months ago I won an auction for a sealed Marlins team set. I opened it and saw that the cards had a special gold "Marlins 1st Year" stamp on them. I had to set this one aside. As for the second card, I've always been a fan of cards with kids on them but this one is the best ever.

I know I have cards of Fred McGriff, Vince Moore, and Melvin Nieves around here; now I just have to get one of Donnie Elliott before July 18.