They say a picture is worth a thousand words. Well, don’t tell that to those in the Verbose Club of America, of which I may be a charter member. I was going to write a long soliloquy about my circuitous route to becoming a Padres fan, but then I realized that no one really cares. I will say, however, that my path to become a fan of the Friars began in the most magical of seasons, 1984. That is the first baseball season after I moved to San Diego. I gladly hopped onto the bandwagon, cheerfully discarded every last remnant of my formerly favorite team’s paraphernalia, including autographs I obtained as a kid, and never looked back. My friends all said I was just a bandwagon hopper, but when the dreary, dismal 1987 season reared its ugly head and I remained faithful, all doubt was removed.

I had made arrangements via emails and texts with Darklighter to take the jersey in a handoff on Memorial Day in Seattle, at the Padres-Mariners game. For me, it’s a five hour drive, and I’d gone the day before, staying in the hotel directly across the street from Safeco. I’ve been to Seattle on many tourist visits, but never have had the chance to catch the Padres at Safeco. While it may sound silly, I was extremely excited and bit nervous to take the jersey into my possession. We settled upon the seventh inning stretch to make the hand off. I met Darklighter for the first time, and I could tell he was sad to see the jersey go.

I knew where he was sitting, so this threat was empty. 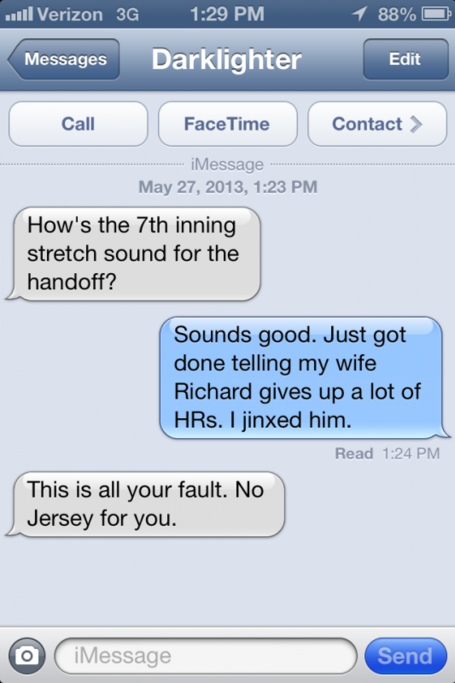 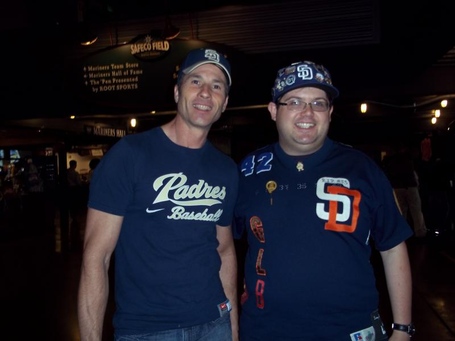 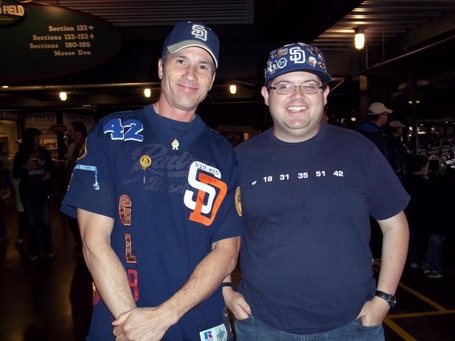 At Safeco there is a wall with license plate art for each team. Unfortunately, my arm obscured most of the Padres art piece. 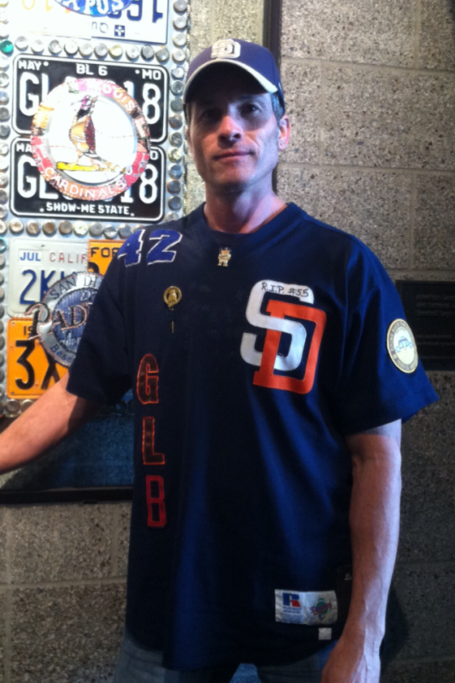 The drive back from Seattle to Spokane over Snoqualmie Pass was met with heavy rains. My intention was to have the jersey photographed with the towering Cascades in the background, but among its many magical qualities, stopping torrential downpours is not one of them. Once safely on the east side of the pass, the jersey got to take in the majesty of the mighty Columbia river gorge, and the Wild Horses Monument. 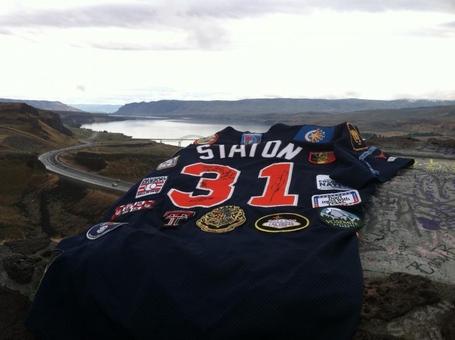 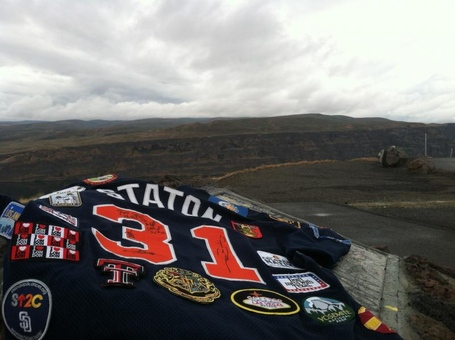 I'm pretty sure those horses came to life while the jersey sat watching. 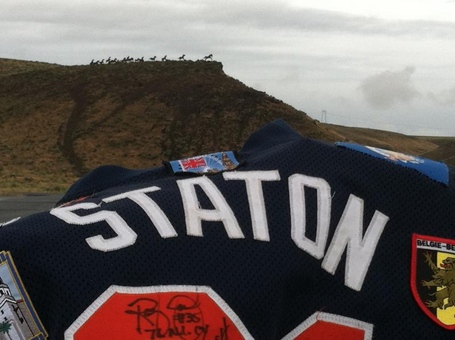 Because I live a fairly pedestrian life, I decided the jersey would get a break from the excitement of world travels and see what it’s like to hang out with a normal dude in a normal American city.

Here is the jersey hanging (haha!) with some of my ball caps. Yes, I do own a white lid, which is my Sunday and holiday hat (I think I got it on clearance from some website). 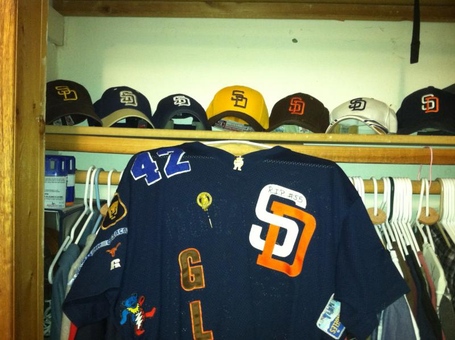 Next up, my morning trip to the gym. This gym does not allow photography without the expressed written consent of the management. So, risking my membership, I not only brazenly photographed the jersey draped across the bar in the squat rack, I did so with my flash on. Scofflaw? Hero? You decide. But I will tell you, I hit new personal records in all of my lifts while in possession of the jersey. The Staton jersey brings with it the weight of a thousand suns. 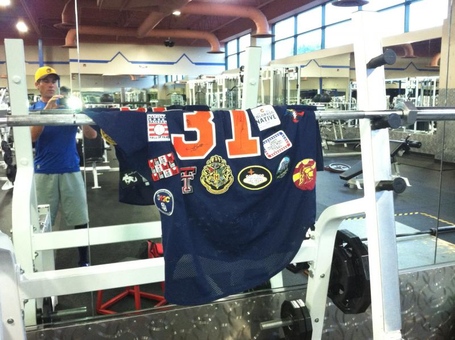 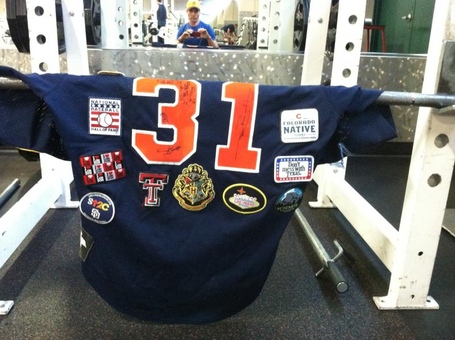 I had told everyone I work with about the jersey. I expected blank stared ambivalence to mocking ridicule, and at first people tended to go that route not understanding the specialness of the jersey. But once I brought it to my office, the realization started to hit people that this jersey has taken a wonderful, magical journey across the globe…and onto my desk chair. It spent the day across from my desk below my SDSU diploma. That’s me wearing lavender, because a real man can do that, and the jersey makes you a real man. Unless you’re a woman. 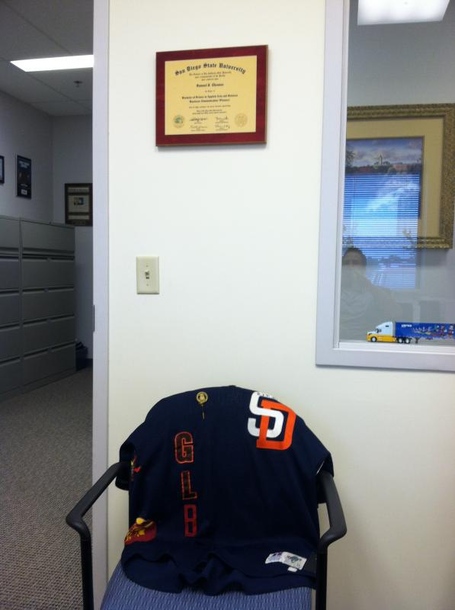 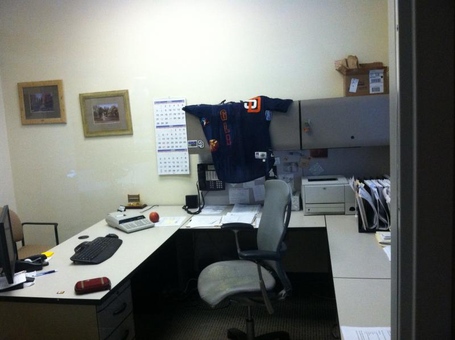 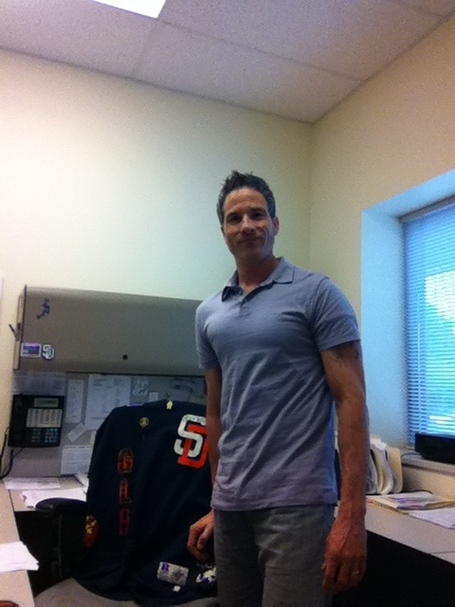 Every night after dinner I take my two dogs, Delilah Daisy and Lily Etta James, on a walk. Delilah was a street dog, abandoned by her stupid humans, and made her way to me within two weeks of my previous dog’s death. I prefer to think he sent her to me. What I didn’t know at the time was that she came with a uterus full of surprises, Lily being one of them. Because the father is of unknown breed, based on her looks I call her a German Beaglador. (Contrary to my GLB screen name, I'm a bit of a softie sucker when it comes to abandoned or stray animals.) Walking is serious business to my two pooches, and as you can see they were in no mood for poses. 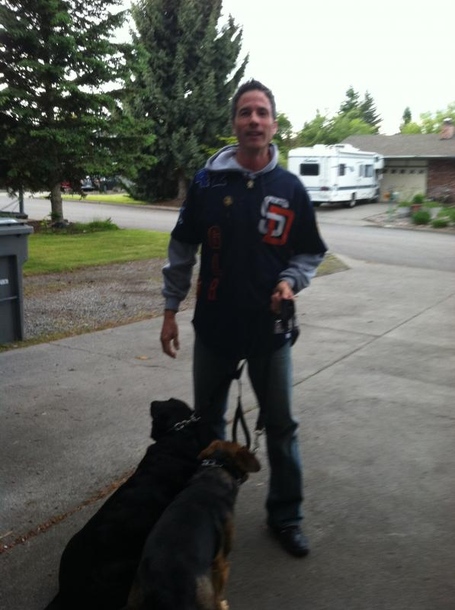 Six years ago I broke up a band I had formed and started a new one with a buddy. We play original, heavy rock, and we’re called Freak System. We don’t venture far and don’t delude ourselves with plans to make it big, but we have gotten to open for Edisun, Atomsmash, Bobaflex, Texas Hippie Coalition, and this coming August, Saliva. I would have loved for the jersey to hit the big stage, but since the timing was off, we settled for band practice and a small local show. At that show, we were told by numerous people that we had never sounded so good and so tight. I think you’ll see the reason why in these photos. 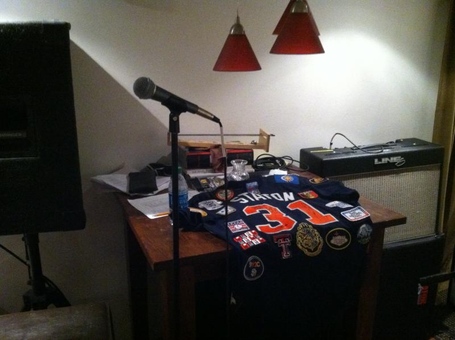 One more button to fall off the jersey: 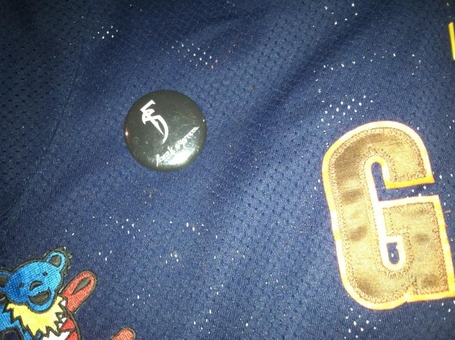 I play a tom drum on an intro to one of our songs. Here is the jersey protecting it and making us awesome.
: 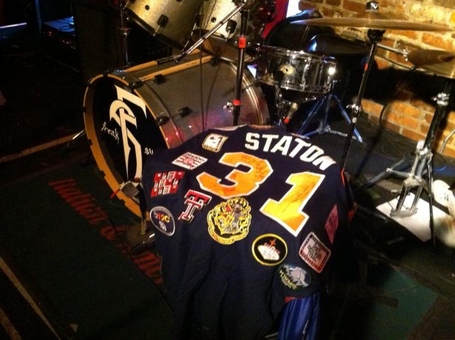 It was 100 degrees on that stage, so wearing it was out of the question. But it was there with us. 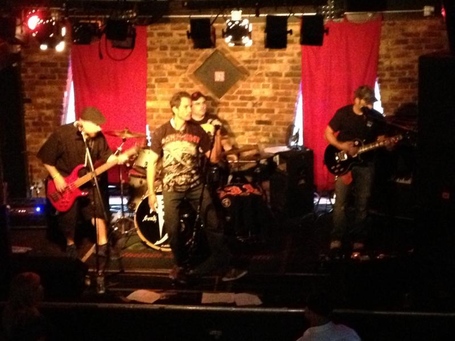 My dad has been a Padres fan since 1969. He went to SDSU, and met my mom in San Diego. He called me upon my return from Seattle and was mildly distressed that I hadn’t brought the jersey to his home directly from there. He had heard the story and was excited to have his time with it. He recently had open heart surgery and was restricted in arm movements, but he said that would not stop him from donning the jersey. As you can see, it fits people of all sizes and shapes – even an 82 year old man. And by the way, in the weeks since, he’s seen remarkable improvement in his health. One could say that’s modern medicine and the human body’s healing properties at work. I say otherwise. What do you think? 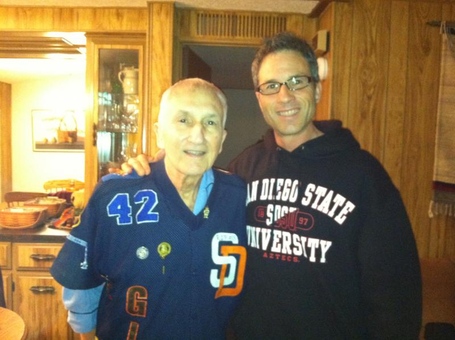 Finally, it is important to note that Dave Staton’s career began right here in Spokane, as a member of the Spokane Indians, a short-season single-A club. Unfortunately, they are no longer a Padres farm club, so the logo has changed, and the only Padres-era logo I could find was a large patch on eBay. I didn’t want that large patch to monopolize the jersey’s remaining space, so I opted for a pin of the current logo, one that was designed by the local Spokane Tribe of Indians. And we took a trip to Avista Stadium, where it all began, and where Mr. Staton was the 1989 Northwest Player of the Year, when he batted .362 with 17 HR and 72 RBI in 70 games. 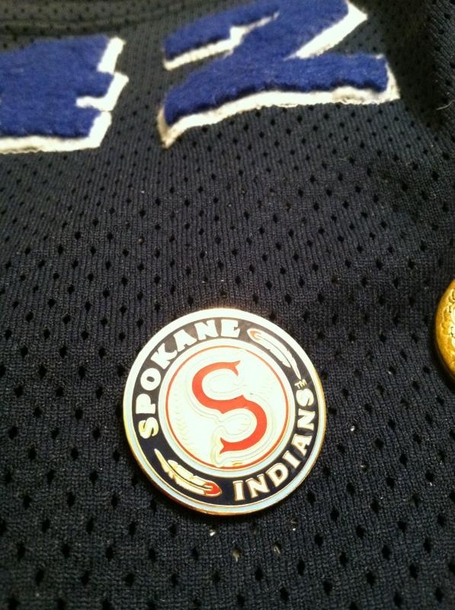 The season doesn't start for another week, so I had to settle for the entry gate. 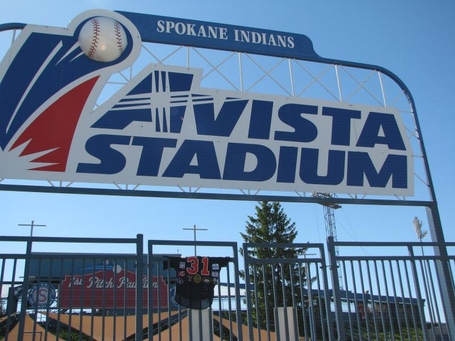 I found this archive in the Spokesman-Review regarding Staton (from 1992). 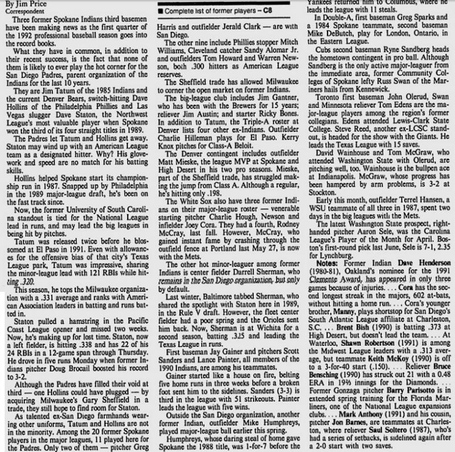 It was an exhilarating, and fun ride with the jersey. We all "joke" about its magical properties, but it was special to spend time with a jersey that has spent time with so many great fans all over the globe. Everyone with whom I shared the Sisterhood of the Traveling Jersey story loved the tale and everyone treated the jersey with reverence, many asking, "Is it okay to touch it?" The places it has been and seen are amazing. I was happy to share some time with it. 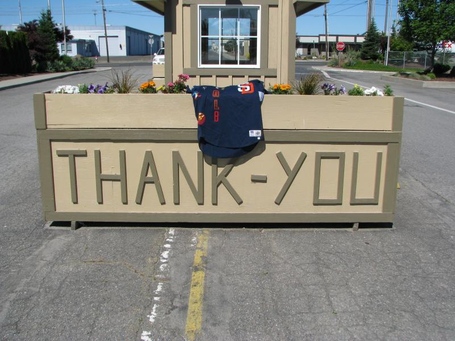