Tony Gwynn is one of the greatest players to ever pick up a bat. But what did scouts think of him before he was Mr. Padre?

Tony Gwynn is a first ballot Hall of Famer, fifteen time All-Star with eight batting titles and five Gold Gloves. He has a career .338 batting average, three division titles, and two National League championship rings. He's one of the greatest to ever play the game, and certainly the greatest to ever wear a Padres uniform. But it's easy to say that now. We have the benefit of hindsight. What were the scouts saying when he was just a college player?

Thankfully, we don't need a time machine to find out. The Baseball Hall of Fame has released enough scouting reports to keep baseball nerds happy for the next decade. Here's what Astros scout Gordon Lakey had to say about Tony in 1981 at the end of his career with SDSU. 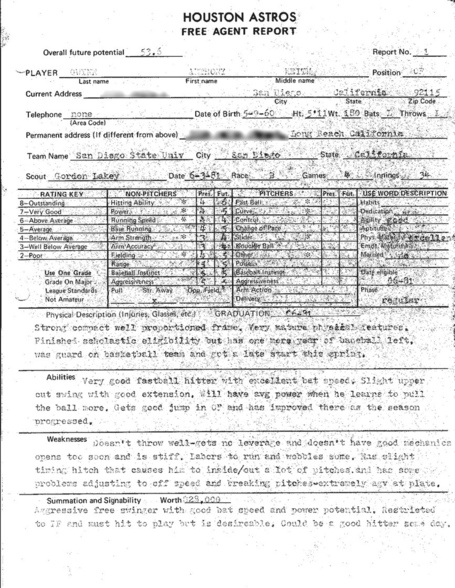 Most of those numbers are pretty reasonable, but there's one that obviously stands out. Future Hitting Ability: 6. Lakey saw potential in Tony, but he didn't get terribly excited about him. "Could be a good hitter some day." Well, that was an understatement. Lakey got another look when Tony played for the San Juan Senators in the 1983 Puerto Rican Winter League. 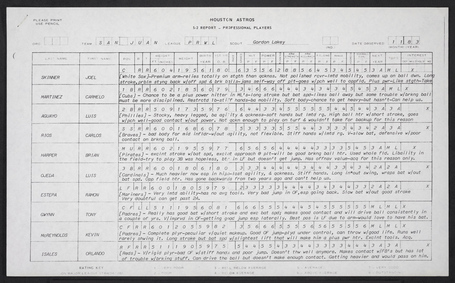 This was after Tony had put up a .309 average (a number he would never drop below for the rest of his career) and right before his breakout 1984 season (the first of his eight batting titles). Lakey saw a great improvement in Gwynn's fielding, though he'd rather have him in left field. But it was still the offense that mattered: The Astros "would love to have his bat." And who can blame them? They never had a chance, though. Tony was a Padre for life.