The Padres host the Cardinals in a three-game set, beginning tonight when Jason Marquis battles Shelby Miller on the mound.

The Padres split the four-game series against the Nationals to open up this homestand. Now they will welcome the Cardinals to Petco Park for three games as they try to keep the wins coming. 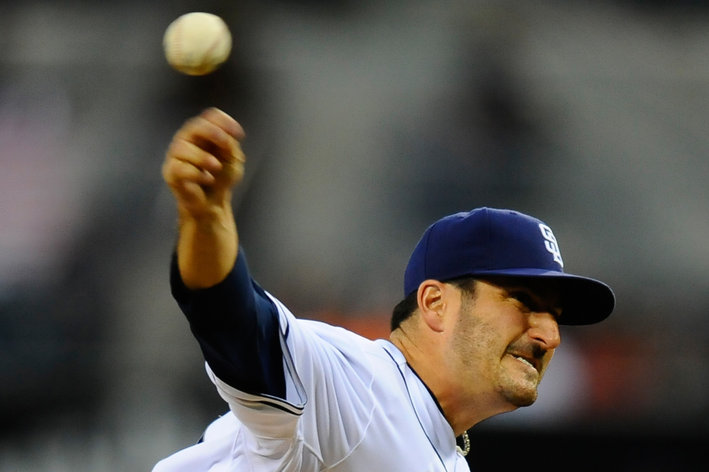 Has the Padres' wins leader been lucky or good?

Jason Marquis has been one of the more dependable pitchers on the staff this season. He's 5-2 with a 3.49 ERA over his eight starts and has won each of his last four. Tonight he'll face a tough opponent in the NL-Central-leading Cardinals as he goes for his longest win streak since 2007, when he won five straight for the Cubs. In his most recent start, he kept the Orioles to two runs (both solo homers) on seven hits and four walks in 5+ innings. Prior to that, he pitched an eight-inning gem against the Marlins, allowing no runs on five hits and a walk. The right-hander is 5-2 with a 3.80 ERA all-time against St. Louis, but has only faced four of their available starters: Ty Wigginton (9-for-24, five strikeouts), Yadier Molina (4-for-14 with a home run), Carlos Beltran (5-for-23 with a home run, 6 strikeouts), and Matt Holliday (4-for-20 with two home runs, five strikeouts).

The Cardinals won 14 of their last 18 games to improve to 28-15 on the season. They have been fantastic away from St. Louis, leading the majors with a 66.7% winning percentage on the road this year. Their roster boasts five players with at least 20 RBI under their belts and a rotation that leads the league with their collective 2.63 ERA.

Tonight's starter for the Cards, Shelby Miller, has been one of the more dominating pitchers, not only on their staff, but in all of baseball in 2013. His 1.40 ERA, tied with Clayton Kershaw, ranks lowest in all of Major League Baseball. He's racked up 57 strikeouts in 51 1/3 innings pitched while keeping opposing batters to a meager .182 average. And tonight, he brings a 14 2/3-inning scoreless streak to Petco Park. He's undefeated (2-0) in his last three starts, over which he's limited opponents to just one run. He's only pitched against the Padres in a relief role in the past, but they gave him some trouble. In fact, they were the only team to score off Miller in any of his six outings in 2012. He pitched three innings and gave up two runs to the Padres in San Diego last year, so he'll try to redeem himself in his very first start against them tonight.

Hopefully the Padres will have some offensive power left in them after yesterday's run fest. The team has won four of their last six games, including a sweep of the formidable Orioles and a series split against a very good Nationals team. In that span, they've hit eight homers and collected 33 runs. Youngsters Jedd Gyorko and Yonder Alonso have been two of the offensive leaders during that stretch, going 9-for-22 and 8-for-21, respectively, with Alonso homering in each of his last two games. We've also seen some good production out of the team speedsters, Everth Cabrera and Alexi Amarista, who are 10-for-28 and 6-for-14 in those six games. Cabrera has also succesfully stolen a base in each of his last five games, including three steals in yesterday's game alone.

Clear. Winds blowing out to right field at 5-10 m.p.h. Game time temperature around 65.

posted by jbox about 3 hours ago