Today is the twenty-fourth birthday of everybody's favorite little ninja, Alexi Amarista. Unfortunately for him, me, and the rest of his fans who will never love him the way I do, our hero still doesn't have a baseball card issued of him as a member of the Padres even after nearly a year of service. A few cards of him were issued when he was still with the Angels organization; I have two of them. 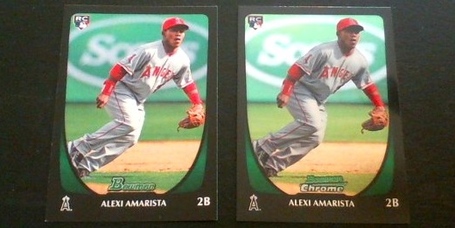 They look pretty much the same but the one on the right is the Chrome edition. Just one more way the folks at Topps sucker us nerds into buying multiple copies of pretty much the same thing. But anyway, cards of Alexi as an Angel are alright but what I really want is cards of him as a Friar. Several months ago I decided to take matters into my own hands and dummy up some cards of him as a Padre on classic designs. What follows are five of my favorites, in honor of his uniform number. As a frame of reference I've included a picture of an actual card from the set that was mimicked.

1962 Topps
An iconic set, this was the first one I attempted. Not bad for an idiot armed with nothing more than MS Paint, if I do say so myself. 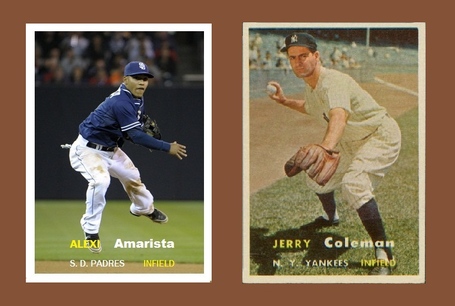 1957 Topps
This one was by far the easiest to do so let's instead focus on the Jerry Coleman card I based it off of. The Colonel's 1957 issue isn't the oldest or most expensive card I own but is by far my most cherished. 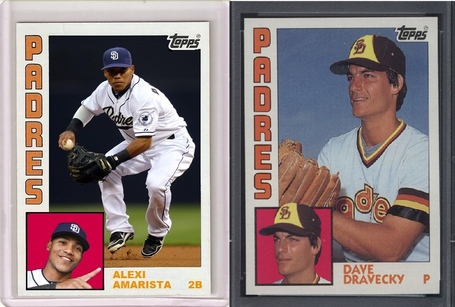 1984 Topps
This is another set I really like and one I actually have more than a handful of cards from. If I'm not mistaken, I have the entire team set except for the Gwynn. In time, I suppose. 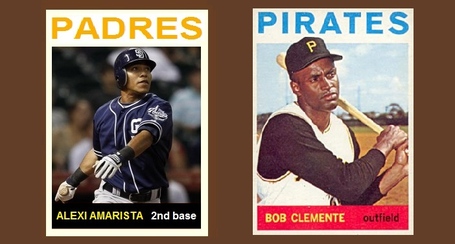 1964 Topps
Like the first two, another set that was issued before the Padres were a major league team. I originally did this with different colors but then 2013 Heritage came out using this design so I switched the colors over to the ones they chose. 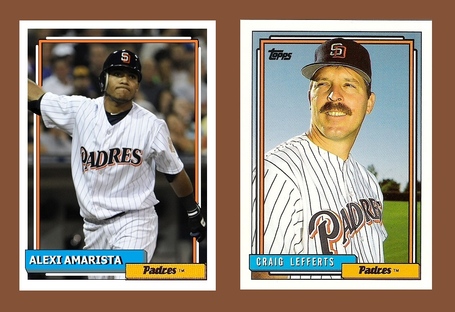 1992 Topps
Last, but definitely not least is my favorite of the bunch. The throwback uniform fits perfectly with the card design.

I'd like to eventually do one of him on every year of Topps, but I'm not exactly in a hurry about it. Hopefully Topps will save me the trouble of doing a 2013 issue when Series 2 comes out.