Sisterhood of the Traveling Jersey: Home Opener, 42 and 4/20 in Hippie Central

Share All sharing options for: Sisterhood of the Traveling Jersey: Home Opener, 42 and 4/20 in Hippie Central

I have been in the presence of the jersey multiple times, maybe even groped it once or twice, but this was my first opportunity to actually wear the treasured garb. I was a bit anxious to get it and plans to have it in my hands before getting to Petco Park for the 2013 home opener fell through. I still had faith that it find its way to me before the game and before meeting up with a group of friends and acquaintances in the 4th inning. My faith was rewarded when it was delivered just in time. In order to pass the time I took some pictures of the opening ceremonies. 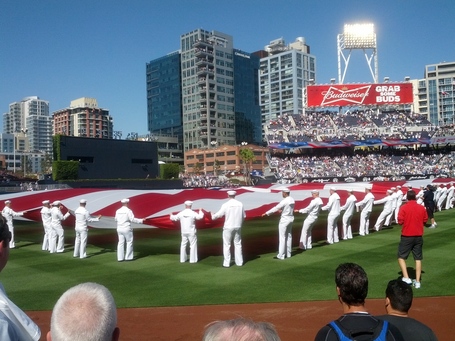 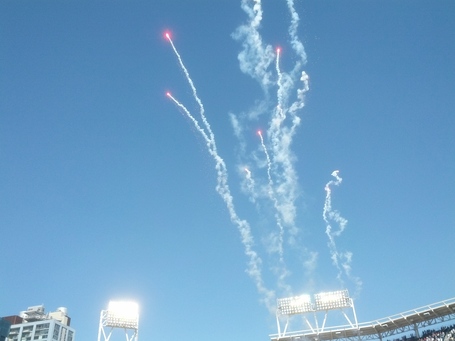 Once I had the jersey it was photo op time. The main picture in the article is from that photo shoot. Here's another with the lady next to me photobombing unbeknownst to her. 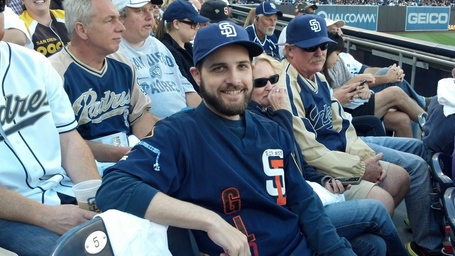 After that it was off to the Brickhouse Deli for a 4th inning meetup. Sometimes this area is called Neil's after Neil The Beerman who often works there and will sometimes hand out his own baseball cards. I have one somewhere. He was absent due to paternity leave. But her are pictures of me, the jersey and a motley crew. 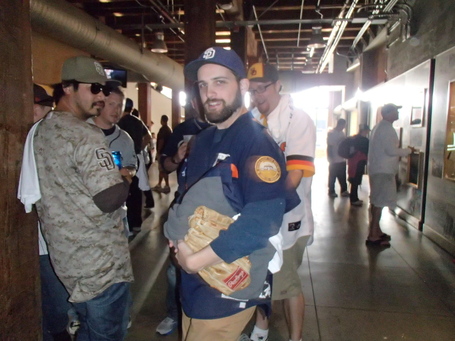 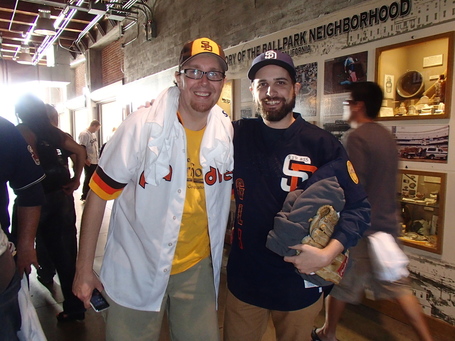 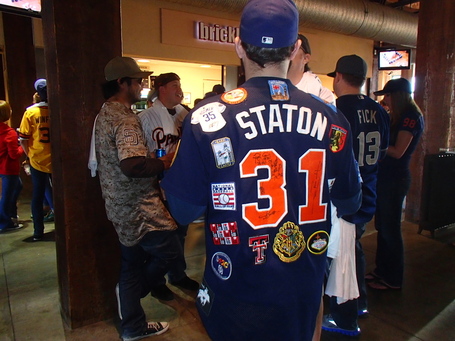 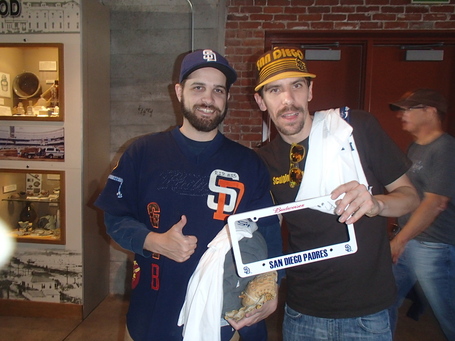 There were many more friends that came to the meetup (or tweetup, if you will) and I'm sorry for not getting pictures with them. Following this fun gathering, the only thing left was to sit back, relax and watch the Padres defeat the Dodgers.

The jersey then took a break for a few days and crashed on my couch. It was from there that it witnessed the Greinke-Quentin brawl and debated the aftermath. I would bring it back to Petco Park one more time, but first I had to show it something. That weekend was the first weekend at the box office for the Jackie Robinson biopic 42. I had some time in the afternoon before heading to Petco so I took it see the film. I'm pretty sure it enjoyed it as I know I did. 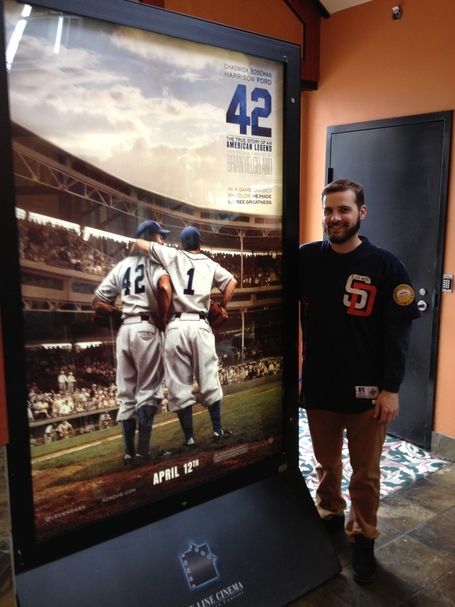 After that it was the aforementioned return visit to Petco Park. The Padres were giving away Chase Headley bobbleheads that day and my office collection of bobbleheads could use the new addition. I had a park pass for the game and I met up with a few of the jersey's sisterhood in matthewverygood and SDPads_1. I also found jbox and darklighter. Here's a photo taken by jbox, of course. 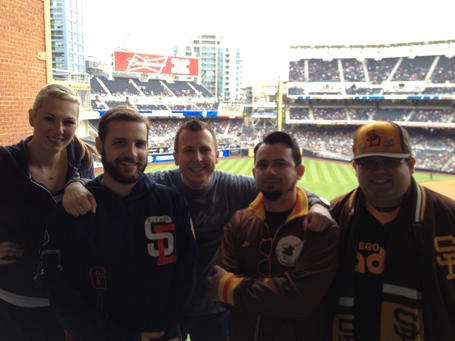 My girlfriend is also in the picture being very jealous of Matt getting closer to me than she is. The Padres would lose this one and the consensus seemed to be that the Headley bobblehead wasn't the greatest. Oh well.

The jersey then returned to my couch until we headed for San Francisco to see a game on 4/20. I will go ahead and say right now that the jersey did not do any unlawful while it was in the bay area. It did however witness some acts that may have been that the police seemed uninterested in pursuing. Here's a picture of a hill where it looks like people were gathered for a concert but were really just taking part in this act to which I'm vaguely referring to. 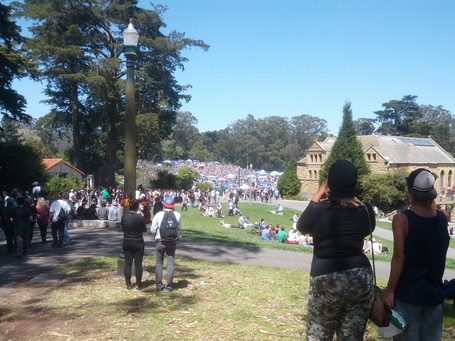 However, the jersey did not come to San Francisco to become a flower child. It was there to see more baseball. So, we hopped on the Muni from Golden Gate Park over to the stadium. I had a little bit of trouble standing so Stephanie had to hold me in place. Note the newest addition to the jersey's patches is in this pic. I apologize for it getting cut off, but it's a 42 patch. That has additional significance beyond the film and Jackie Robinson, which some of you may know based on my nom de plume. 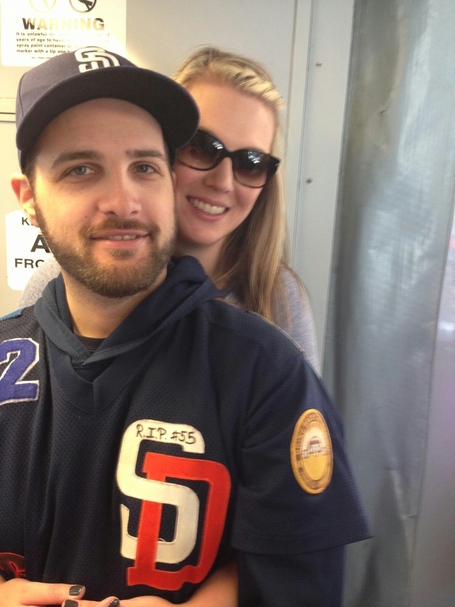 Here's a better look at the patch from when my Dad joined the sisterhood and modeled the new patchwork. 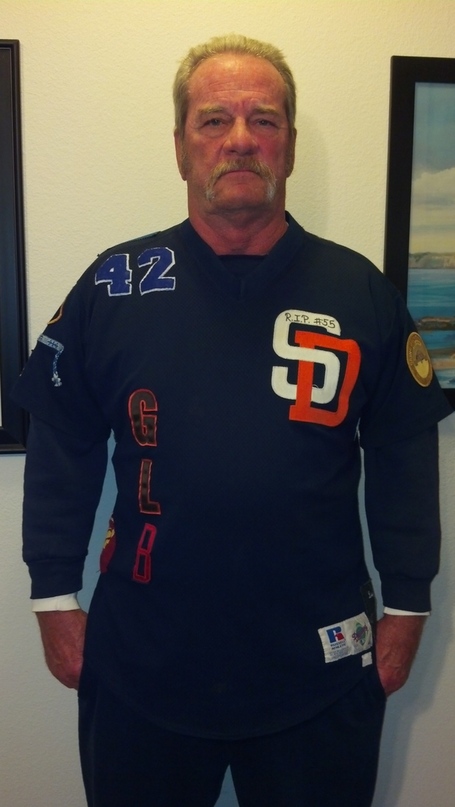 At AT&T Park they were giving away World Champion Umbrellas and the lines were long to get in when they opened the gates. I don't think I'd even want a Padres umbrella let alone a Dominican Republic one (although I heard there was a misprint and the umbrellas had Giants stuff on them, which is strange since they were advertised as World Champion Umbrellas not Major League Baseball Champion). So, Stephanie, the jersey and I went to 21st Amendment to get some tasty brews (including the famous Hell or High Watermelon), watch her favorite basketball player David Lee get hurt and hear the groans as the Warriors lost a playoff game.

At the stadium it was a gorgeous day that turned into quite a cold night. The game was close, but the Padres lost again. We got to do another tweetup with some new friends, but the location was quite cold and that was when Pablo Sandoval hit his game deciding home run. Sad face.

Oh yeah, and the jersey got a little action by the clock tower at AT&T Park. Our friend sneakily took this picture before we were ready to pose for her. 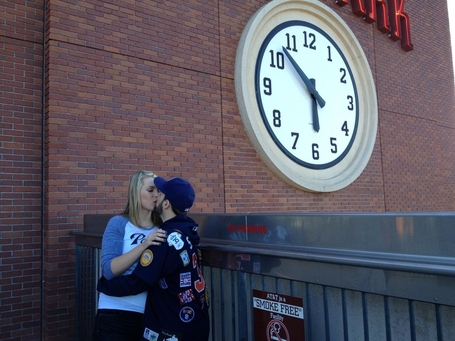