Lucky me! It's my turn to spread the word that the Padres are awesome and every other team sucks by wearing a jersey that represents the best of all sisterhoods. After packing all of my things, I headed over to San Diego International Airport. This is me right before boarding and as you can see I get a bit nervous the few minutes before getting on. 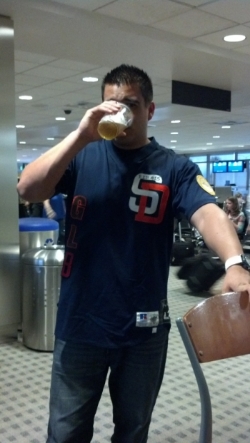 I've flown many times so I am not so sure why I get nervous. Once I landed I went straight to my brothers house and since he lives in Downtown Denver we headed out to check out Denver's nightlife. If any of you are in Denver I definitely recommend that you check out 1up. It is a bar that is full of old arcade games like Pacman and Street Fighter. 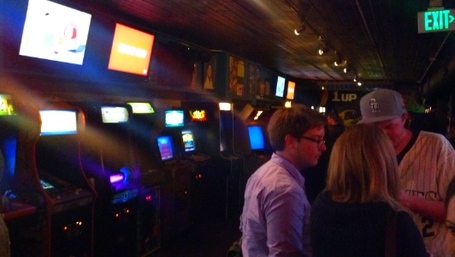 For some reason they really like Giant Jenga in Denver because I saw it at 4 or 5 bars that I went to over the weekend. 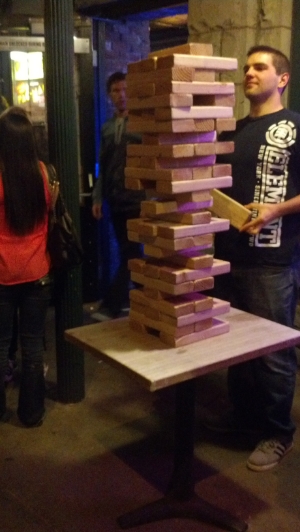 After a long night, we headed back to my brother's place and went straight to bed. We were up the next morning at the buttcrack of dawn because we had a 9 am tee time at Heritage Eagle Bend in Aurora. 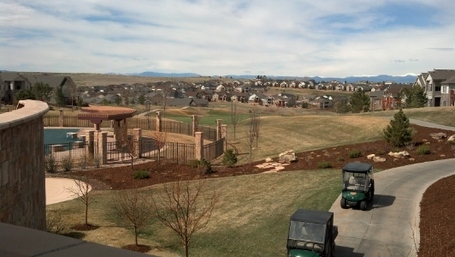 The jersey has some kind of magical power because I played the best game of my life. I shot a 130 for the day!!! I'm not that good... 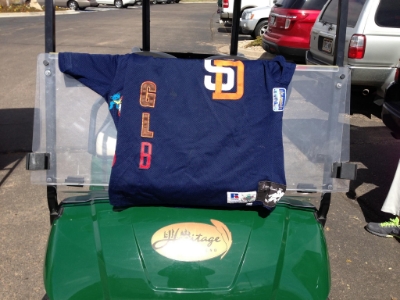 After my awesome golfing, we headed back to Denver so that we can head over to the game. After going to a few games in LA I had to prepare myself mentally for what I thought was going to be some intense heckling. We got to the stadium and went to the Sandlot Restaurant inside Coors to get some burgers. I saw a few baseball legends and after a few minutes of psyching myself out, I mustered up the courage to ask for a picture. 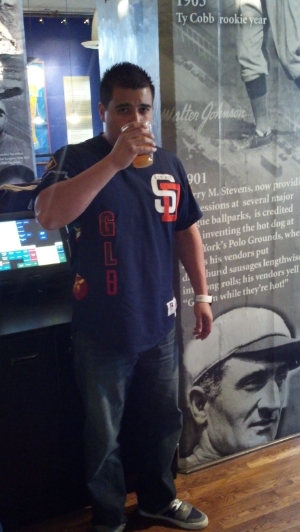 I headed over to where they make Blue Moon and did my best Superman impression. 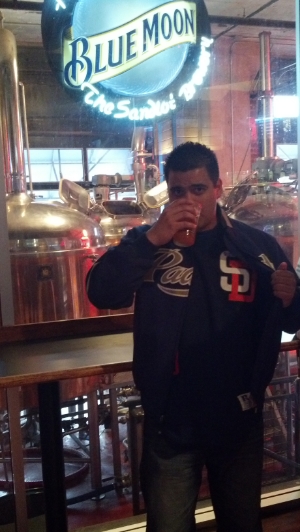 I walked around the stadium and noticed a great opportunity to go yard off of some Rockies pitchers. 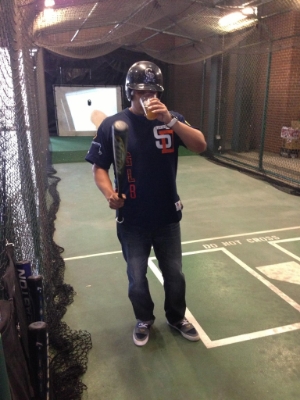 After hitting a few home runs, I saw the chance to be able to strike some Rockies batters out too so I gave that a shot. 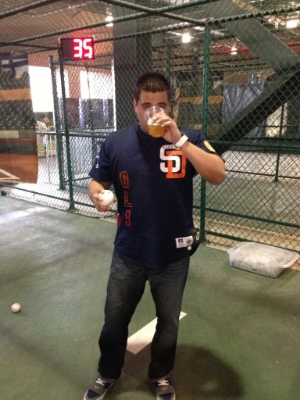 I felt like Steve Nebraska. I swear I throw harder than 35 mph. During the game a fan ran through the field thinking he was going to be famous or something. A security guard tackled him and I think that the security guard was Rodney Harrison because that was a textbook tackle. 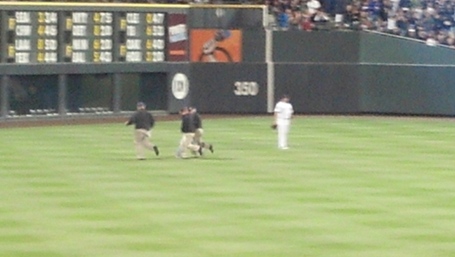 The next day we got up and headed over to the largest brewery in the world. 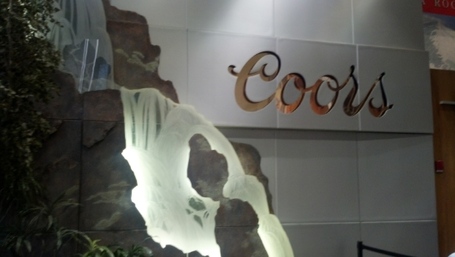 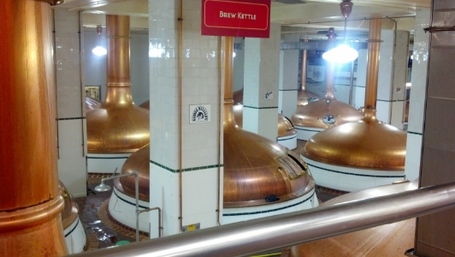 I wasn't too excited about seeing the beerpong beer brewary but after a while I was actually impressed with the size and the history. Plus they gave us free beer. 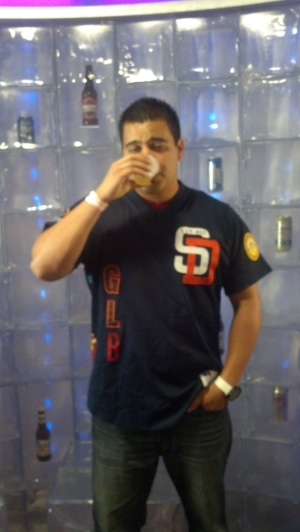 I look silly in that picture.

We went over to the drinking room where for some reason, they though it was smart to put a train going right through it. I was unknowingly standing on the tracks right as it was coming through and you can see here that I was scared for my life. 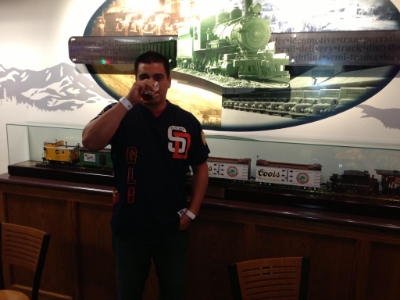 After we finished up here we headed back to Downtown Denver where we went to Breckenridge Brewery to have my last meal and drink some good beer. 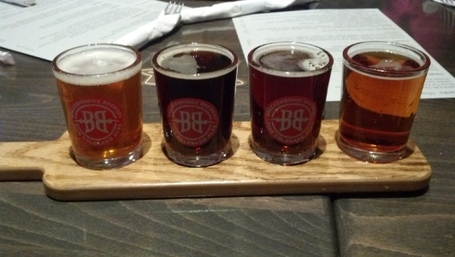 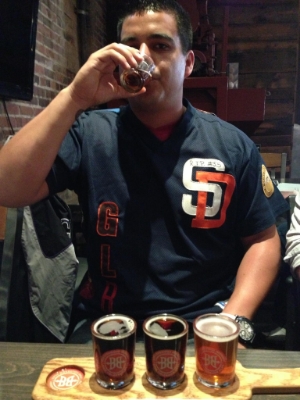 I really like Denver because it is so inexpensive compared to San Diego and the people are really nice. Everyone there seems really happy. It might be because of the availablity of the hippy lettuce or maybe thats just how people in Denver are. I remember that the worst heckle that I got at the stadium was some guy that yelled "Hey! Nice jacket, too bad it's the wrong team!" He high fived his friends like if he totally got me.

Oh and something tells me that they didn't put this up on the side of the stadium until after game 163... uggghhh..... 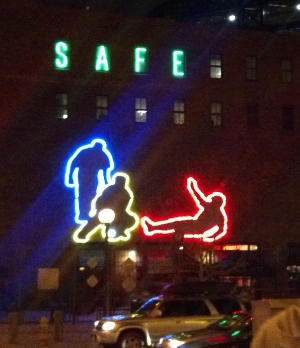 Places for the map: