Share All sharing options for: 42 Players Spent Time On The 1998 Padres. Name Them.

This year is the fifteenth anniversary of the 1998 National League Champion Padres team. Everybody loves an anniversary ending in -0 or -5 so now seems like as good of a time as any to test your memory of that glorious year.

You know what that means. Sporcle time.

There were 42 guys who suited up for at least one game for the '98 team. There were a few names that surprised me and a couple of others who I expected to be there but weren't; the years have kind of melded the '96 through '98 teams into some sort of super-roster in my head. But fret not if you're the same way; there's no penalty for wrong answers other than the amount of time it takes you to type "Craig Shipley" and erase it.

The quiz lasts seven minutes, which comes out to exactly ten seconds for each answer. No pressure. 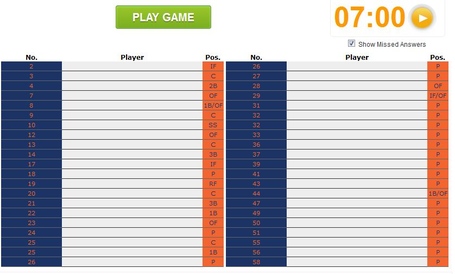 How'd you fare? Let everybody know in the poll below. Well, I guess that isn't letting everyone know since it's an anonymous poll, so go ahead and leave a comment too if you're particularly proud.