Petco Park was just named the 7th best ballpark in the country by TripAdvisor and strangely enough the 7th best attraction in San Diego. That doesn't mean they're going to sit back and rest on their laurels. Here come the changes:

The Padres mercifully decided to move in the fences during the off-season. It remains to be seen how the changes will affect the team's perpetually sluggish offense, but it couldn't possibly make it worse. At least I hope not. With any luck, years of psychological torture of fans and players is now over. 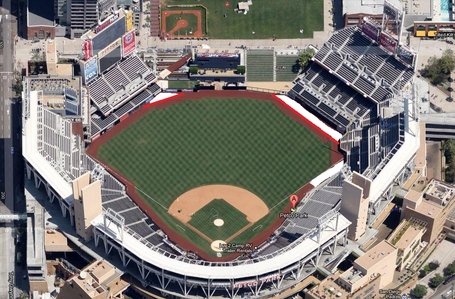 2. Out of Town scoreboard moved

The out of town scoreboard has now been moved to the facade of the second deck in right field, as seen here in this delightful Springtime picture.

This is what the same scoreboard looks like in a post-apocalyptic world:

So there's a new scoreboard in right field? #Padres twitter.com/CT2SD/status/3…

Due to the changes to the right field wall, the Padres had room to make a new seating area. There will be about 60 new seats divided into 4 seat clusters surrounding a table. My first reaction: those mesh seats are definitely going to leave marks on my thighs when I wear short shorts.

I've always hated the visitor's bullpen. It was so tacky having the players sit on a aluminum bench out on the edge of field with no shade. I get that they were trying to make pitchers uncomfortable but it seemed bush league to me. Very happy about their new digs. I hope the bullpen is surrounded by plexiglass and we can bang on it like at a hockey game.

You know what's effin' delicious? Phil's BBQ. They'll have a storefront located by the Showley Bros. Candy Factory in the Park at the Park. That's where they'll be serving a limited menu of earthly delights. They'll have their El Toro (tri-tip sandwich), half rack of ribs, slaw and my favorite the Broham (pulled pork sandwich). I'll be the one bathed in their BBQ sauce opening day.

@phileasfoggs @gaslampball Our cooks will do the cooking. There is no substitute! Can't wait...

I've never been to Wings-N-Things, but I hear good things about their wings. My favorite part about wings is the celery. What's it doing there? No one knows. That's why I like it, it reminds me of myself. What's he doing blogging about the Padres? No one knows.

I think Dex and I are the only Padres bloggers that don't drink beer on the reg. Which is one of the many reasons why we are outcasts in the Padres community. At least that's what I tell myself. I'll have 0-5 cold ones a year, just to be social, but my drink of choice is Kiwi Strawberry Snapple. That sh_t is made from the best stuff on Earth.

The rest of you beer nerds will be keen on the new Ballast Point Beer Garden in LF behind the scoreboard. Make sure to take pictures of your beer on Instagram!

Ballpark Brews will now be "Craft Beers of San Diego" at sec 109, 213, and 301.Will feature multiple SD craft beers exclusively