I don't even really know where to start. It was all such an epic ride that it's a bit of a blur. Let me mention that Dave Staton must have been oddly shaped. Baseball Reference says he is 6'5", but that seems insane. The jersey is quite short; I can't imagine Dave not showing some midriff while wearing it. Anyways, it was a tight fit on me, but I made it work I suppose.

A few days after receiving the jersey was an event I had been eagerly anticipating for quite a while....the local My Little Pony convention. Now I must explain that this isn't the My Little Pony from the 80s. It's grown up. There are dragons, shape shifters, chimera and manticores. Cerberus makes an appearance. It's epic. Lets not forget that there are also unicorns. Unicorns are awesome. I actually did a little bit of unicorn cosplay as I dressed as the character Twilight Sparkle. 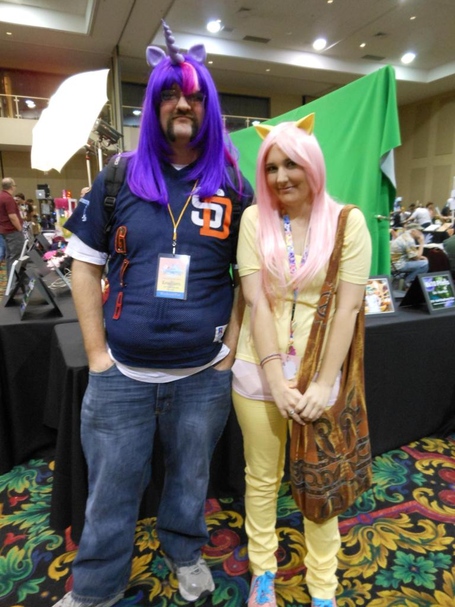 It was a good day. I got to meet a whole bunch of the voice actors from the show. Attended a few panels. Most of the fun was being around other bronies and sharing our love for the show. 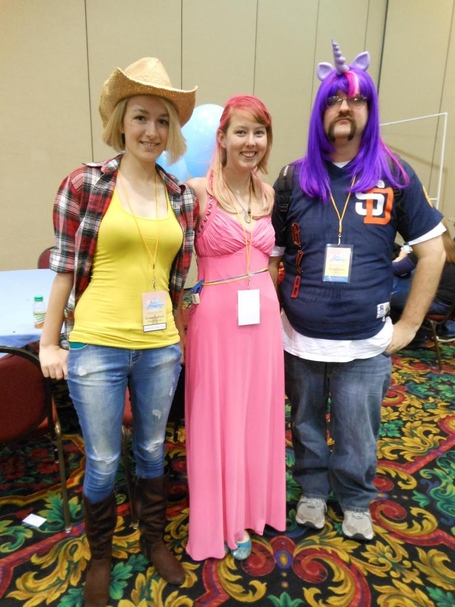 I wasn't aware this was a man until he started talking. It was kind of awkward....I was staring at his rack before I stopped him for a picture. 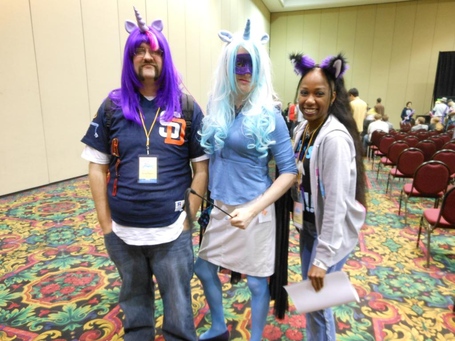 There was a mustache competition. I purposefully shaved to make my mustache match that of the judge. Apparently I was "pandering". I lost. I'm still pretty pissed about it. Whatever. I got to rub up on this chick though, so it's all okay I guess. 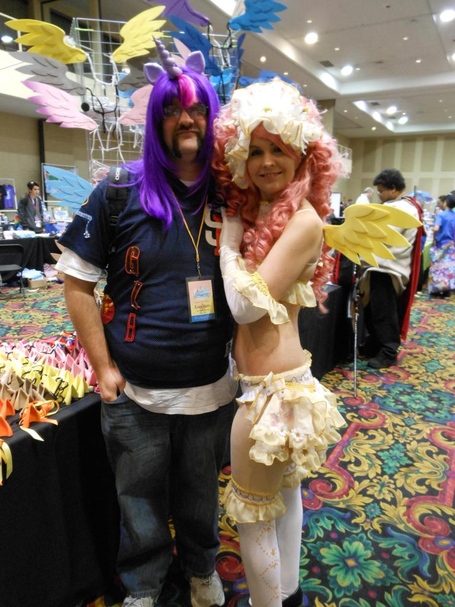 A few days later I went out and supported the local Las Vegas hockey team: The Wranglers. It was a good game. They were playing San Francisco and the Wranglers won the game 2-1. I later found out that the Wranglers clinched a playoff spot with that win. Good times. 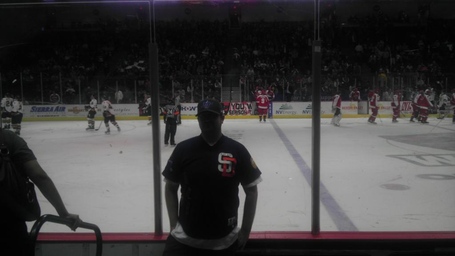 Next, it was time to take the jersey out on the town. I had planned to go to a lot more places, but I was pretty sick from the nachos the previous night or something.

I Started out at the Hoover Dam. Met a nice couple on the tour who were from San Diego. It was their 30th wedding anniversary. They said they didn't remember Dave Staton. Oh well. The dam is amazing to me still; it's insane how big it is and how quickly it was built. 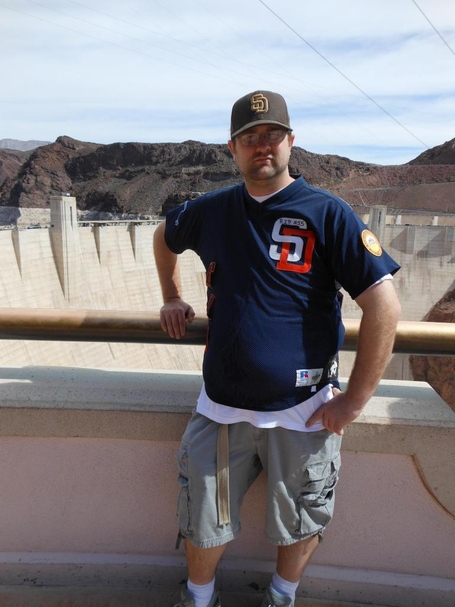 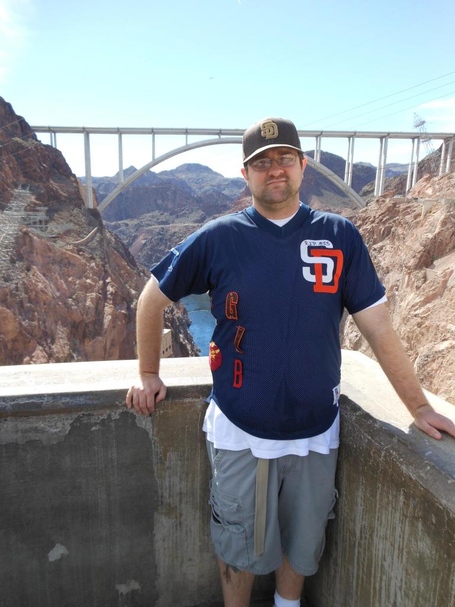 This is the powerplant on the Nevada side. The dam is capable of producing 1.345 gigawatts which is more than enough power for time travel. In two years you will be able to produce this sort of power with just a Mr. Fusion though. 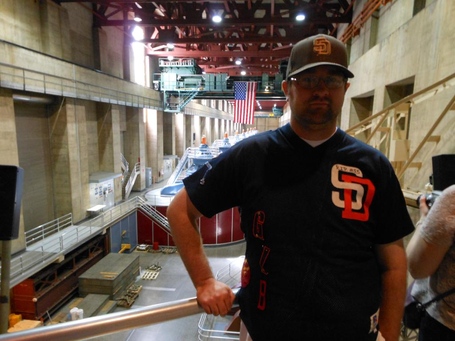 The Pat Tillman bridge is great. It's beautiful. It saves on travel time to Spring Training. It also offers great views of the dam. Yup. 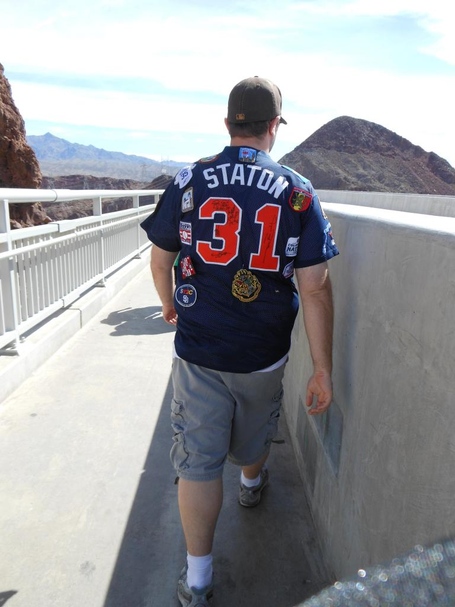 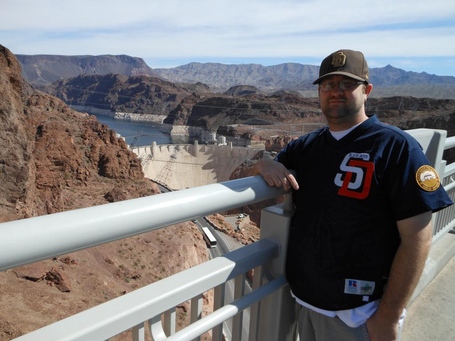 This is me in front of a sign. I'm throwing up gang signs....I think. 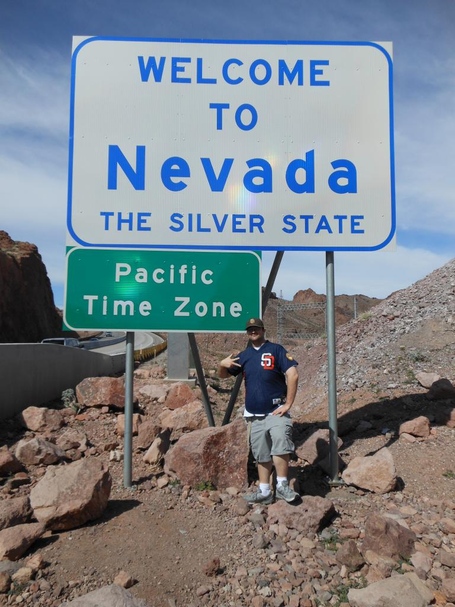 So while we are on the subject of standing in front of signs, how about some of this action? 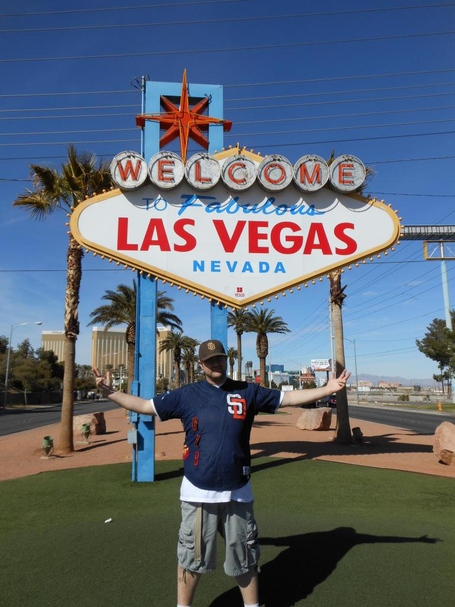 The Welcome to Las Vegas sign is quintessential Vegas. Showgirls are too. Although these were like 50 years old and likely addicted to meth. 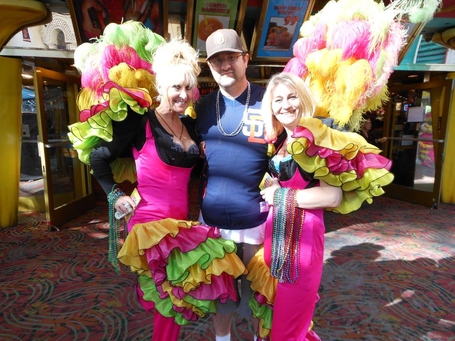 As I mentioned earlier, I was a bit sick so my last stop was the Neon Museum (I had planned on the Stratosphere and some other stuff). It was my first time to the museum and it was really cool. The tour guide was passionate about everything and it was really informative. 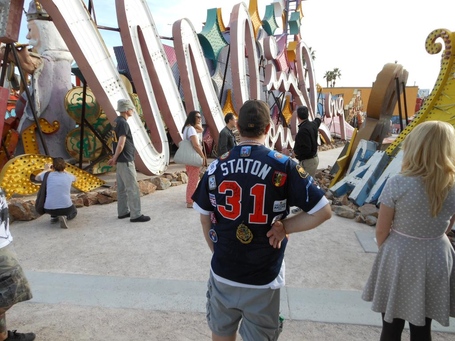 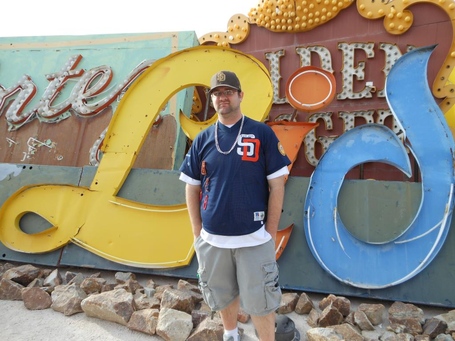 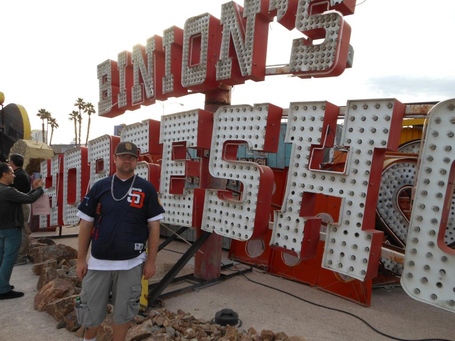 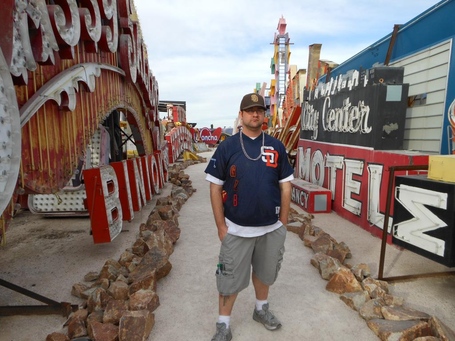 Well, that concludes the Vegas part of this writeup. Next I was off to Arizona to watch some baseball. I've sort of started a tradition the last couple of years of making my first stop in Arizona at Alice Cooperstown. They have a 22 inch hotdog (featured on Man vs. Food). Well, I'm a man....and I was victorious. 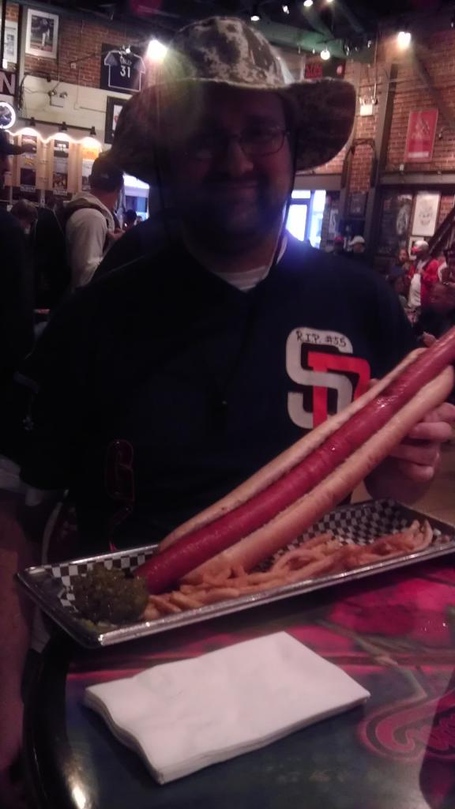 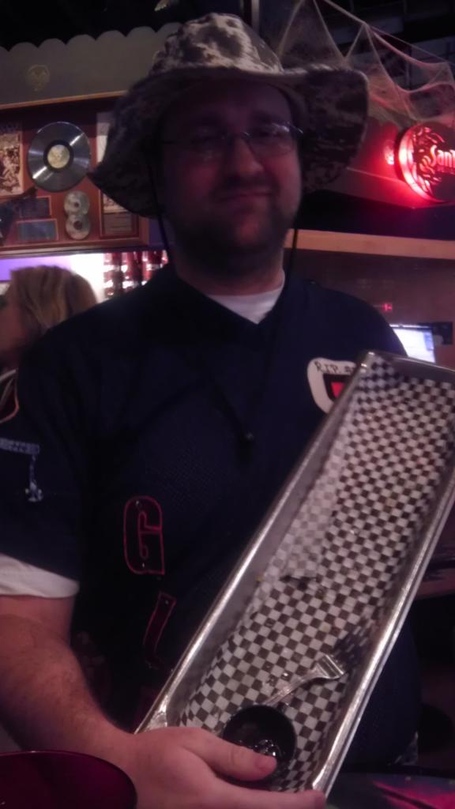 With a full belly I headed off to Chase Field to watch USA take on Mexico. I needed to take a leak; luckily the Diamondbacks had provided a pool for me to piss in. 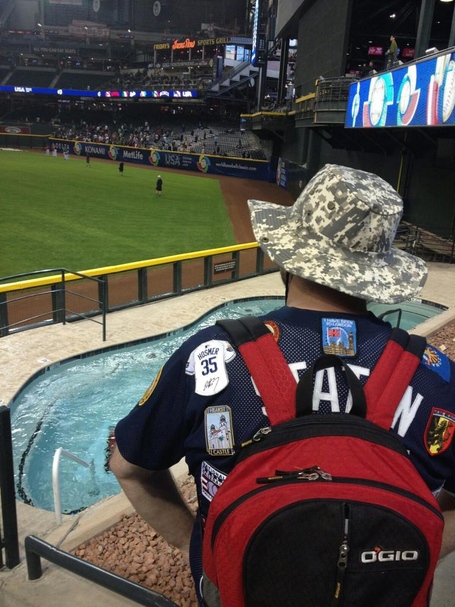 Anyways, Team USA lost. It was painful. Many of the fans rooting for Team Mexico were loud and obnoxious, like Dodger fans. The Team Mexico fans next to me were pretty pleasant though. One of them recognized the soccer patch that justgwynnbaby put on there. It was hard to explain why I had it on the jersey. Luke Gregerson did pitch a 1-2-3 inning though. 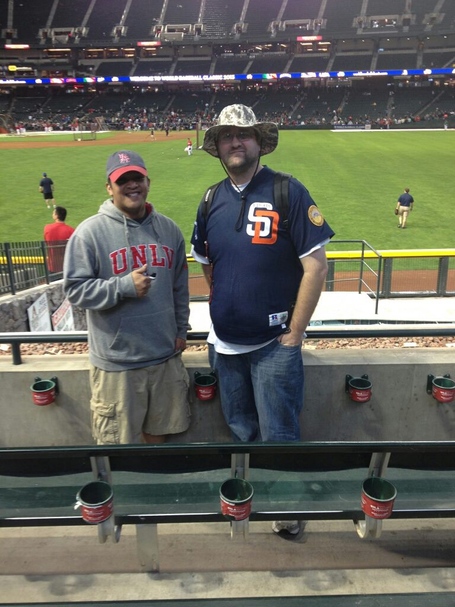 The next morning after getting some breakfast we headed out to watch Padres workouts in Peoria and then catch the game against the Rangers. 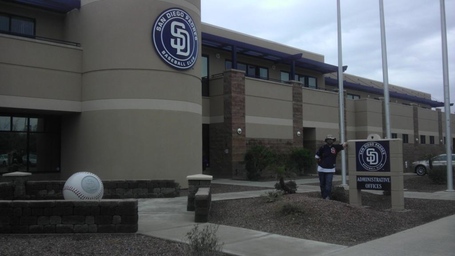 The Padres lost. Meh. It was a pretty uneventful game. Not much to say really. Dick Enberg was a couple rows in front of us, I think he was sleeping most of the game. 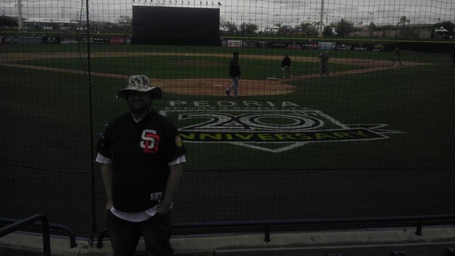 That evening we went back to Chase Field to watch USA vs Italy. We won. It was awesome. Denorfia went 0 for 3.

The next morning we randomly saw the wienermobile on our way to breakfast. 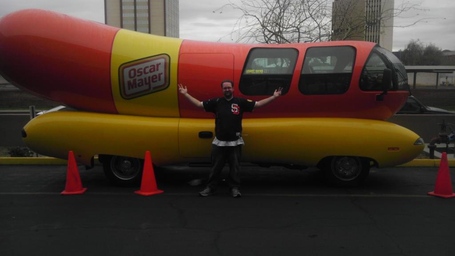 The final game of the weekend was USA vs Canada. The winner advances and the loser goes home. USA won. USA is awesome. 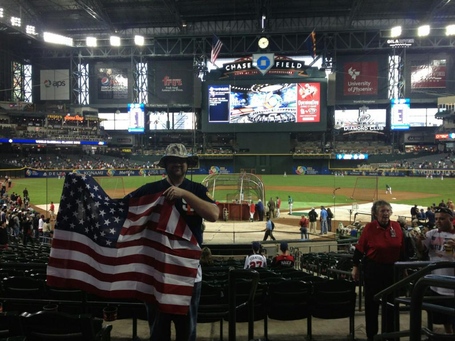 At some point over the weekend I was on the jumbotron. Well actually, the people in front of us were selected for the "muscle cam" in which they flex their "muscles" on the video board. 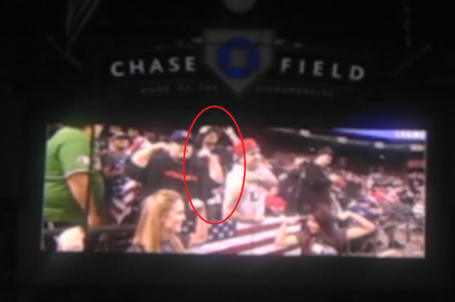 Anyways, I had a great time. I'll never forget my time with the jersey. It was just as magical as I expected it to be. 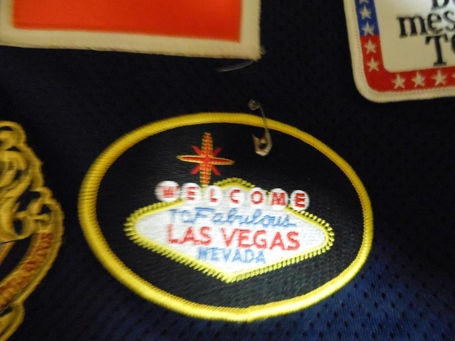