The channel that broadcasts the Padres has a new home for their studio broadcast. They gave bloggers and clients a tour to show it off.

The 2 hour lunch break on a Friday isn't always easy to swing, but I felt Gaslamp Ball needed some inside access to this studio tour and I did what needed to be done. In other words, I RSVPed to the invite that was sent out to many of the local bloggers. When I arrived, a couple of the guys from Padres Public were there and we were taken straight away to the studio where we were left to wander until everyone else arrived. Pretty soon we were shaking hands and introducing ourselves to Tom Garfinkel, Mark Grant, Mike Pomeranz, Mark Sweeney and Fox Sports San Diego executive producer Jeff Byle.

Before we get to the Fox Sports stuff, let's talk a little about the field at Petco. Some may have seen the pictures on twitter that show that the grass is gone. Along with the obligatory jokes of the sandbox expanding or the Padres going old school or whatever. I overheard Garfinkel explaining to sdpads1 (or RJ's Fro, if you will) what was going on. Apparently, the nice grass gets overrun by some other type of grass. And while it may appear to be fine, the uninvited grass causes divots and needed to go. They don't do this every year, but they are doing it this year.

Back to the tour. Jeff Byle did the honors of speaking and told us about the set. There are few pieces to it. One piece is the familiar area with the window overlooking Petco Park. 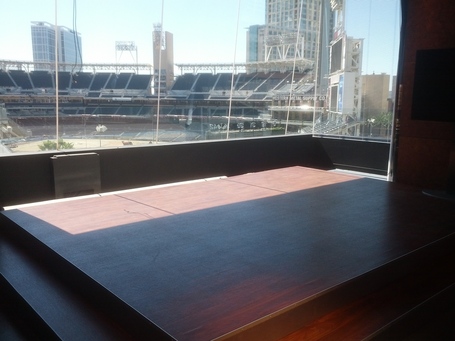 This area is a little bare right now. The plan is to put couches here and conduct pre-recorded interviews. They don't want to use it as the set for pre and post game shows because it is difficult to light this area for more than a few minutes. It's a pretty view, but that beauty can get lost. I stood on this part of the set. A little rickety so I hope the couches distribute weight well or something.

On to the main area of the set. Before we get to the picture, one thing to note is that this set will only be used for road games. Pomeranz and Sweeney aren't going on the road trips anymore and instead will be here in San Diego at the studio. For home games nothing changes. They will be out in Park At The Park with that same set from last year. Jeff Byle defended its usage believing that it provides great TV visuals and allows for fan interaction. Anyway, here's the set: 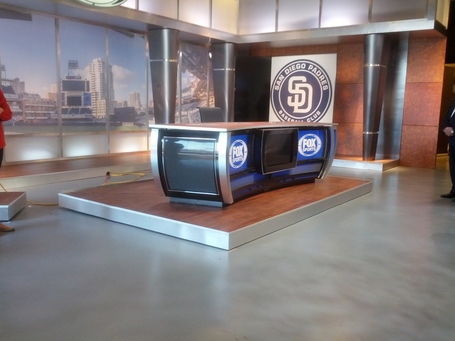 Very professional looking. We were told that they used the set designers that did the national Fox Sports studios. Some of the pieces were taken from the NFL pregame broadcast sets. One of the buzzwords mentioned was flexibility. There are three monitors (two shown above, you can see the other one in other pictures). The Padres logo can be swapped out. The background is also interchangeable. So, for example, when they do Aztecs games in the future they may swap out the Padres logo and the Petco Park backdrop for the Fox Sports Logo and a downtown San Diego backdrop. In fact, we got an impromptu demonstration of the change. Jeff Byle went backstage to do it, but called in Mike Pomeranz for help. Here is Mike Pomeranz standing with Mark Sweeney unsuspectingly: 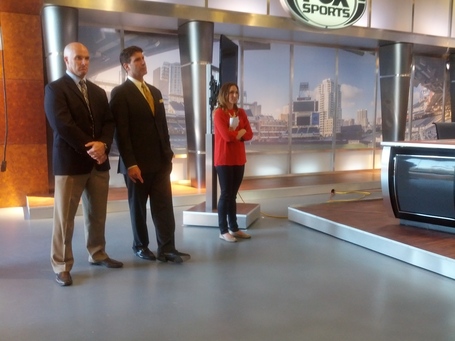 And here he is running to the rescue, jacket now off and lying on the desk: 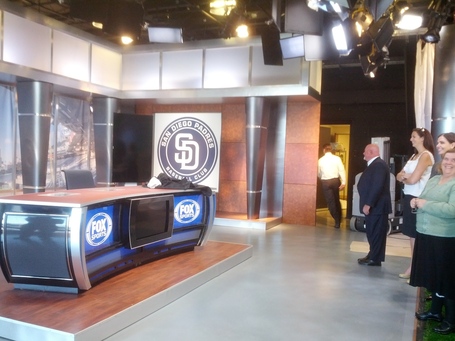 Speaking of jackets, the Fox Sports San Diego standard attire for men seemed to be jacket and dress shirt with top button undone. Maybe some of those wearing that were clients too. Except Mike and Mark. They had ties. Anyway, back to the backdrop demo. 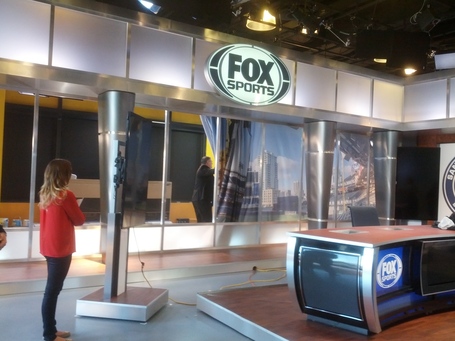 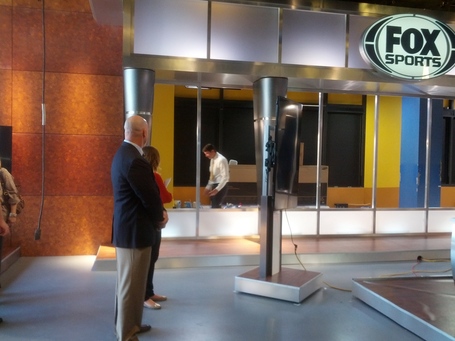 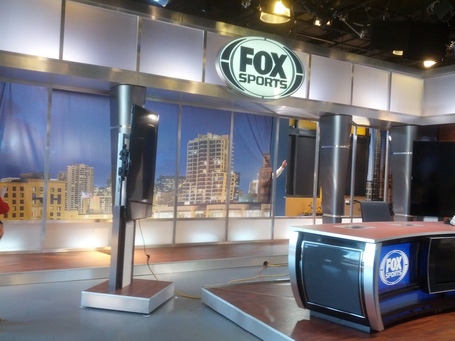 The final part of the studio is the demo set. Some fake grass and another monitor. This area is meant to be flexible too. They can put down a home plate, a pitcher's rubber or just swing a bat around. The grass rolls up so that cameras can film the other set. They want to use this area for some pre-recorded stuff, but also to have Mark Sweeney demonstrate things happening in the game as the game is happening. 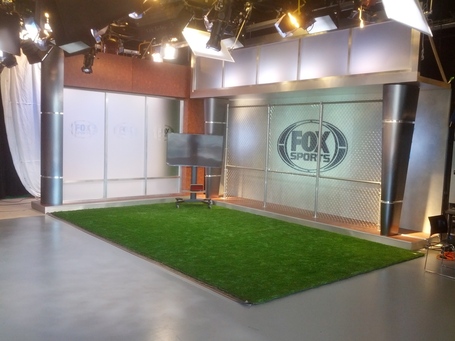 Fox Sports San Diego Senior Vice President and General Mananger Henry S. Ford spoke up and said this set is "Badass". And that we could quote him on that. Other regional Fox networks do not have these kind of sets. Including Los Angeles. San Diego is a cut above and they like it that way. They are trying to build something here. Build the fanbase. Build knowledge of the sports they cover. Make it look "badass" when people tune in.

Another area they have is their own fan cave. An area to watch the Padres when they are on the road and follow the other games going on at the same time. 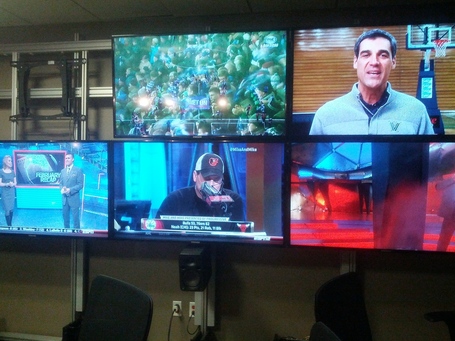 After that we went to lunch. The break room lunch area overlooks the park and has a balcony. I lingered there for a while after almost everyone else left. Talked to various people. Good times. Good tour. I hope I gave you a nice taste of it here.