We were invited to the Padres Awards Dinner last night at the San Diego Hall of Champions. It's a classy affair with a dress code, VIPs and plenty of awkward conversation. Jonny and I represented Gaslamp Ball, dressed up in our Sunday's finest and did our best to be personable.

We rushed into Hall of Champions through pouring rain to check-in with Pad Squad Elizabeth. She was as delightful as ever. She greeted us with her ever present dimples and assigned us to a table.

If you ever feel the need to feel inadequate and physically inferior then attend a reception full of professional baseball players. I'm above average in height and well below average in weight and these guys towered over me. I felt a childlike sense of wonder as I looked up at their thick lustrous hair and down at their cage free muscular physiques.

Jon and I wandered the Hall of Champions sipping wine, checking out the remodeled Padres wing and gawking at player's girlfriends and wives. The HoC is home to all 5 of Tony Gwynn's Gold Gloves and all 8 of his Silver Slugger awards. They also have Steve Garvey's white cleats and his batting gloves from the day in 1984 that he single handedly changed Padres baseball forever. I wish I could have put on a white pair of archivist gloves and handled the memorabilia. If you get a chance I'd definitely recommend peeping it.

We spoke briefly with Mentor and Bob Scanlan but our attempts at mingling with baseball players never panned out so we decided to get to our assigned blogger's table early so we wouldn't have our backs to the stage all night. We were too late. There they were, a half dozen Padres Public bloggers already in their seats talking about their planned domination of the Padres blogosphere and probably beer. I left Jon alone with them and went to introduce myself to the new Fox Sports San Diego reporters. .

Kelly Crull, Megan Olivi and Laura McKeeman were all very nice and well mannered. I did my best to be charming. New field reporter Laura explained that although she is dating Rockies pitcher Josh Rutledge she is not a Rockies fan. She made it perfectly clear that he was a lowly minor leaguer when they met with a slim chance of ever breaking into the Majors. She was as shocked as anyone when it happened. She stressed that she is a Padres fan now and doesn't plan on being very supportive of Josh's career. I nodded my approval.

Next I asked Padres Weekly host Kelly and Padres POV host Megan what the difference was between their shows. Last season after a few episodes the two shows seemed to blend into one by covering the same subject matter . They agreed and said that Padres Weekly will take a more serious tone focusing on baseball business and Padres POV will be focused more on the players off the field and the city.

Megan tried to pick mine and the Avenger-in-Chief's brains by asking a complex yet broad question about life as a baseball fan in San Diego. We asked if she could be more specific and when she tried we answered with a blank stare. We weren't much help.

Food arrived shorty thereafter and we chowed down on our salad laced with fruit starter, fish and steak main course and finally our choice of chocolate or red velvet cake dessert. It was tasty. 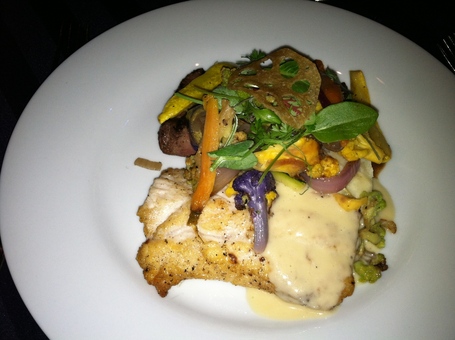 Dick Enberg emceed the event. He introduced executives and ball players, threw around a few "Oh My!'s and then started handing out awards. You can read up on the results in Corey Brock's article.

I think my favorite part of the night was when Chase Headley was awarded a surfboard. It looked to be a nice 6'3" fish tail but it was imprinted with his own image to ensure that he'd be ridiculed if ever actually tried to use it.

What happens when you lead the NL as a #Padres? You get a surfboard of course #Congrats #AwardsDinner instagr.am/p/Vf1UfCzHoB/

Good times all around. Thanks to the Padres for having us.