Share All sharing options for: Nine Padres In 2013 Topps Series 1

Series 1 of 2013 Topps baseball cards dropped over a week ago but I held out on getting any until this past Wednesday. I happened to be in the neighborhood of the local collectibles shop I used to frequent and had a spare two bucks so I decided to get my first look at them in the flesh.

The checklist was "leaked" about a week before the release date so I knew which Padres I had a chance of getting. I knew it would be a longshot since there are only nine in the 330 card first series but, hey, it was worth a try. Here are the Friars that are ripe for the picking:

I have a few quibbles, if only so Marver doesn't accuse me of being a Topps employee. I don't really see why our first player represented would be one who participated in all of one game last season and isn't on our roster or anybody else's. Also, I hope they use Tommy Layne's actual, preferred name in future issues.

So, knowing who I was looking for, I cracked my first pack of the year right there at the counter. I could be dramatic and list off every stupid Heyward and Nieuwenhuis I sifted through but you don't care about them or the Yankees' gimpy shortstop so I'll just tell you I had no luck.

Or did I? The proprietor told me to hold on a second, that he may have gotten some Padres from the packs he'd ripped. He leafed through a stack, found Kelly and Venable's cards and handed 'em over, on the house. Heck of a guy.

As for the design, I think it's a step backward but I've come to expect laziness from Topps since they have no competition anymore. The cards aren't exactly ugly- the great photography ensures that- but they just look, well, half-assed. The backs are nothing to write home about; they are once again photograph-free and include a ridiculous "Career Chase" statistic. For instance, did you know that Casey Kelly is 5688 Ks away from Nolan Ryan's record or that William Venable is 1320 SBs away from tying Rickey? That's some real need-to-know stuff.

All in all, it's just another edition of flagship. Nothing remarkable, nothing too egregious. There are a ton of Gwynn inserts (Gwynnserts!) available but they're scarce enough that you shouldn't hold your breath unless you buy by the box. Me, I'll just wait for a fan of some other team to find them and trade them to me. 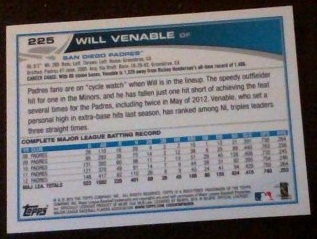