Akinora Otsuka to run Half Marathon tethered to blind runner

Share All sharing options for: Akinora Otsuka to run Half Marathon tethered to blind runner

Beloved former Padres relief pitcher Akinora Otsuka is going to run the SD Half marathon next month. He'll do it tethered to and in support of a blind runner.

Mitsuhiro "Hiro" Iwamoto is that blind runner. He is a Japanese Sailor and San Diego resident who is raising money for his charity seewhatisea.com. The money raised will be used to buy a sail boat for high school students in Fukushima, Japan. He wants to encourage the people of Japan to overcome their fear of the sea after the devastating 2011 earthquake and tsunami.

Aki will have to overcome his fear of running 13.1 miles. As a former baseball player, he isn't used to this type of training and questions whether he can complete the athletic feat.

"I haven’t run this much distance since high school," Otsuka said with a laugh. "[During] the first practice, I was supposed to lead Hiro, but I was led by him instead!"

Hiro says that Aki has been running and training a lot lately so he's confident they will finish and he won't have to drag Aki across the finish line.

Last year Hiro ran 10:15 minute pace to finish the inaugural SD Half marathon in a time of 2:14:17. In a post race interview he said the most difficult part was the Washington St. hill. I ran the race too and let me tell you, that hill was a b_tch. Hiro will overcome blindness again, but Peroneal Tendonitis has me sidelined.

To get an idea of what they will look like, watch this video of Hiro running in last year's race: 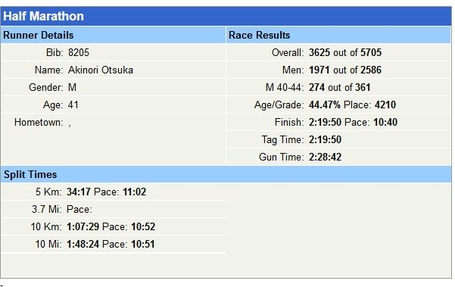