95.9% of Padres fans know Chase Headley by name, according to quiz

Before you read this. Go take this quiz. Then come back -- or not.

Share All sharing options for: 95.9% of Padres fans know Chase Headley by name, according to quiz

You may have thought you were just taking a quiz, when we asked you to try and name all 67 Padres on the Spring Roster. And you were, but the quiz host site Sporcle was collecting data. I hadn't planned this, but I found the results of the quiz to be absolutely fascinating.

By studying which Padres were named most in your answers, aren't we in fact finding the most well known Padres?

These are the most well known Padres players

Chase Headley is far and away the most well known player. It makes you wonder though who left him off their list? When I took the quiz I started at catcher and went around the horn. Do you think some people don't know the team's third basemen? After his standout year in 2012? I can kind of see it though, he doesn't draw a lot of attention to himself when blasting bombs into the seats.

I'm a little surprised by Cabrera being ranked so high. He was one of the guys I absentmindedly left off.

These players are the least known:

Unfortunately I made a typo when creating the quiz. My mind reads "Stange" but my fingers type "Strange" even just now making the table above it happened again. Rest easy the typo has been fixed as of this morning. I'm not sure how much that affected the results.

As for poor Brandon Kloess, well he's relatively new. He was just acquired from the White Sox in November. Even he doesn't know anyone.

"It's interesting putting some names with faces. It's going to be a chore to remember them all," Kloess said. "Coming in, not knowing anyone extensively, I sort of feel like an outsider."

As this post goes to print, 122 of you took the quiz. Here's the full results 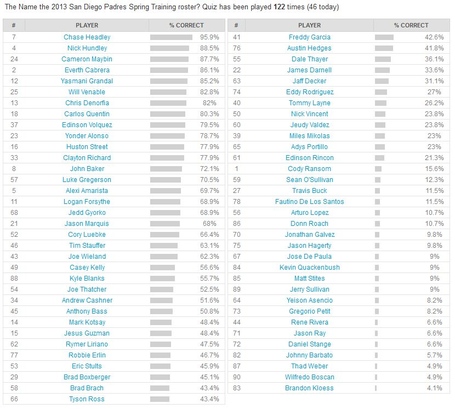 And here's how you guys did overall: 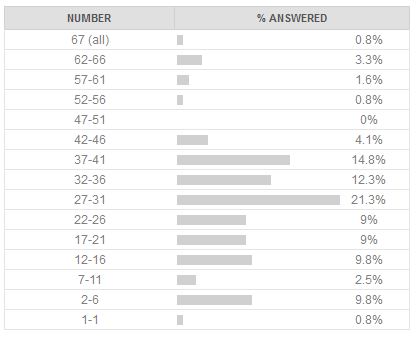