Bip Roberts Wore #3 With The Padres?

Share All sharing options for: Bip Roberts Wore #3 With The Padres?

I was looking through some Bip Roberts cards and spotted something odd on the back of his 1995 Upper Deck issue. 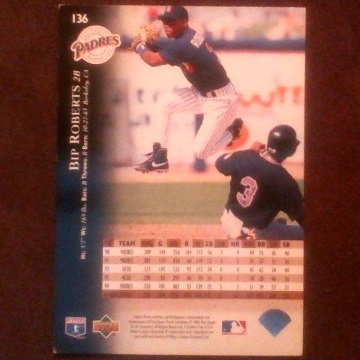 The photograph was clearly taken during Spring Training. Since this is a 1995 Series 1 card, it would have been released before Spring Training '95 and that means one thing.

Alright, now that we know that the picture was taken in Spring Training '94, the rest pretty much puts itself together. The only player who wore 3 for the Padres in the 1994 regular season was Melvin Nieves- and guess what number he wore in 1993 after coming over in the McGriff trade. That's right: 10.

So, it turns out that Bip either traded Nieves something for the number or just pulled rank on him before Opening Day but not soon enough to avoid being pictured wearing 3 and confusing numerous collectors for years.

But not this one.