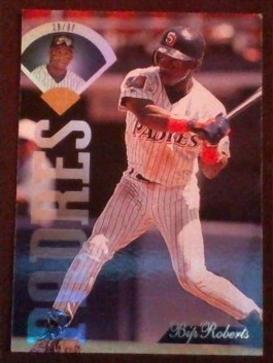 Bip Roberts was the first Padres Rule 5 selection who would go on to be an All-Star. He was named to the National League team in 1992, his first season after being traded to Cincinnati for Randy Myers. Bip has since been joined by two players. Shane Victorino was an NL All-Star with the Phillies in 2009 and 2011; he was chosen by the Padres in the 2002 Rule 5 Draft and was returned to the Dodgers after 36 lackluster games in early 2003. Oops. The other Rule 5 All-Star is of course 2008 pick Everth Cabrera who got to hang out on the National League bench this past July. But more about them after I cover Mike Dunne and all the Rule 5 picks from the '90s.

Well over a decade after his retirement, Bip underwent a resurgence in popularity, becoming a legend in the card collecting community, partially due to a phenomenon known as "Bipping". The practice became so well-known that even Bip himself found out about it. I still haven't Bipped somebody yet but I'm collecting copies of the card shown above until I get 10 of them, and then I know exactly who I'm sending them to.