Share All sharing options for: Padres with Matching First and Last Initials

[Editor's note: Updated May 25, 2014 to add Blaine Boyer and Billy Buckner, and to remove Josh Johnson, who ended up getting injured in spring training and not playing for the Padres after all. -TTG]

Last week Padres organist and Gaslamp Baller B Cres had a great idea, like he tends to do on a regular basis.

We started ping-ponging some names back and forth, and a few others got in on it, before I scoured the master list of everyone who has played for the Padres. I found 50 names that fit the bill, only to find out that I missed one when I double-checked. It was still 51 after a third and fourth check, so I stand by it. With the addition of Josh Johnson and Seth Smith the total grows to 53. After a bit of discussion we concluded that the quiz would be a depressing waste of everyone's time.

@TheThinGwynn @marcusSDTX That quiz would be a sad beast. Everyone would get like 6/50.

With that in mind and not wanting this newly found information to go to waste, here's the list:

Sisterhood of the Traveling Jersey: Playing The Organ For The Padres 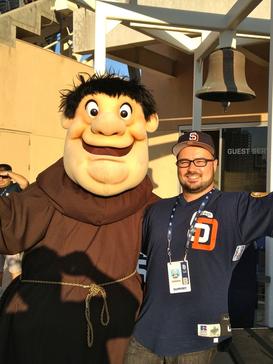 The Sisterhood of the Traveling Jersey is a Gaslamp Ball community project that chronicles the Padres' seasons through the lives of their greatest fans and an old jersey.

I initially titled this post "54 Friars with Alliterative Names" but realized that wasn't quite accurate. There are other players with alliterative names, Ken Caminiti and Jedd Gyorko for example, and Phil Plantier is on this list despite his last name not being Phlantier.