Earlier this afternoon Padres general manager Josh Byrnes fielded questions from Friars fans on Twitter. I'm sad to say that he didn't reply to any of my hard-hitting, in no way inane queries. 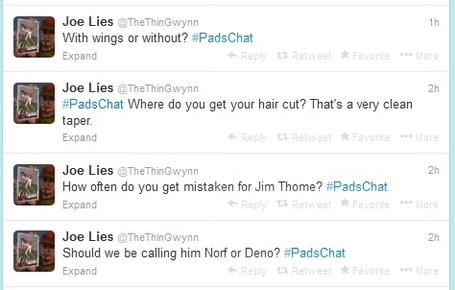 He did, however, provide answers to 15 questions from people who took the whole thing more seriously than I did. The first one regarded a widely-ridiculed quote.

.@singingfriar What I meant was that Smith was a much needed left handed bat, proven against RHP & we've had struggles against RHP #PadsChat

Okay, off to a great start. This is a classic non-answer answer, but did any of us expect any different? That isn't a knock on Byrnes because these sorts of things rarely, if ever, yield any type of actual information. A Twitter Q&A with a general manager -who would be doing his team a disservice by divulging his plans- is really the epitome of "It's the thought that counts."

.@GreenbaumAdam Absolutely. Farm system has been rated very high in recent yrs. W/ trades and homegrown plyrs, we now have a core in place

Well, he answered the first half of the question. They say there are no stupid questions. I don't know if that's true, but I do know there are softball questions that everyone already knows the answer to. Of course he would answer this one.

.@williep1414 Many more moves possible. We've made trades in the past (Kennedy, Ross, Cashner, Quentin, etc.) because of depth. #PadsChat

Another non-answer answer and again I can't blame him. It's not like he can show his hand.

.@Zach_Willamson We like many of our young RHR (Vincent, Boxberger, Quackenbush, Campos, etc.). We also might explore the market. #PadsChat

I'm sensing a pattern here. At this point it is on him. He could be selecting questions that he can give a definitive answer to. Like who his barber is, for example.

.@woedoctor Very encouraged. All progressing well. Luebke and Wieland threw off the mound vs. hitters this fall. #PadsChat

Yawwwwwwwn. Nice to be reminded and reassured, though. I guess.

I'll give him credit for choosing this question. It was a troll question (the asker admitted as much afterward) but Byrnes stepped up and gave two clear answers. He gets extra credit points for taking an opportunity to stand up for Yonder. I don't know why it's become so fashionable to bash Alonso. I'm sure if any of us broke one of our hands we wouldn't be able to do our jobs effectively either.

Now this is where I start feeling sorry for him. Imagine rising to the top of your profession, becoming one of just 30 people in the world with your job, and having to deal with a parade of people who don't know their hole from an ass in the ground yet think they can do your job better than you. Byrnes deserves kudos for not only replying to this garbage, but also for not telling this guy to go know his mother in the biblical sense of the word.

.@bob_bermingham Market can be a bit soft. Many teams have had success rotating back-end pieces on annual basis. #PadsChat

This is more like it. A legit question that many people have been wondering met with a real answer.

.@j_lib_23 He is playing winter ball now. Should be full go for '14. Probably needs some AAA time before ML ready. #PadsChat

.@marcusSDTX Probably depends on opposing pitcher. That is part of the design. We need to match-up against both LHP and RHP. #PadsChat

And another one! At least a few actual, worthy questions got answered. He replied to a couple other people but I feel like I've already chastised enough idiots for asking assy questions so I'm not even going to give the others attention for their stupid questions. That's right. After reading some of the dreck Byrnes had to sift through I have decided that there is such a thing as a stupid question.