In an under-the-radar move, the Padres re-signed left-handed pitcher Jason Lane to another minor league deal. Lane spent the second half of last season with the AAA Tucson Padres but you probably remember him as an outfielder for six seasons from 2002 through 2007. He spent all but three games of his career with the Astros. Those other three games were with the Padres in 2007 when he went hitless in two plate appearances.

Jason Lane Returns To The Padres Organization... As A Pitcher 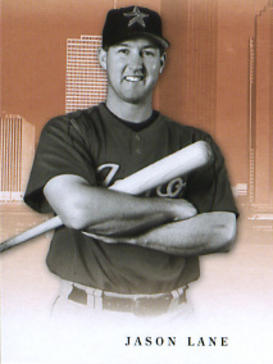 Hey, didn't that guy used to be an outfielder?

I wrote about Lane's transformation and road back to the majors this past July 21, when the Padres signed him away from the independent Sugarland Skeeters and sent him to Tucson. I was pretty excited about it, even though he's a long, long shot, just because I absolutely love this kind of story. I'm human, okay? A month or so later, Corey Brock wrote a much longer, much better actual piece of journalism about Lane, complete with quotes and insights as opposed to some scrawny doofus sitting here typing "Dude that would be awesome!". It's chock-full of quotes from Lane, Brad Ausmus, Anthony Bass, Roy Oswalt, and Randy Smith, and it is definitely worth perusing.

Lane didn't blow everyone way in his 11 games (including six starts) with Tucson last season, but his numbers were impressive when you take into account that he was pitching in the beyond-hitter-friendly Pacific Coast League and that he's still a work in progress. He was 2-2 with a 5.24 ERA and 1.317 WHIP in 46.1 innings. He struck out 33 batters while only walking six. I, for one, am glad that the Padres are giving him another chance. I really hope he can continue his progress and find himself back in the bigs before too long, whether that opportunity comes with the Friars or another team.