Over at the indispensable MLB Trade Rumors, Charlie Wilmoth took a look at where members of their top 50 free agent list have ended up, division by division. As the title of his post states, the AL West and the AL East are dominating the other divisions, boasting the four highest-ranked players on the list; the West was headlined by Seattle signing the top-ranked Robinson Cano and Texas snagging up the third-rated Shin-Soo Choo, while the Yankees have nearly single-handedly put the Arena League East near the top by inking Jacoby Ellsbury, Brian McCann, Hiroki Kuroda, and Carlos Beltran.

Fifth on the list of divisions is the NL West, who have been underspent by only the NL Central. Of the seven top-50-rated players who have signed with an NL West team, the two highest-ranked are both new Padres. Reliever Joaquin Benoit was ranked twenty-sixth, and starter Josh Johnson was rated thirtieth. 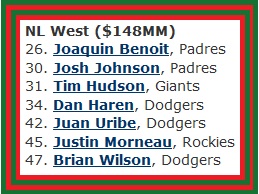 Wilmoth goes on to note that 15 of the top 50 players are still on the table and that no NL team has signed a player in the top dozen. However, he surmises that one NL West team could change that.

The Diamondbacks may be the best bet to be the first NL team to sign a top-ten free agent, since they've been connected to Tanaka, Ervin Santana and Garza.

Masahiro Tanaka, Ervin Santana, and Matt Garza are ranked fifth, sixth, and seventh, respectively. The Padres won't be pursuing any of these pitchers, although it's worth mentioning in passing that Santana follows some Padres fans on Twitter for reasons unbeknownst to me. He started following me about a year ago and I didn't understand why considering I hadn't written, tweeted, or even thought about him. Since then he has started following Padres Public and perhaps others. As for Matt Garza, he doesn't follow me on Twitter, but what he does do is look like current-day Vanilla Ice. 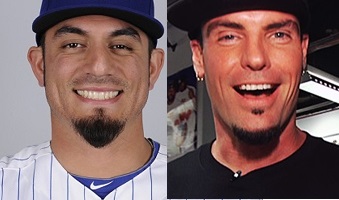 Word to your mother. Peace. I'm out.