Share All sharing options for: Padres Trade Jesus Guzman To The Astros

It's official. The Padres have traded Jesus Guzman. Justin Hunter was warning us. I just didn't think it would happen so soon. Kyle Blanks, beware!

The Houston Astros have agreed to send Ryan Jackson to San Diego in exchange for Guzman. As we know, the Astros have been making moves this offseason and it's pretty evident that they've finally got their big bat in Jesus Guzman. You guys can stop now. You've cornered the market in greatness. Leave some for the rest of us.

In all seriousness, I'm going to miss Jesus Guzman a bit more than I'm sure others will. I have always had a soft spot for the players that aren't the major guys. (The day Chris Denorfia retires as a Padre, I'll cry. Yes. He will retire a Padre. Never traded or released. Because that would make me cry too).

Jesus Guzman spent 3 seasons with the Padres after being granted free agency from the Giants in 2010. He debuted in 2011 for the Padres and had his first home run on June 24th of that year. I'll always remember him fondly as our weapon against the Giants in San Francisco. 5 of his 7 career home runs against the Giants came in their park. And those 7 home runs are nearly one-third of his career total of 23. His bat will be greatly missed in those 18 games per season. I'll also remember him for his Twitter photo of an expensive car and having the sweater game on lock down. 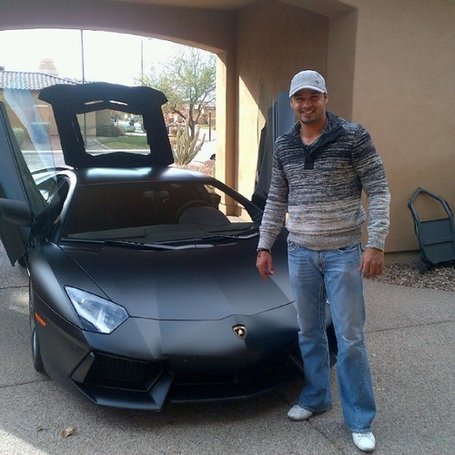 But, Guzman is gone now and Ryan Jackson could soon take his place.

Ryan Jackson began his career with the St. Louis Cardinals after being drafted by them in 2009. In 20 career games in the majors over the last 2 years, his batting stats have been very low. A batting average of .083 might have played a part in being placed on waivers and picked up by the Astros on November 20th of this year. His stats in the minors are far better to look at. Jackson has spent time playing 2B, SS, and 3B, so he may just be a great depth player for right now. According to Corey Brock, the Padres were also trying to acquire Jackson last month but lost out to the Astros.

Skinny on #Padres INF Ryan Jackson. Had options, could open in Triple-A. Offers plus defense at SS. Padres put in a claim, #Astros got him.

Now, the Padres have their man nearly 30 days later.

It's too early to tell whether we will see him in the majors early next year, but having a player with versatility is always a plus. It's like they say, probably, you can never have enough players. Best of luck to Jackson this season. Especially when he's got former teammates on the Padres already.

Ryan Jackson played with Yonder Alonso and Yasmani Grandal in 2008 for U of Miami. #Padres