A kid in 1989 dressed as Tony Gwynn for Halloween... in blackface

Share All sharing options for: A kid in 1989 dressed as Tony Gwynn for Halloween... in blackface

I'm not sure how I missed this tweet from a few days before Halloween:

@bomani_jones can a kid dressed up as his favorite athlete go black face? Tony Gwynn 1989 pic.twitter.com/gAZOfMbzjV 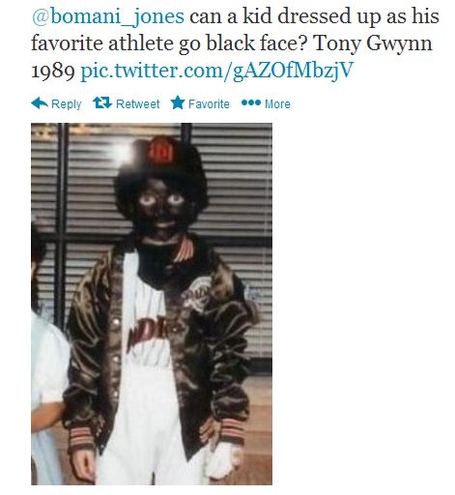 NOTE: David, the San Diegan who tweeted the picture, is not, nor is he related to the kid in the picture.

Bomani Jones is an ESPN2 radio host from Florida.  I'm not familiar with his work.  Without digging through his timeline history it's probably safe to assume he was rightfully offended that some people are ignorant of the inherent racism of blackface.

The topic probably arose because around Halloween of this year Dancing With the Stars pro, Julianne Hough, made news when she dressed as a character from Orange is the New Black by darkening her skin.  It wasn't quite full on blackface, but still it was cringe inducing.  It was very controversial as you can imagine, and although admitting that she did it out of ignorance her excuse was that it was done out of love for the character and the series.

The picture of the kid dressed as Tony Gwynn from 1989 is a little different  First, it's a classic example of blackface, there's no getting around it.  Second it was done by a kid, granted with at least some adult supervision or permission. Without knowing the kid pictured but being roughly the same age, I can almost promise you that he dressed as Gwynn purely out of unadulterated admiration.  If he was anything like the kids I went to school with then he idolized Tony Gwynn.

Third it was done 25 years ago, the prevailing attitude of the time isn't necessarily the same as the modern one.  It may not have been an era when this was quite as common in the entertainment industry but it was a time when a major studio successfully released the movie Soul Man.  I remember going to a Halloween party as a kid in the mid-80s where an adult was dressed in blackface after a failed attempt at KISS makeup.  I'm also pretty sure that costumed adult didn't do it with malicious intent, but would surely be mortified if presented with the picture today.  I didn't know it was wrong at the time anymore than the kid pictured probably did.

@bomani_jones whoa, not my kid! Blame the parents, but the kid is doing it purely out of love.

So can a kid in dress as his favorite athlete go blackface?  Apparently, yes.  Should they?   No, please no. It's shocking to me that at one time a kid would be allowed to wear this costume to school.  It's good that society is getting ever closer to taking a united stand against it.