Friars get their lefty reliever to complete the Anthony Bass trade.

Yesterday, the Padres traded Anthony Bass along with a Player To Be Named Later (PTBNL) or cash in exchange for a Player To Be Named Later. We now know that one of the PTBNLs, the one the Padres receive, is LHP Patrick Schuster. Schuster was the #1 overall selection in today's Rule 5 draft. He was left unprotected by the Diamondbacks, and with seems like good reason. He spent last year repeating High A ball the same league where the Padres have an affiliation with the Lake Elsinore Storm. The league that usually tells us that a prospect is two to three years away from the big leagues. As a Rule 5 selection (even though he was traded) he will have to stay on the 25 man roster for the entire 2014 season or else he must be returned to the Diamonbacks. 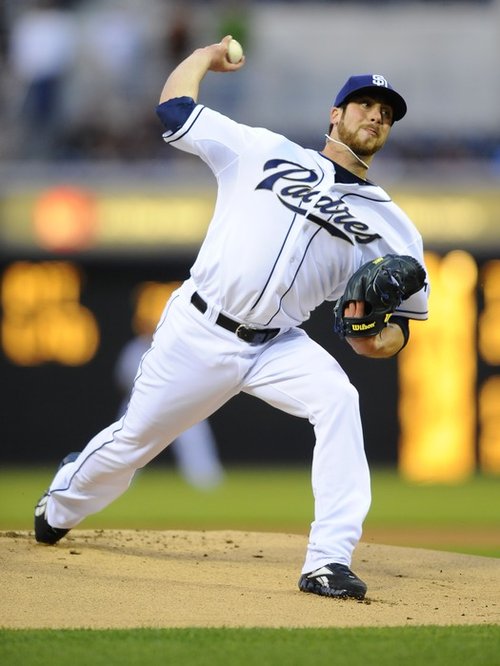 Padres make a deal with Rule 5 draft in mind.

Patrick Schuster is a former thirteenth round pick in 2009, meaning that he was selected by Arizona back when Padres GM Josh Byrnes was their GM. He tallied a 1.83 ERA last year in his repeat of the hitter-friendly California League while whiffing a respectable 9.1 batters per nine. His bugaboo is his walk rate which was a less than ideal 3.7 per 9. Altogether this a bit of a head scratcher. The Padres must think they see something nobody else does in this 23 year old. I certainly don't see it yet. If he does make the roster expect to see him used in a role that you saw Joe Thatcher fill over the past few seasons. He certainly has a chance to make the roster being that there are currently no other left handed relief options and his minor league track record shows that he has some ability to get left handed hitters out. Still, being that he hasn't progressed above A ball his chances of sticking can't get that great so the likely outcome is that the Padres traded Anthony Bass away for a player the Padres will have only a couple of months to evaluate and develop and then probably send back to the Diamondbacks.

The other side of this move is that the Padres appear to have soured on the relief pitching market. Or at least the left handed relievers market This may signal their unwillingness to pay free agent prices for relievers and are not willing to give up what teams are asking in order to acquire proven bullpen depth. Perhaps that is smart, perhaps it is a case of being cheap. Or perhaps it is still early and their futures deals have just moved slowly whereas this move had to be made right now.

UPDATE: Here's a one paragraph writeup from SBNations' minorleaguerball.com on Schuster:

Patrick Schuster, LHP, Diamondbacks: Schuster was originally drafted by Arizona in the 13th round in 2009, from high school in New Port Richey, Florida. The 23 year old lefty was successful in '13, posting a 1.83 ERA with a 45/18 K/BB in 44 innings for High-A Visalia in the California League, with a notably high ground ball ratio. The Astros immediately traded him to the San Diego Padres to complete the Anthony Bass trade from earlier this week. Schuster doesn't have great velocity but he keeps the ball down, has a deceptive delivery, and was adept at fooling A-ball hitters with his breaking stuff. He could fit in the back of the bullpen.