Share All sharing options for: Padres Uniforms: The Definitive Survey

The Padre uniform debate will continue to go on and on until we get this shit figured out.  So that's what I'm going to do today... figure it out.

This is the perfect time to discuss and hear your voices.  The new ownership has pretty much shaped and filled the front office as it sees fit.  I'm sure they also wouldn't mind putting their own stamp on the team.  Last year a little bearded birdie told me that MLB  is requiring the team to use the current uniforms for at least 3 seasons.  That means we could possibly see some new duds on the field come 2015.  It also take a lot of time for the team and MLB to produce uniforms from initial ideas to production; this ain't cafe press! So let's figure out now what our team should be wearing.

I'm probably in the minority here, but I for one would like to see the team maintain a predominantly blue scheme.  However I would like to see accents with shades of brown.  I like the idea of a font that represents our city and our team name "Padres", something Spanish.  So I quickly came up with the following.  It's not 100% what I want, but close.  Blue letters with Mexican flare, outlined in reddish Brown on light brown home jersey's. 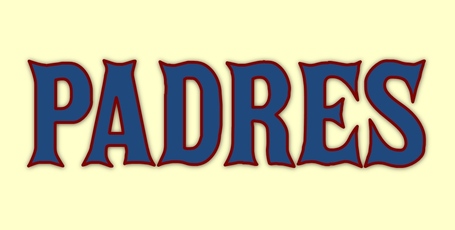 Bring Back the Brown, the grassroots effort to change the Padres uniforms may be on the same page as myself.  But I can't really figure out if they are promoting just Brown with orange or yellow.  Or are they open to the idea of incorporating Blue as well?

I'm not one for throwbacks on a regular basis.  The past is the past.  I love throwback games, reliving those great years.  And because it's not an everyday occurrence is what makes it special.   Jbox however loves the 1978 look.  Insisting that the Brown and Gold is the most identifiable look the Padres have ever had.  And even today no other team wears brown.

So take the time to answer the poll.  I know there are a lot of choices, but that's what you get when a team has no lasting traditions.  Add any ideas and or images to the comments.