Today is Dan Briggs's sixty-first birthday. Briggs played in 104 games for the 1979 Padres, and in parts of six other seasons with four other teams. The left-handed Briggs played first base and all three outfield positions during his year in San Diego, but was used mostly as a pinch-hitter.

The Life and Death of Craig Stimac 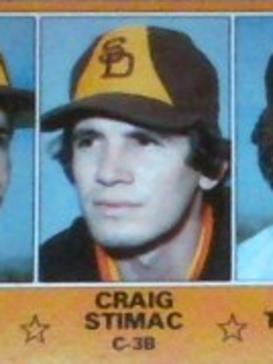 Craig Stimac was also born on this date. Sadly, he's no longer around to celebrate.

This is the part where I would usually hammer out a fistful of paragraphs about his career before, during, and after his time with the Padres, but as I was researching him I found a great post doing just that. It's from a 1980 Topps set blog, and the author really covered all the bases. It's a good read, but if you want the "tl;dr" summary, here it is: He was great in the minors, made Mario Mendoza look like Ted Williams in the majors, and wasn't much better in Japan.

That post also noted that Briggs was the head baseball coach at Denison University the entirety of the 1990s. It still bugs me every time I see that job title. Why aren't they called managers in college? Anyway, after that, he opened a baseball school in Worthington, Ohio. I found a blog post written by someone who was under the tutelage of Briggs. To say it didn't paint him in a positive light would be an understatement.

One thing we remember about Briggs, actually a couple things. One, he was a loose cannon. Very squirrely. At any moment something would set him off, he’d go apeshit, and he’d disappear for 20 minutes of the lesson. He’d return and act like nothing ever happened.

One time at his baseball camp a fellow camper was walking to his spot in the outfield. The kid showed up in Airwalks. He was there because his parents made him be. He wasn’t enjoying it. Mr. Briggs had to know this. But when Danny boy saw this guy trotting to his spot (we were probably 13 or 14 at the time) Dan yelled in a furious but quick voice "Jesus Christ! HEY! YOU! Break a fucking trot!" and was incensed in the dugout during the entire scrimmage because of it.

Well, then. Here I was, trying to wish the guy a happy birthday, and now I don't feel like wishing him a happy anything. Ehh, maybe he's mellowed with age. Or maybe that account was just one person's perception of a couple of isolated incidents. Briggs could have been going through some personal stuff at the time, let it bleed into his professional life at a time of weakness, and now really regrets how he dealt with things. Who knows? Not me.