Homer Bush never played a single regular season game for the Padres but like Harold Reynolds, Mike Scioscia, Alex Cole, Mark Prior, and others, he did manage to find his way onto some baseball cards as a Friar. Selected by San Diego in the seventh round of the 1991 draft, he stuck around the organization until 1997 without getting as much as a cup of coffee in the bigs. He debuted later that year after going to the Yankees in the first of two blockbuster trades he would be involved in.

Fifty-five games and nearly two years after going to New York in the Hideki Irabu trade, Bush moved north of the border with future Friar David Wells and Aussie Graeme Lloyd in exchange for bat-throwing psychopath Roger Clemens. Homer won the starting second base job for the Jays that year by beating out free agent acquisition Joey Cora, who retired before the season began. 1999 would be Bush's only year as a starter, and in fact his only season playing in as many as half of his team's games.

Bush remained with the Blue Jays in a platoon role and was consistently abysmal with the bat until he was released in May of 2002. He latched on with the then-Florida Marlins shortly thereafter and somehow managed to do even worse in 40 games there. Homer returned to from whence he came, signing with the Padres after the season, but was released by the club due to a hip injury before spring training for the 2003 season began. He missed the entirety of that year and returned to the Yankees organization for the 2004 season, where he got into the final nine games of his career. Bush was hitless in seven at-bats and that was all she wrote.

Since his playing days ended, Bush went on to a second career as a financial advisor. He was featured in the ESPN 30-For-30 film "Broke", discussing how players go, well, broke. He was displeased with the way he was portrayed, feeling that the movie gave the impression that he was one of the broke ones. In addition to his main gig, Bush finds time to coach kids at Blue Jays clinics.

Today is Homer Bush's forty-first birthday. He's pictured here on his 1996 Bowman card, one of just a handful that feature him as a Friar from his first non-stint. 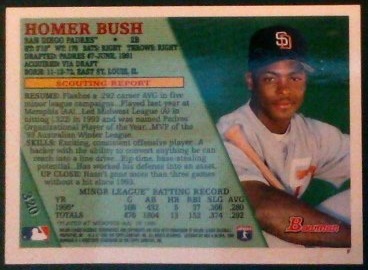