Voting is open for the 2013 Minor League Baseball Yearly Awards.

Our minor leagues had a lot to be proud of this season. Now MiLB is giving fans a chance to help honor them with the 2013 MiLBY Awards. Voting, which can be done by clicking here, ends on October 22nd and you can vote multiple times per day.

Have you cast your #MiLBYs votes today? Top plays, performers and performances across the Minors. Vote now! http://t.co/8z76olB3Bh

Here are the five categories (out of 13 total) our minor league affiliates/players have been nominated for:

Limonta's first and only postseason home run, a grand slam in game 5 of the Texas League Finals, helped propel the San Antonio Missions to a win and a championship title.

Wisler, the Padres' fifth-ranked prospect, started the season in Lake Elsinore, where he pitched six games for the Storm before being promoted to Double-A San Antonio. During the regular season he went 8-5 with a 3.00 ERA in 20 starts for the Missions, collecting 103 strikeouts while pitching a total of 105 innings and keeping opponents to a .223 average. He was fantastic in the playoffs, where he started both the division and championship series openers, allowing only one run on five hits in 13 innings. He additionally pitched in relief for the first time in his career in game 5 of the championship finals, tossing three scoreless innings without allowing a hit.

Quackenbush split time in double-A and triple-A this season. He racked up 17 saves and 10 wins on the year while pitching a total of 65 innings in 57 games (29 for the Missions and 28 for the Padres) and collecting 84 strikeouts.

The Missions, as a team, finished the year atop the Texas League's pitching leaderboard with a 3.19 ERA and the hitting leaderboard with a .256 average. They had the second best record in the league during the regular season and topped off the year with the franchise's second Championship title in three years and 13th title overall.

On June 13th, the TinCaps sported specially designed jerseys for Social Media Night at Parkview Field. The jerseys featured the handles of over 6,200 of the team's Twitter followers, including our very own @gaslampball and many of you Gaslamp Ballers. Fort Wayne previewed the jerseys through their social media sites prior to Social Media Night and it was picked up by ESPN, who tweeted about them to their millions of followers. The TinCaps wore the jerseys during their game against the Lake County Captains and fans in attendance were given chances to win these jerseys through various social media platforms. 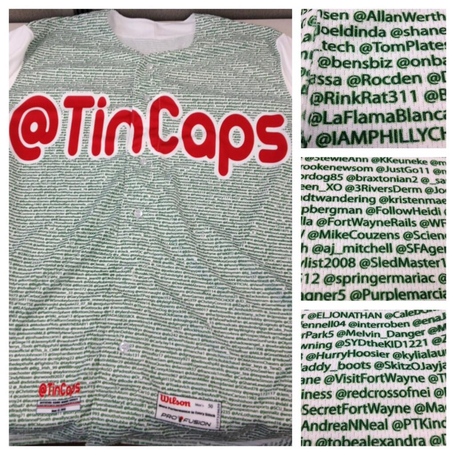