Share All sharing options for: Joey Cora Being Considered for Mariners' Managerial Job

Former Friar... there, I said it. Joey Cora was drafted by and played for the Padres so that gives me an excuse to talk about him whenever I see fit. But this isn't just some random evergreen Joey Cora baseball card post. No siree, Bob. My man is in the news these days because the Mariners are considering him for their vacant managerial position.

YOU HAVE NO IDEA HOW STOKED I AM ABOUT THAT.

Awmagaw, Joey Cora managing the Mariners would make more sense than anything ever. I know I've been a big proponent of the fictional scenario of the Padres shitcanning Bud Black and hiring Joey, but this is a thing that could actually happen and I'm all about it. Besides, to be honest, he's most identified as a Mariner. That's where he had his All-Star season, where he set an AL record for switch-hitters with a 24-game hitting streak, and of course where he shed some of the most famous tears in baseball history.

Since Joey retired after the 1998 season, he managed a bit in the minors for the Mets and went on to be a right-hand-man to his former double play partner Ozzie Guillen. Cora served as Guillen's bench coach in Chicago and Miami. He's been out of the dugout this past season but has showed up on MLB Network in some balla-ass, Steve Harvey-lookin' suits. Dude dresses super-dapper, on the real. He's a lot of fun to listen to; his enthusiasm for the game is apparent.

But anyway, what would he look like as the Mariners manager? I'm glad you asked. Since the Mariners still wear the same unis they rocked back in the mid-90's, I didn't even have to photoshop a thing. Just squint a little so he looks 15 to 18 years older. 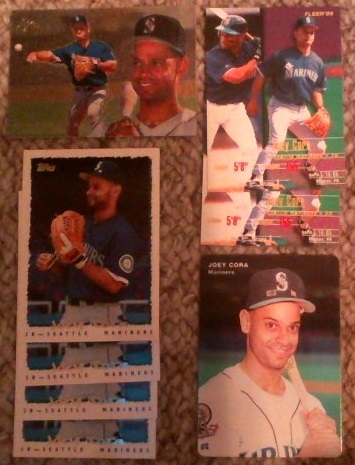 Those '95 Fleer cards are so out there. They had a unique concept where they used a different design for each of the six divisions. Cora also showed up in the set earlier on as a White Socker, but Chicago isn't considering him for a job so I don't have an excuse to show you those. 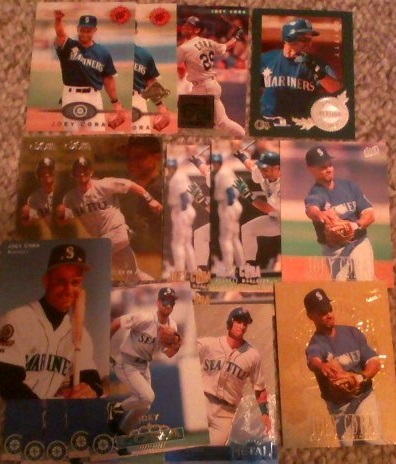 That Stadium Club card at the top left is one of my favorite Joey Cora cards of all time. Fist in the air in the land of hypocrisy! Note that one is the "World Series" parallel. Speaking of parallels, that Gold Medallion version of that Fleer Ultra issue is a lot less classy in person than you think it would be. 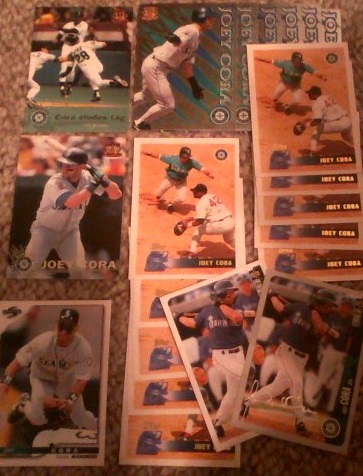 The top-left card and the one beneath it are from a regional release set. The pair at the bottom-right corner are his Upper Deck Collector's Choice base card and Silver Signature parallel. 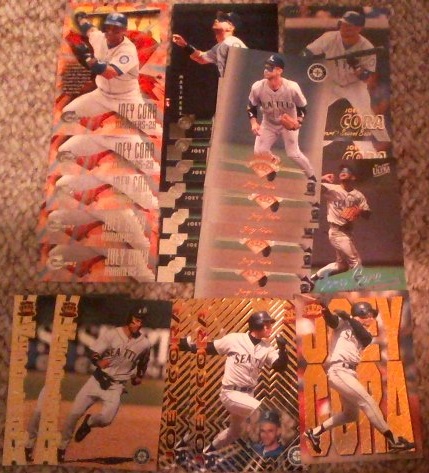 Have you noticed that he's always pictured as a left-handed hitter? He's a switchy, you know. 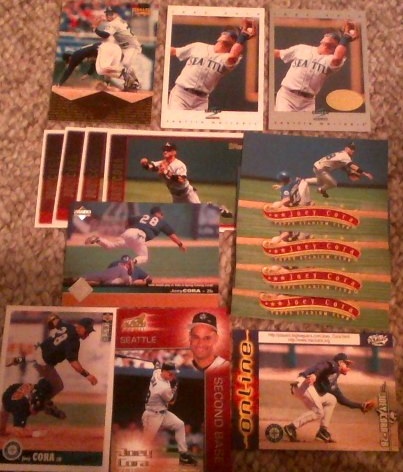 Seriously, have you hired him yet, Jack Z-word? 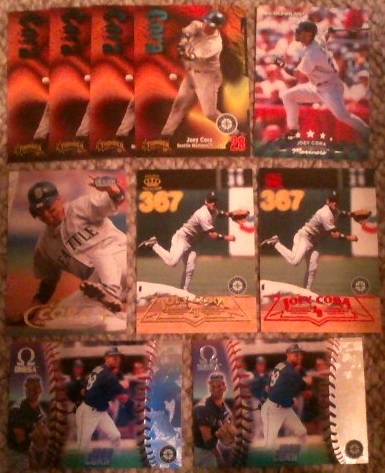 The only interesting one of this batch is the Red Threatt parallel on the right side of the middle row. 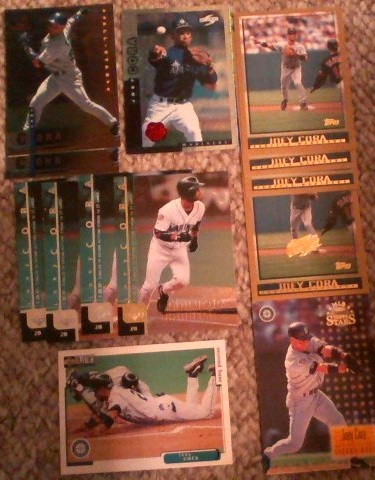 This bunch has a few parallels. Note the red Artist Proof stamp and refractor effect on the top-row Score card. The right-most of the Upper Decks in the middle row is a fairly rare S-FX issue. The bottom Topps card right next to it has the 1998 Tampa Bay Devil Rays Inaugural Season gold stamp. These were released in select sets. I don't have the Diamondbacks Inaugural parallel yet but I have both the Rockies and Marlins ones from back when he was White Socking it in '93. 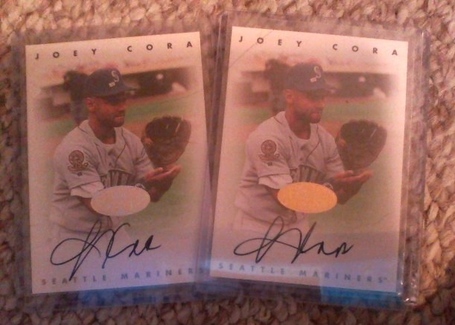 I love these. Joey retired right as the autograph and relics game started kicking up. He was on one authorized autograph issue. There were 3,500 of each base card, 1,000 of the silver ones, and 500 of the gold ones. Check out how tired he was by the time he signed the second one.

If he does get the job, that opens up new possibilities for my collection as Topps tends to make cards of managers. But never mind my selfishness, he genuinely deserves his shot.