How to Have a Happy Gaslamp-Ball-oween: Part 1

Carve a fun/funny/spooky pumpkin to display your fanhood (I said FANhood, with an 'F').

Share All sharing options for: How to Have a Happy Gaslamp-Ball-oween: Part 1

Halloween is just a few days away. Here is one way for you to have some Gaslamp-Ball-oween fun.

As many of you know, I'm something of a pumpkin-carving enthusiast. I always try to make one (or four) Padres and/or San Diego themed jack-o-lantern(s) every year.

You can see my past designs here, here, here, and here. That last one from 2012 was definitely my most ambitious and it won me the Padres Pumpkin contest, which was p cool. It also helped that I was one of like four entries into the contest and all the other ones were just the basic interlocking SD logo, but I still consider it an accomplishment.

Now I want to see all of YOUR pumpkins. Whether it's an intricate carving that took four hours or something more simple, share your beautiful Padres pumpkin in the comments.

Need some ideas? Here are a few that I've come up with for you guys.

SAN DIEGO PADRES PUMPKIN. The Padres are doing another Instagram pumpkin contest like the one I won last year, and you can win a Padres prize pack. They have stencils you can use here to carve either the interlocking SD logo or the "Padres" script. Get creative, though. More ideas:

MINOR LEAGUE AFFILIATES PUMPKIN. I think this is what I'm going to do this year. Our minor league teams have some awesome mascots/logos to choose from, ranging from easy to complicated.

And last but not least... 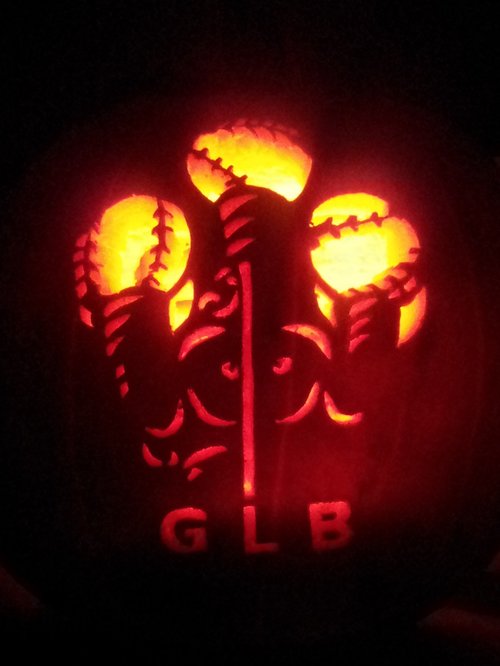 GASLAMP BALL PUMPKIN. Last September, the entire SBNation platform upgraded to SBN United. Along with the switch to SBNU came a new, modernized version of our blog's old logo. Last Halloween, I took the liberty of making a stencil of that logo and carving it into a badass jack-o-lantern. Other ideas for GLB-themed pumpkins:

Now get carving and don't forget to share your pumpkins in the comments as FANSHOTS so we can put them on the front page! Don't know how to post a fanshot? We've got a tutorial for you riiiight here.