Today is Bip Roberts's fiftieth birthday. I originally planned to showcase 50 of his baseball cards but dismissed that idea after sleeping most of the day and being generally lazy otherwise. I sliced the number down to a more reasonable 10 since that's the number he wore for the Padres. Well, he did wear 2 as a rookie in 1986 and 3 during spring training of 1994, but he's best known for wearing 10. With the reasoning out of the way, I'll stop wasting your time and get right to the cards. 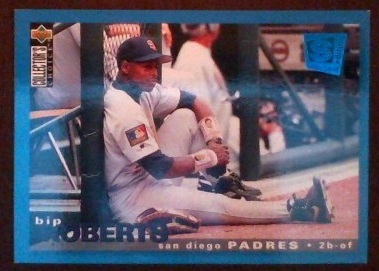 This has always been one of my favorite Bip cards. It's a good example of mid-90's Upper Deck photography in that it captures its subject off the field. Spoiler alert: this is not the last card on this list that will fit that description. The photo was taken during the 1994 season, which you can tell by the MLB 125th Anniversary patch on his sleeve. Also, it's always a good idea to have a picture of your face on your wristbands just in case there's a laundry mix-up or something. It's a matter of practicality, you guys. 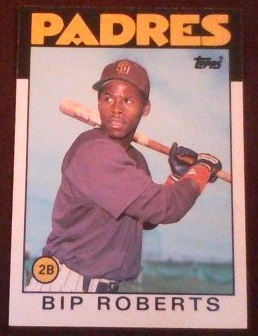 Here's a young Bip on his first Topps card. It's from 1986, his rookie season after he came to the Padres from the Pirates organization in the 1985 Rule 5 Draft. Check out how far he's choking up! That reminds me of a Gene Richards card just like that. 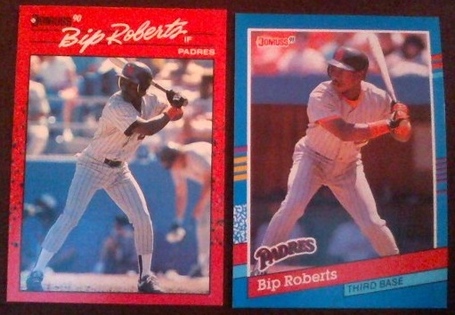 I grouped these two cards together to point out a couple small changes Bip made from one year to the next. Firstly, on the 1990 card he is shown wearing a brown undershirt. I assume this photograph was taken in 1989. In the 1991 card, featuring a photograph which would logically be from 1990, he is wearing an orange undershirt. I prefer that look myself. His wristbands are orange both years and don't yet have his face on them. The bigger difference that I noticed, though, was his batting helmets. At some point he switched over from one double-flap helmet to two separate helmets for each side of the plate. What's really strange to me is that he went back to the double-flap in 1992 with the Reds. 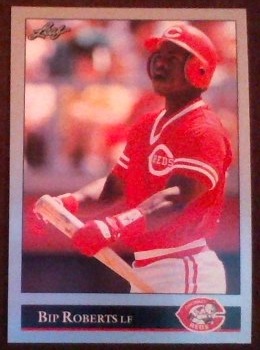 See? I have two theories on this. One is that the photograph was taken early in spring training and his helmets weren't ordered yet since he was new to the team. The other theory is that Marge Schott was so cheap that she refused to pay for more than one helmet per player. 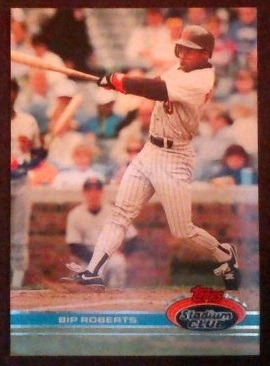 Bip's entry in the inaugural Stadium Club set features a nice picture on the front of him driving the ball. The borderless design was a big deal at the time, but the backs were even more offbeat. 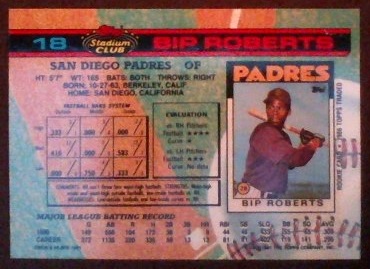 Hey, that looks familiar! Instead of a current photo of the player featured, the first couple Stadium Club sets opted to show the player's Topps rookie card. Another unique feature was the heat chart and scouting report in addition to the stat line. 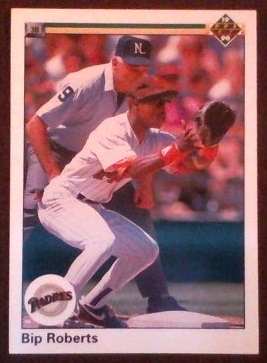 I've always been fond of this card. That's a pretty nice photo on the front but it's even better after you see the one on the back. 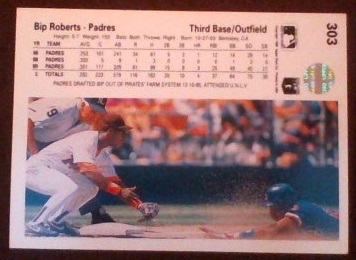 I love it because it appears this picture was taken literally one second after the one on the front. It tells a story, and it's always a good story when a Cubs baserunner is out by a mile. 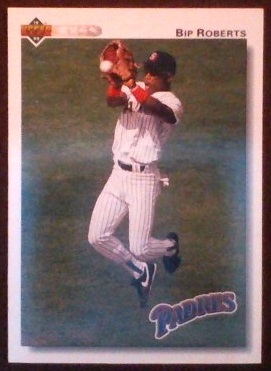 Another classic Bip card by Upper Deck. This one shows him snaring what I've always assumed was a line drive on the front and also features another good shot on the back. 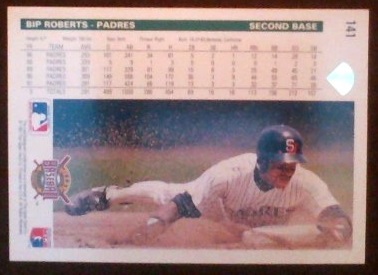 Safe! So many of Bip's cards show him sliding. If you ask me, that's always a good look on a baseball card. 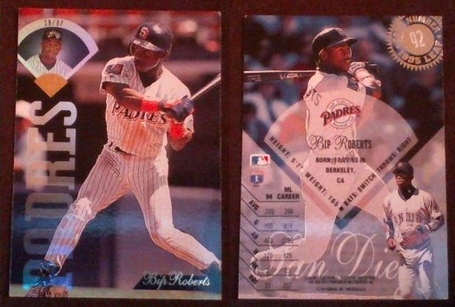 I included this card because it features no less that four photos of Bip Roberts. Even better, each of them show him doing something different. He's batting lefty and sitting in the dugout on the front, and in the field and batting right-handed on the back. 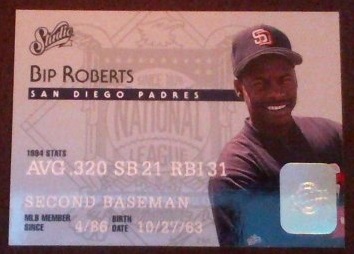 Studio was always one of my favorite lines back in the '90s because they did their own thing. They used posed photos each year and always followed a theme. 1995's theme was this credit card look. 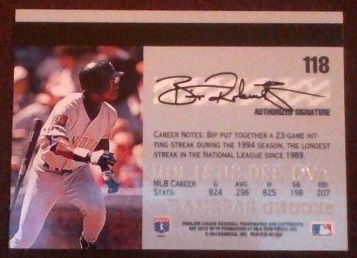 The theme carried over to the backs, with the black strip and signature. Also, you can see the embossed stats from the front. This base card is just plain cardstock but some of the parallels were actual plastic. 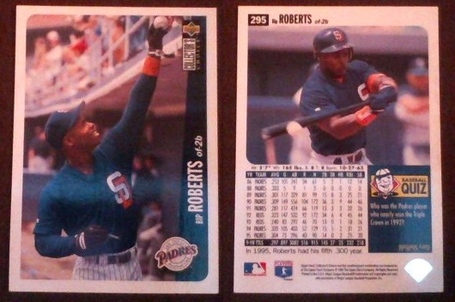 This is the card that I was alluding to that you'd already forgotten about. It seemed like the perfect bookend to conclude this post.