The National Baseball Hall of Fame in Cooperstown is the home of the A. Bartlett Giamatti Research Center, the world's largest baseball library collection. But the second largest is now located right here in San Diego. Last month, the new San Diego Central Library opened downtown, just a few blocks away from Petco Park. The library houses the Sullivan Family Baseball Research Center, which features the SABR (Society for American Baseball Research) Collection - a baseball lover's dream consisting of over 3,000 publications and 300 microfilm reels.

The Baseball Research Center opened in 2001 with a donation of publications from the San Diego Ted Williams Chapter of SABR. According to SABR's Jacob Pomrenke:

In 1998, the Ted Williams Chapter partnered with the Central Library to open the research center and the initial acquisition was made in 2001. It included a complete set of The Sporting News, Sporting Life, University of Notre Dame baseball guides and SABR's annual publications, The Baseball Research Journal and The National Pastime.

Now the Sullivan Family Baseball Research Center, named after longtime library expansion supporters Katie and Dan Sullivan, makes its home on the eighth floor of the new San Diego Central Library. The SABR Collection includes books and publications on baseball from throughout the ages, dating back to the 1700s all the way to present day, as well as the aforementioned microfilm reels, which are available in just one other location - the Hall of Fame Library in Cooperstown.

On September 28th, San Diegans were invited to a pre-opening celebration and street festival to commemmorate the library dedication and get a sneak peek of certain areas of the new library. The library then opened to the public two days later on the 30th.

I finally got a chance to visit the library for the first time on Friday and it was everything I imagined. The entire building is magnificent. Upon entering the library from the underground parking garage, there are screens that show a variety of moving images. I happened to pass by when it was showing pictures of Petco Park and the surrounding areas. 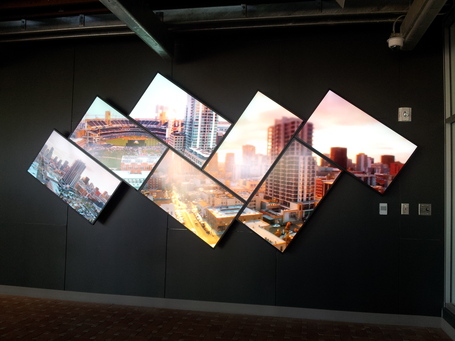 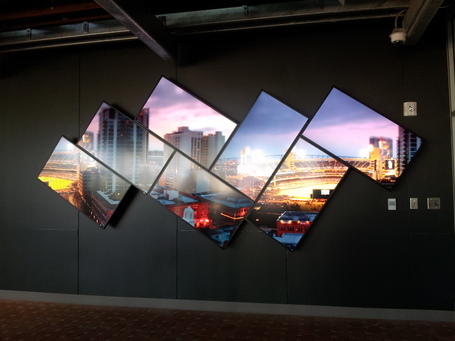 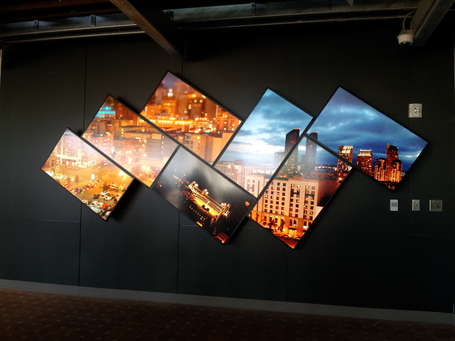 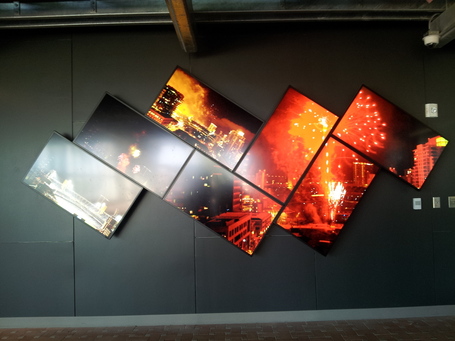 In the main lobby on the first floor, you can look down and see the donor bricks, which people bought in the later stages of construction to help fund the new library. 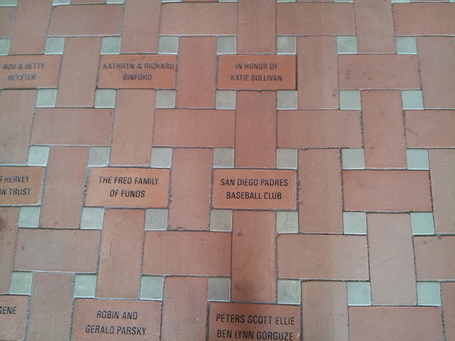 I also learned later that on the first floor of the library, located at the customer service desk in the main lobby, is the San Diego Padres Home Plate Book Return, the purpose of which is to encourage people to bring their books back "home."

The rest of the library is really spectacular and I can see myself spending hours on end exploring all nine floors. But my favorite part, by far, is the eighth floor Reading Room and the Baseball Research Center's SABR Collection. It really is an endless supply of baseball knowledge and a sanctuary for any baseball fan. 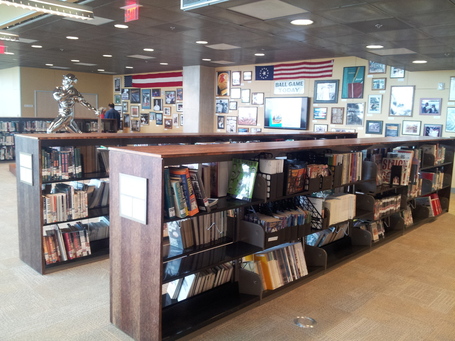 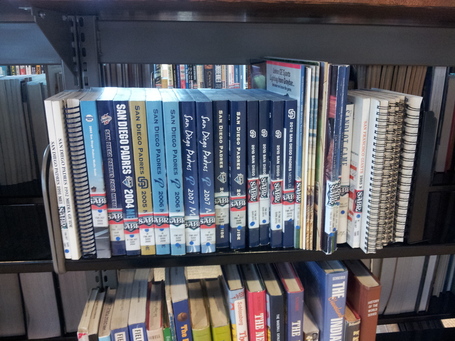 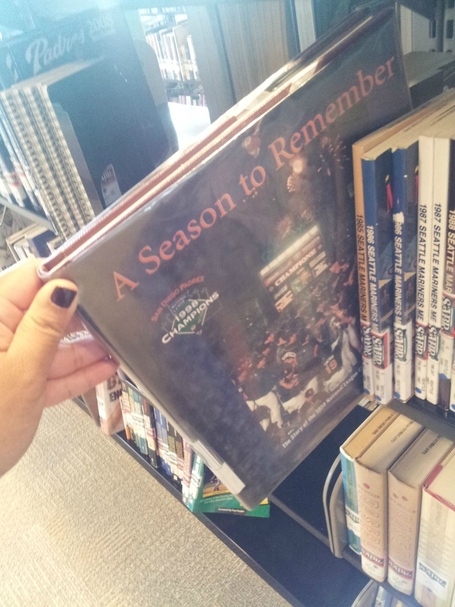 I'd like to point out the brown chairs and yellow tables in the middle of the room. 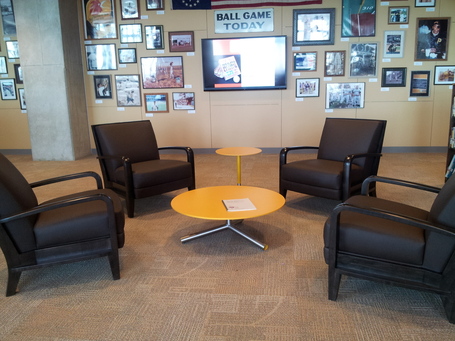 Aside from the books, the Research Center is also home to a Fantography exhibit, which displays photographs taken by amateur photographers, including local San Diegans and other baseball fans, throughout history. 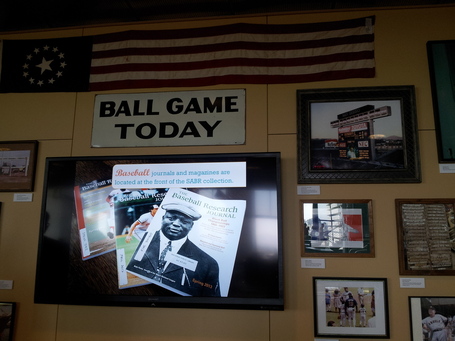 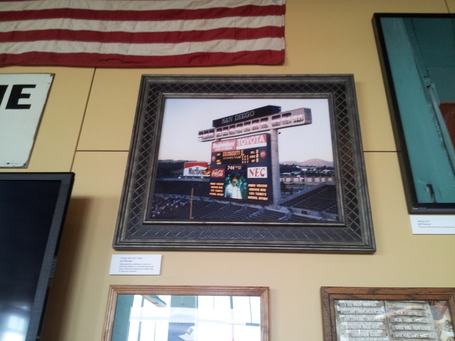 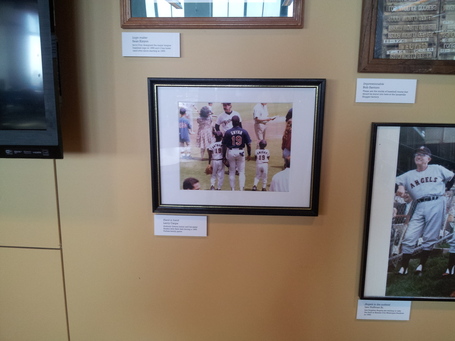 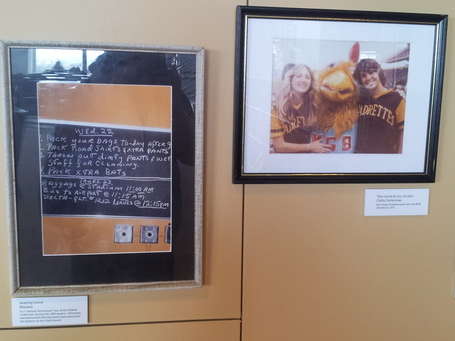 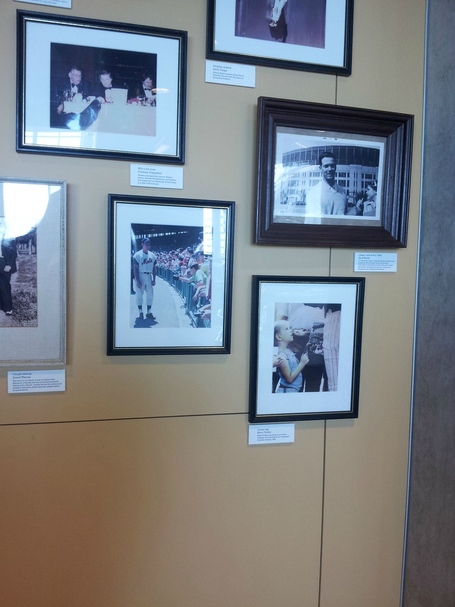 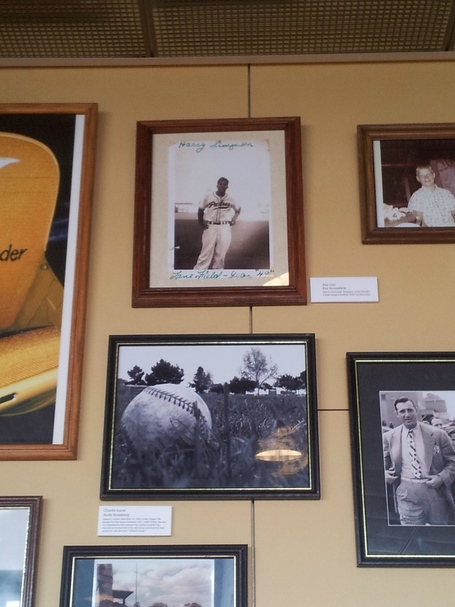 I love the concept of "fantography" and the idea of using fan-made content rather than professional photos to put on display. I think another great contribution would be a certain jersey that has brought happiness and luck to Padres fans all over the world. That's right - Gaslamp Ball's very own Traveling Jersey. How cool would it be if upon its retirement from traveling the world with some of the greatest baseball fans in the universe, the jersey made its home amidst the rest of the SABR Collection? The jersey's chronicles could be shared with San Diego and the rest of the library's visitors as a testament to the unifying power of baseball worldwide. Someone please make this happen.