I recently saw an auction for a full 28 card Padres team set of 1996 Mother's Cookies cards and was practically obligated to get them. The '96 season is one worth remembering and I've always been a fan of the understated Mother's designs.

Mother's Cookies sporadically produced a number of licensed team sets for a handful of west coast teams in the '80s and '90s. They were distributed both as singles packaged with baked goods and as sets on ballpark giveaway days. You may recall the fanpost kevintheoman did about the '98 set. The set I got was a giveaway; it even arrived in its original package. 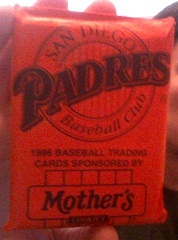 The pack is just an orange paper envelope but has managed to survive all this time. As is so often the case, the back was where it got interesting. 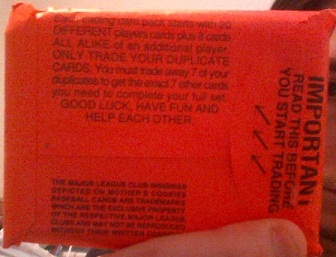 Huh. That's a pretty good idea to get kids into trading cards. Of course it kind of sucks for me because I was expecting the full set but life could be worse. Whoever got these managed to trade some of their duplicates because now there are 23 of the 28 card set along with five dupes. The ones I'm missing are #22- Chris Gwynn, #23- Luis Lopez, #24- Tim Worrell, #27- Bryce Florie, and #28- the coaches card. I imagine I'll wind up overpaying for them as singles so I can frame the set. But enough blather; on to the cards!

Ah, the classic Gwynn smile. And the also nice but not so classic Joyner smile.

I like that everybody is smiling on these. In about any other set I'd prefer to see ballplayers doing their best mean muggin' but come on, cookies and happiness go together.

I just can't stop looking at that picture of Fernando. He looks more like somebody's grandmother than usual. Oh, come on, Brian Johnson. I appreciate it but it really wasn't that funny.

Jody Reed appears to be one of the first to jump on the Caminiti goatee bandwagon. I wonder if Bob Tewksbury ever grew one. Google Images isn't showing one so I guess he concluded the same thing that I have: that he would look weird with one. On a completely unrelated note, R.I.P. Andujar Cedeno.

Sean Bergman is one of three former Padres pitchers who attended high school at Joliet Catholic Academy in Joliet, Illinois. The other two are Kevin Cameron and the great Mud Grant. I'm not sure where Marc Newfield or Craig Shipley went to high school and you don't care either anyway.

Like Bergman, Bobby Livingstone and Doug Bochtler also spent time with the Tigers. I don't know what became of the guy in the middle.

Archi! It seems like everybody loved him back then. It's not the most flattering shot of him but in a weird way the squinting almost seems to work in his favor. "He's so scrappy he can barely see the ball!" 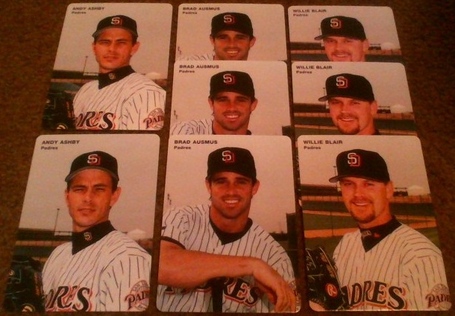 Here are the last three and their duplicates. Andy Ashby is the only guy in the set who looks less than thrilled to be there, while Brad Ausmus seems to be reveling in the fact that he found out ladies love scruff years before anyone else caught on. As for Willie Blair, he's just happy to be out of Kentucky.