A look at the Petco Park Fence Construction

Share All sharing options for: A look at the Petco Park Fence Construction

I don't know anything about construction, but from a layman's point of view, it appears that fence construction is moving rather slowly at Petco Park. Every time I check in it looks exactly the same. Lots of bare concrete, vehicles parked haphazardly and dirt... for 3 months. Opening day is coming quickly, will it be finished? Probably yes.

The Padres President tweeted out an artist's rendering of what the changes will look like. I took some pictures last night through temporary fencing to see what was really going on. You can compare and contrast. 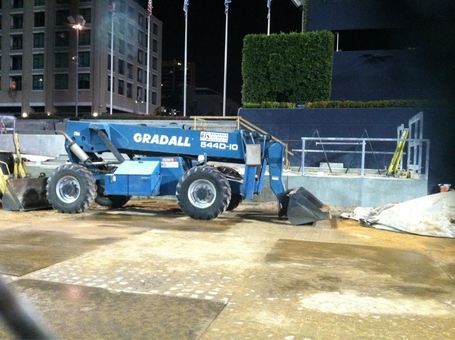 I've read about the changes and looked at these renderings but I still can't quite picture it in my head for some reason. I think it's because I don't really want to get it until I see it in person. I think I want to be surprised.

Padres to Move in Fences at Petco Park