Yesterday Friarhood wrote about an autographed picture of Adrian Gonzalez he saw online. Under his signature, Adrian, who claims he grew up a Padres fan, wrote "I bleed Dodger blue".

I gave him the benefit of the doubt thinking to myself, "Maybe he got a blood transfusion from Tommy Lasorda." Then again he was never much of a Padres fan in the first place. He's just a mercenary who'll do or say anything to try an endear himself to his current team and fan base for money.

Friarhood got to the bottom of the controversial statement in today's update:

Adrian Gonzalez autographed approximately 200 items with the "I bleed Dodger blue" tagline this Saturday, during a paid appearance at a baseball show in Orange County. This was a paid signing through American Icon Autographs. After speaking with Sean Jacoby of AIA he told me, he asked Adrian before the signing to use the tagline, after a brief pause Gonzalez agreed. AIA states that the signing fee was donated to charity.

AIA was behind the Latos "I hate SF!" signed baseball too. That statement got Latos into some hot water with his own team, not to mention the entire city of San Francisco. They're a bunch of sh_t starters over there at AIA apparently. I wonder if they care at all about their athlete's reputation or just want to sell stuff? That's a rhetorical question.

If that worm Adrian doesn't grow a backbone next time he's signing I'm going to try to pressure him to write this. 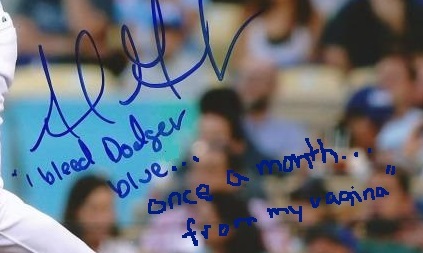