Tons of facebook drama with Harry. Too much stuff to put into a fanshot, so I'm making a fanpost. I'm trying to make it readable, but it's probably best to go over to facebook and read for yourself. 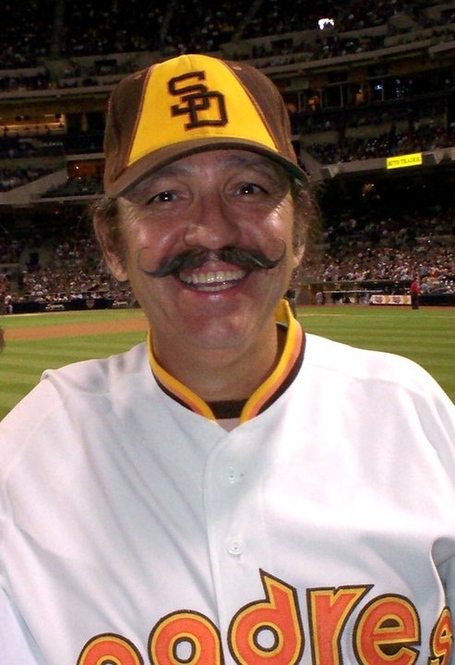 By Tricia - On Wednesday Harry went to the Park 2 hours early as usual. He was having his ticket scanned when a female security guard poked him and asked what is that suspicious package? a cell phone? Harry lifted lifted his shirt and showed her and said yes and continued on into the game. He went over to the sandpit area to watch batting practice when 2 security guards came up to him and asked him "What happened at the gate?" he told them and showed them his cell phone holder. Then 2 more security guards came over and went over the same procedure (Now this is getting to be very redundant over something that was taken care of at the gate). Then the head of security (Jim) came of and said Harry you know I have known you for over 20 years. The Team was watching and Luke Gregerson asked what is going on.
They handcuffed Harry and duck walked him to a holding cell and held him there for over an hour. They manhandled him and threw him against the cage. His shoulders still hurt. The police came by and said let him go. So they group walked Harry to the exit, pushing and poking him. Harry says he doesn't love any sports he loves the PADRES. But you may never see him at a game again after the way he was treated. Beware don't bring your cell phone to the game.

The following was within that post's comments. Both are probably posted by "Tricia"

Unbelievable isn't it. I guess they didn't have anything else to do so they pick on Harry.

By Tricia - Call the the Padres and complain and have they apologize so that Harry will go back to to the games. Right now he is saying he won't go next year either.

Tricia got the day wrong, it was Tuesday.

I guess I'd better explain what happened. On Tuesday as I was getting my ticket scanned at the turn style a woman came up from behind me and startled me by accusing me of carrying something 'suspicious' under my jersey. I said "what my cell phone"? I then lifted my shirt and showed her.

As is my way I loudly complained as I complain about everything. I thought that the whole thing was done so I then went down to the sandpit to watch BP.

Then two big guards came up and wanted to talk about what happened at the gate. I told them the woman want to know what was under my shirt and I showed her my cell phone. Apparently that wasn't enough of an answer and kept bugging me about it. I then asked to be left alone and moved onto the sand.

They then called for the head honcho of the security team who came down to the sandpit and asked me what happened at the gate. I told him the woman wanted to see the ' suspicious' thing under my shirt and I showed her my cell phone. Apparently that still wasn't good enough and he kept pressing me for 'what else'. By this time I had enough of what I didn't see as a problem and asked him 'would you please leave me alone'?.

At this point the head guy decided to show me his power and authority and ordered me to leave the park. I was ticked off by now and said "fine but I’m going to go around to the Padres front office and complain about this. I then started to walk toward the exit, I was leaving the park.

That’s when the head guy decided that I was some kind of danger to them and he was going to show me what real power was. They started grabbing me, demanding my ticket for the day, pulling at me, shoving me and finally slammed me against the wall of the pitchers eye. They twisted my left arm till it felt like they were going to break it while putting me in handcuffs. They then goose stepped me all the way to the security office and left me sitting there in pain with the handcuffs on for about an hour.

I did nothing wrong! AT NO TIME DID I FIGHT WITH THEM! I didn’t start cursing at them until AFTER they started grabbing and hurting me, anybody would get mad when someone is hurting them. In 50 years of going Padres games when have I caused a problem? What did I do that would warrant being treated that way? Why did the security team keep pursuing me about this and escalating what should have been a none issue?

It’s been 2 days and I’m still hurting in the shoulder and neck area. I’m a 60 year old disabled veteran! My body doesn’t bend like that if I wanted it to let alone someone forcing my arms around like that.

No, I am not going back to another Padres games until the Padres do something about this. They could start with a written apology from the security team that attacked me and the assurance that in the future they’ll leave me alone.

Tom Garfinkel responded to this post within the comments section

Harry, Please accept my apology that this happened. I will look into the incident with Elite security and our folks internally. In the interim, please be my guest at tonight's game. I have some special seats for you (4) that you can pick up at the office front desk. Let me know! Best, Tom

Additionally one of the page's admins had made these comments

I am at the game with Karen right now and we miss you! Our section is awfully quiet without your enthusiasm for the game. I specifically pick out my seats to enjoy the game with you. Thank you Tom for looking into this!

Whoops. I meant to post as Josh Weiselberg but Trisha made me an admin for the page and there's no way to switch who I post as from my phone.

The last post (also from Thursday afternoon) is as follows

The Padres just called me and said that they have witnesses that heard me cursing as I went down to the sand pit. Wow, for the first time ever I cursed at someone? One of the things I'm most known for is 'keeping it clean' and now they tell me that they heard me cursing BEFORE they put the cuffs on me?

One of the page's admins had posted this comment

I live with Harry and I have never heard him curse. How can they come up with a trumped up charge like this 2 days later? It took that long to cover yourselves for shame. You guys are an embarrassment to kindness and customer service.

Day three and I’m still hurting in the neck and shoulders. Still have a headache too. Had to take pain and sleeping pills the last three nights to get some sleep.

Tom Garfinkel just called and offered me his personal apology on behalf of the Padres. Which I accepted and appreciate that he went above and beyond what any other CEO would do. He also offered me his seats behind the dugout for tonight’s game for Tricia and me but I think I’ll back in my seat tomorrow. I will always love the Padres and wanted to move beyond this incident. I am thankful That Mr. G arfinkel went out of his way to make things right.

My back is still tweaked and I’m not feeling really good but I’ll be OK.

I want to thank everyone for their support during this rather painful experience and for you all to know how much I appreciate it. When people ask me if I’m a baseball fan I tell them no; I’m a Padres fan, and always will be.
Thanks,
HTH

I went to the game last night and had fun watching us take the Giants down a notch. It was a very different perspective on the first base side, I've never sat there during a game before. Mr Garfinkel came down to talk with Tricia and me for awhile and I am thankful for his kindness.
Players, fans, and ushers all welcomed me back and I thanked them all for the concern shown me. The Padres ballpark has been like a second home to me and the people there like an extended family.
When I woke up this mornig my back is still hurting between the shoulder blades and I still have a headache. If things don't improve soon I'll probably go to the VA Hospital and get x-ray or something.
I will be going to the last game with Tricia today but I don't think I'll be very noisy.
Let's see if we can take the Giants down another notch and end the home season with a win.