Share All sharing options for: Padres at Giants Series Preview

Well, the Diamondbacks series didn't go quite according to plan. The Padres were able to salvage the final game of the series, so they head to San Francisco six games under .500 and with the exact same number of wins as they had last year. In May who would have thought the Padres could have even won 72 games this year? They will surpass last season's win total, and, as J.P. Breen of Fangraphs points out, the team is poised to compete in 2013.

While San Diego's offense in Arizona was stifled more than it has been in the past few weeks, they still managed to score 10 runs in a three game series. They've certainly done worse. Now, they will head into the far more pitcher-friendly AT&T Park to take on San Francisco. The division-leading Giants really have no competition at this point. They are 10 games up on the Dodgers, but they have the opportunity, depending on how Los Angeles fares, to wrap up the division during the Padres' series.

Kelly returned to form in his last start. He went six innings against Colorado and allowed three runs (two earned). He lowered his season ERA from 7.07 before the game to 5.85 after. Kelly still has a long way to go, but we've seen the flashes of what he can be. This will be just his second road start of his career in the big leagues. Kelly will be pitching in front of a likely sold-out crowd with San Francisco inching closer to clinching a postseason berth. It will be the toughest atmosphere he has pitched in in his career, there's no doubt about it. San Francisco's magic number is five coming into this series against the Padres, and while Kelly will not be the opposing pitcher that could stand between the Giants and a division title, the fans will probably be rabid.

Vogelsong is weird. Let's recap: He is 35 years old, he had almost no success in his first six Major League seasons, he pitched in Japan for three seasons before coming back to the states and working his way through the minors again, and then suddenly in 2011 he was good. In 2011, Vogelsong was 13-7 with a 2.71 ERA. Then this season, he has kept it up. So far this year, he is 12-9 with a 3.65 ERA. Weird. Against the Padres, Vogelsong has a career 7.47 ERA in 31 1/3 innings. This season, he has started two games against the Padres and has a 3.60 ERA.

When I was looking on Padres.com for the probable starters for this game, I had to do a double take. It said C. Kelly vs. M. Bumgarner. But Kelly is pitching game one, right? I quickly returned to the game one starters, and sure enough, Kelly is the scheduled pitcher. The actual game two starter will be Andrew Werner, but Padres.com was throwing me for a loop. See for yourself: 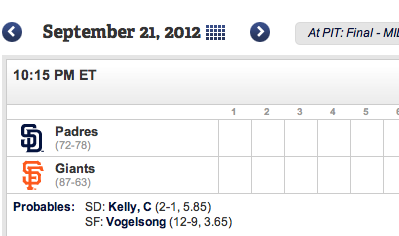 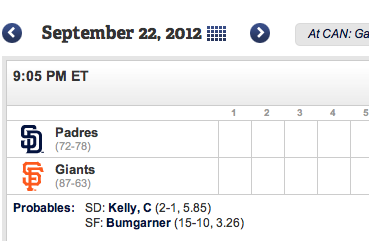 Back to the series preview. Werner finally got hit, and he got hit hard. Up until his last start against the Rockies, Werner could boast that he had never given up more than two runs in a start in his Major League career. Unfortunately, that streak ended last Sunday when Werner gave up five runs in five innings of work. He hung in there and managed to come away with the no-decision as San Diego stormed back and took what seemed to be an insurmountable lead, then almost gave that lead back. Werner, like Kelly, will be making just his second road start. As such, the same difficulties that will face Kelly will face Werner. The 25-year old former indy-league pitcher has nothing to lose though. He's made it this far, and he's performed well. He should not be rattled by the crowds in San Francisco.

Bumgarner's name always reminds me of Henry Rowengartner which is funny, but then I realize Bumgarner is a real pitcher, and he's good, and he pitches for the Padres' division rival. Bumgarner has been every bit as good this season as he was last year. At 23 years old, the Giants have themselves a nice pitcher for years to come (he's signed to a six-year deal through 2017). In his career against San Diego, Bumgarner has a 3.17 ERA. He has a slightly lower ERA at home in his career of 3.07. In all, Bumgarner is a pretty solid pitcher even without a magical broken arm.

San Diego has got to do some work on their website. It keeps letting me down. For the final game of the series, they have TBD listed as the pitcher for the Padres. However, if you check ESPN and just about every other scoreboard-displaying website out there, the Padres should be throwing Eric Stults in game three. So we're going with that. Stults took a tough loss against the Diamondbacks in the series opener. He went six innings and allowed three runs. The Padres could only score two runs in support. However, Stults has a surprisingly low 2.69 ERA on the season, he has a 2.71 ERA as a starter this season, and he has finally found a consistent home in the starting rotation. Depending on the Padres success in the series and how the Dodger perform in their series against the Reds, Stults could be pitching to stave off a division championship by San Francisco. The weight of that task must surely be weighing down on Stults as he looks ahead to this start....or he just doesn't pay attention to magic numbers and where the Giants are in the standings. He's a professional for God's sake. But seriously, let's not let the Giants clinch against the Padres, ok?

Timmy Lincecum is a different pitcher now than he was at the beginning of the season. Or, maybe that should be phrased as, Lincecum is back to his old self after being a different pitcher earlier in the year. Whatever the description is, Lincecum has been much better of late. Since giving up four runs in just four innings against the Nationals on August 15th, Lincecum has started six games and has not given up more than three runs in any of those games. He has lowered his ERA from 6.42 on July 8th to 4.91 currently. He's getting hot at just the right time for the Giants and just the wrong time for the Padres. Against San Diego this season, Lincecum has been pedestrian. He has started two games, won one and lost one, and has posted a 4.34 ERA. Of course, he has not faced San Diego since beginning his current run of success.

I know you don't want to read this, but the Giants are good. The Giants are going to be the 2012 NL West Champions. They may make a deep run in the play-offs. But none of that matters. The Padres have an exciting team that can hang with any other club out there. They may not sweep this series, but taking two out of three is not out of the question. In fact, I'd say it's well within the question. San Diego will take two out of three in this series.