And there, hanging in Cooperstown in the National Baseball Hall of Fame, was the plaque representing the greatest player to ever wear a Padres uniform. I attended Tony Gwynn's induction five years prior, but hadn't been back to see the plaque. I'd been meaning to go for a while, but knew the time was right when the Sisterhood project began. 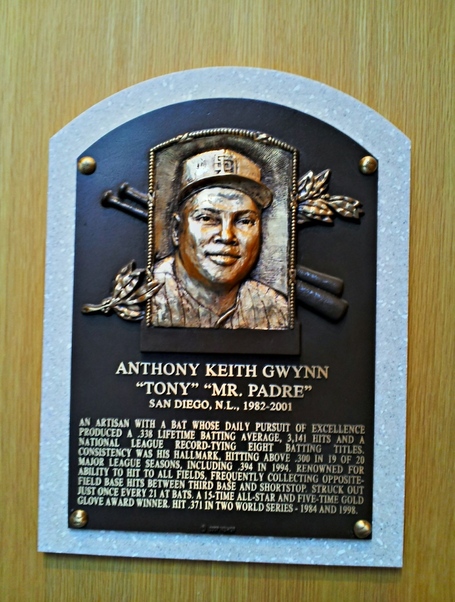 And with that, my part in the Sisterhood of the Traveling Jersey project felt complete. But really this was just the start. Or technically the middle. Anyway, I'm getting ahead of myself. Let's start at the beginning.

I've lived in upstate New York my entire life. When I was a child I was a Yankees fan on the basis of where I lived and who my family rooted for. My Dad was a Yankees and Astros fan. He also played 3B for the local softball dynasty, the Jets. As a child I would equate his plays to the defensive gems of Greg Nettles. I also was a big Goose Gossage fan, with the sick facial hair and nasty demeanor. In 1984, Goose signed with the San Diego Padres as a free agent. I was crushed. Then, Nettles was traded to the Padres. I'd never even heard of the Padres before, and now my two favorite players were playing for them.

I decided to follow the team, which in 1984 was a bit challenging. Games weren't televised, the internet was just a concept (hello 300 baud), and local newspapers didn't carry the results because the games ended too late. Still, I followed the team, and they did not disappoint, winning the NL pennant. Little did I know that the years to come wouldn't be similarly successful; I was hooked regardless. The Padres featured players like Ken Caminiti, Andy Ashby, Bip Roberts, Ryan Klesko, Phil Nevin, Khalil Greene, Brian Giles and of course Trevor Hoffman and Tony Gwynn. But I also came to enjoy some of the lesser known or obscure players such as Mark Parent, Wiki Gonzalez, Candy Sierra, Paul McAnulty, Greg W Harris, Archi Cianfrocco and our hero Dave Staton.

Fast forward to Saturday, September 8th. I checked the mail and saw the package. The Jersey was here! Due to some pre-existing plans, my adventure wouldn't begin until Sunday when the Devil Rays local short season team, the Hudson Valley Renegades, were hosting a playoff game. In the parking lot I donned the Jersey for the first time and it fit perfectly. Cherry8682 and I we were greeted with a free ticket by a random bystander. Once inside, I was approached by a man named Dan, inquiring about the numerous patches on the Jersey. Dan turned out to be a very knowledgeable minor league fan and we had a good discussion on various baseball topics. Then, a kid clad in New York Jets gear ran up to me asking why I was wearing a Padres jersey. I explained the Sisterhood but he didn't quite grasp the idea. He called it weird and thought it was stupid to "wear a stinky jersey for a week", noting he'd never heard of "Stanton". He then countered by saying I should just keep the Jersey. I considered explaining how I once picked Staton in fantasy baseball because of his power potential, but figured it wouldn't help. Despite his vagrant rambles it turned into a good game, with the Renegades staving off elimination. To make the day even better, later that night the Padres downed the Diamondbacks 8-2. 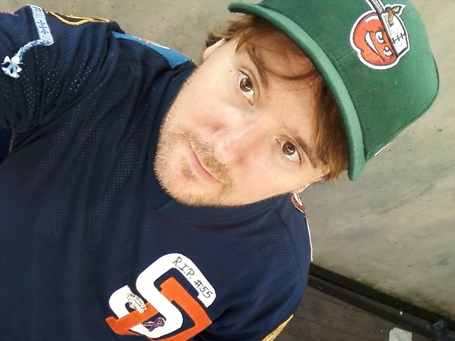 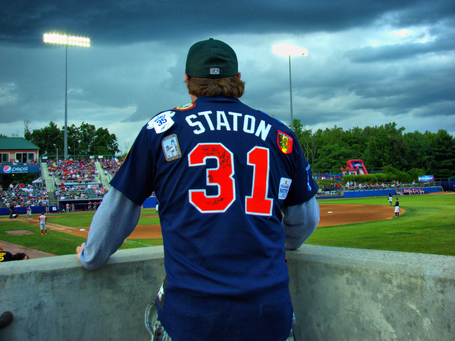 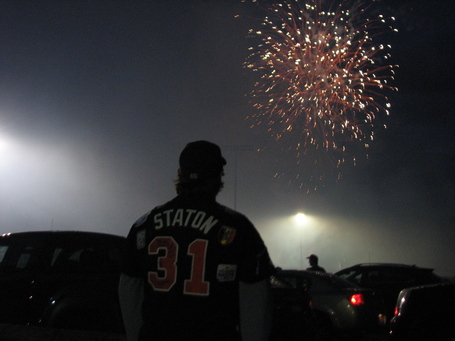 Monday was to be the highlight of the Jersey's visit. Cherry8682 and I were heading to Cooperstown to the National Baseball Hall of Fame! Cherry8682 had never been to the Hall, but I had visited twice in years past. I also attended Tony Gwynn's induction, and went for the final "Hall of Fame game" between the Cubs and the Padres which ended up a rainout. After a lengthy drive, we arrived at the Hall. Once inside, an older lady from "Southern California" noticed the Jersey and we talked about the project. We hit the gift store in search of a patch and possibly some other Padres memorabilia. Unsurprisingly, the Hall of Fame is like any other New York location: mostly devoid of anything Padres related. I picked up a Hall of Fame patch for the Jersey and commenced the grand tour of baseball's history. We stopped at an area where there was a locker for each MLB team, with uniforms and other paraphernalia. The Padres locker contained Trevor Hoffman's spikes, Kevin Kouzmanoff's glove from his near-error-free year, and pictures of two current players - oddly, Nick Hundley and Cameron Maybin. Later, we found the Gwynn plaque and basked in its awesomeness for a bit. Wandering the endless array of local sports gift shops, I scored a few small Padres items, and spied a Klesko shirt. Later, we hit the Brewery Ommegang, distributor of Ommegang beer and engaged in an oral debate with Three Philosophers. We then headed home to catch the Chargers opener, which they won in laughable fashion due in part to the Raiders ridiculous special teams follies. The Padres also won again, beating the Cards 11-3 this time. 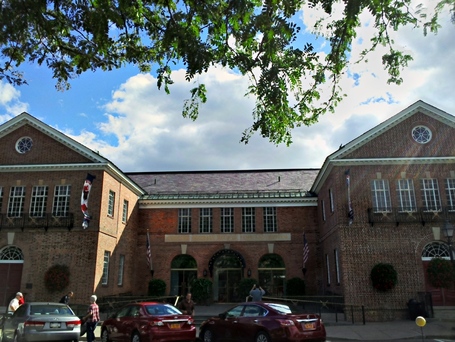 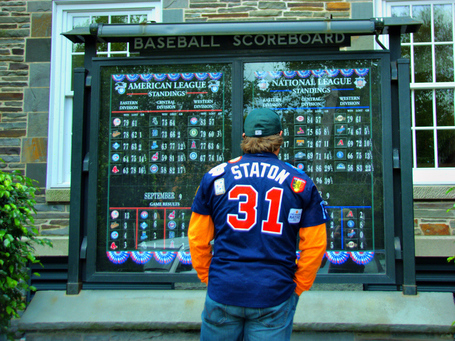 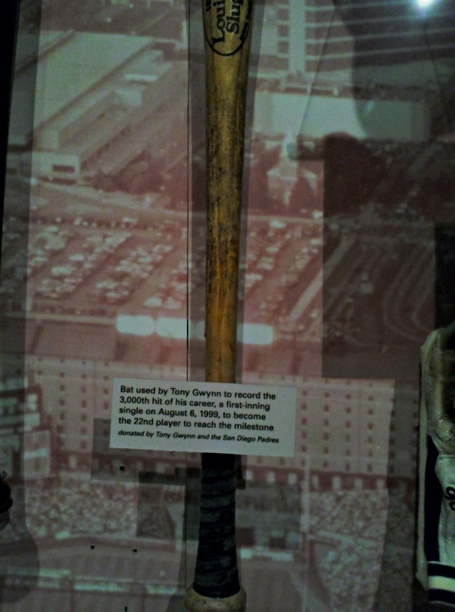 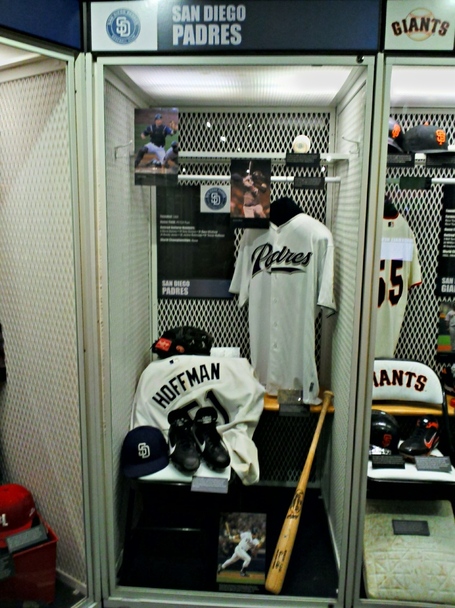 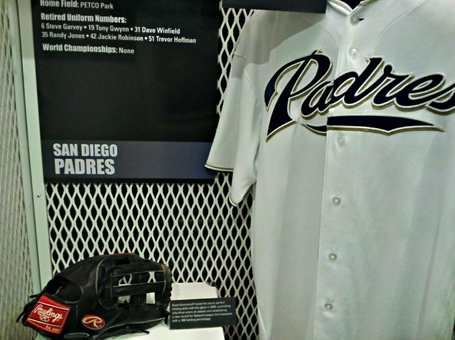 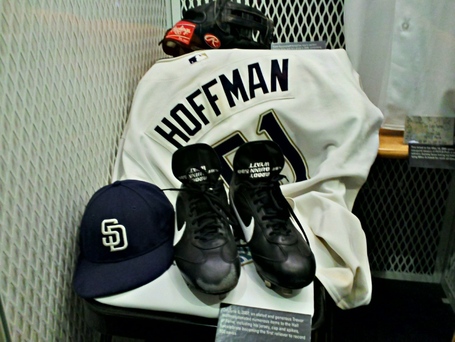 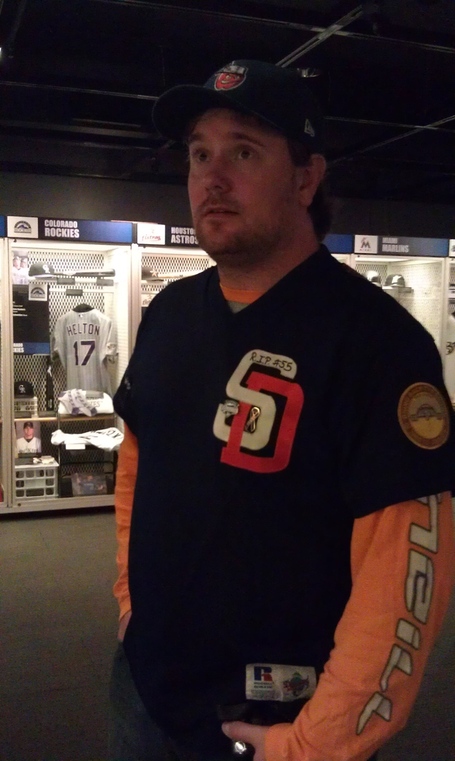 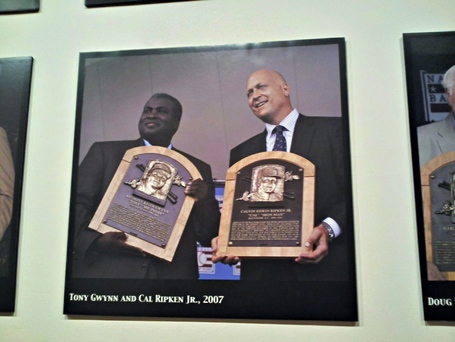 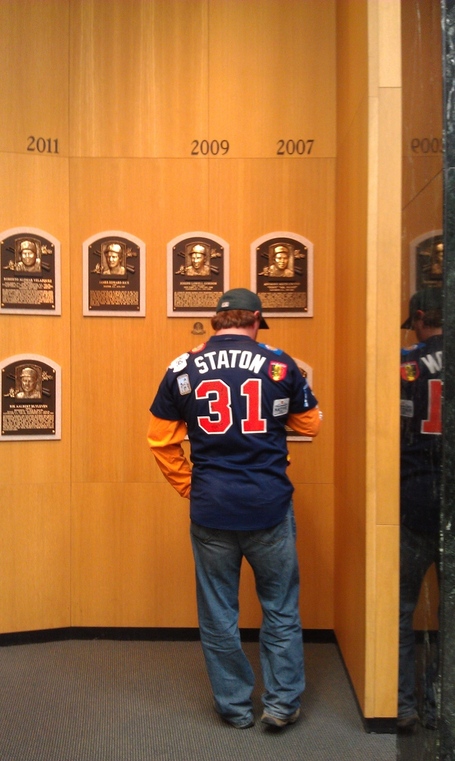 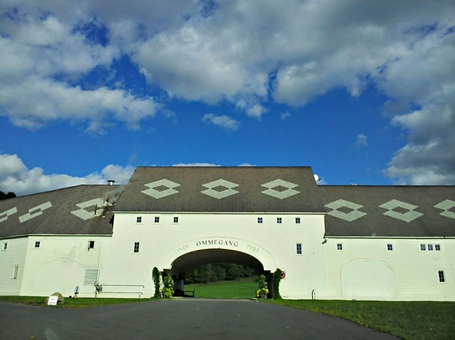 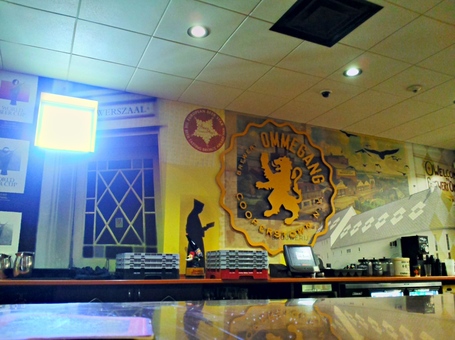 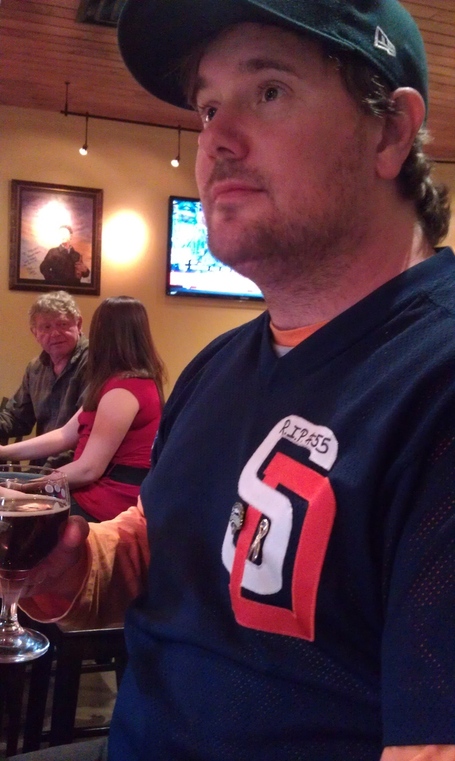 Tuesday was a quiet day by design. The women's softball team I run, Mobile Life, had their last regular season game (we won, finishing the season in first with a 14-2 record). Afterwards, I started to wonder if any team I root for would ever lose again as long as I had the Jersey in my grasp. Sure enough, later that night the Padres took another game from the Cards, 6-4.

On Wednesday, I decided to check out another Renegades game. This time they were in the finals, but lost the first game of the best-of-three championship series to the Tri-City Valley Cats (Astros). I thought perhaps the Jersey could help turn the tide. I picked up my brothers, Kevvybear and Long Horse, neither of whom had been to a Renegades game before. Just to be clear, my brothers are mutants, and hilarity always ensues when they are around. The drive consisted of Long Horse talking about the "sonar" (solar) panels on the highway, and the Certified Abortist (arborist) tree service vehicle in front of us while Kevvybear pleasured himself with the pear shaped bottom of his water bottle. The conversation flipped to Justin Thebodix, a fictional adult movie star, the latest exploits of the Birdman of the Hudson Valley and our softball team the Hudson River Horse. In true Jersey fashion, this time we scored three free tickets before we even walked up to the box office. Once inside, The Valley Cats had a section of dedicated fans, including some nimrod with a large plastic horn which he used to drink beer and then make bellowing noises like some Nordic warrior. The Cats pitcher, Aaron West, was pounding the strike zone and had a no-hitter into the 6th, when the Renegades tied the game on a Thomas Coyle single. Then, in the bottom of the 8th, 3B Richie Shaffer blasted a Klesko-esque moonshot to left field to seal the win and tie the series (the Renegades would win the New York-Penn League title the following night). Then the Padres followed suit, completing the sweep of the Cardinals with a 3-2 win. 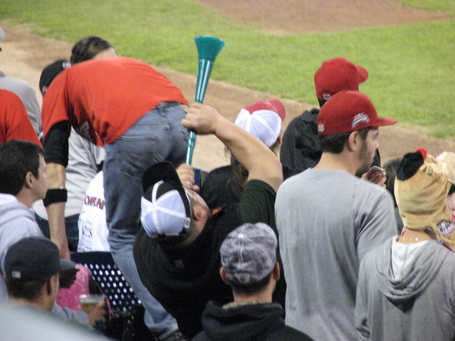 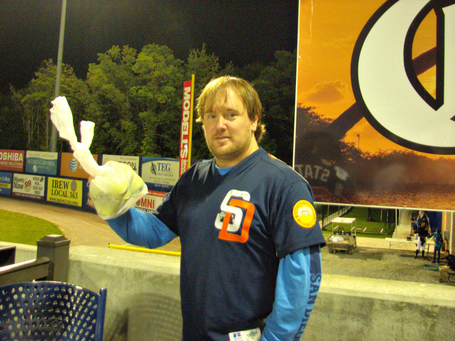 On Thursday I wanted to do some local sightseeing, as the Hudson Valley has a lot of great hiking spots and local history. We live in Kingston, the original capital of New York, situated on the historic Hudson River. The British sailed up the Hudson during the Revolutionary War and burned Kingston to the ground. Cherry8682 and I headed to Liberty State Park in New Jersey. The park is a short jump across the Hudson from Manhattan and also affords great views of the New York skyline and a newly constructed 9/11 monument. The monument is made of two huge walls filled with names of the fallen Americans of the 9/11 tragedy, and the walls line up exactly with the prior location of where the towers sat across the water. I'd considered coming a few days earlier on the 11th, but figured there would be too many people around to make it enjoyable. Thankfully the park was quiet and sparsely populated. We took in the views of the skyline, including the newly built One World Trade, the Empire State Building, the Statue of Liberty and the aforementioned 9/11 monument. 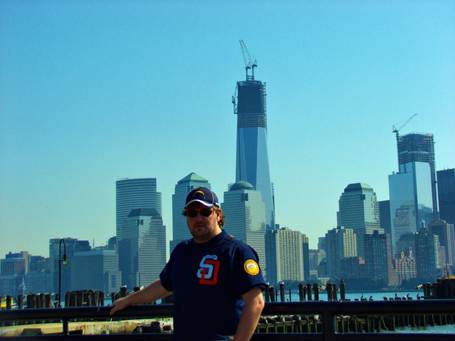 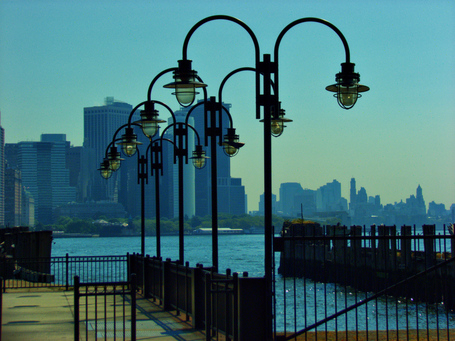 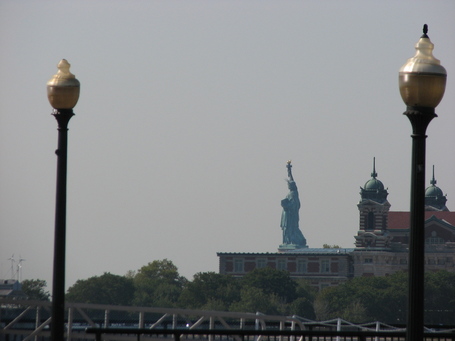 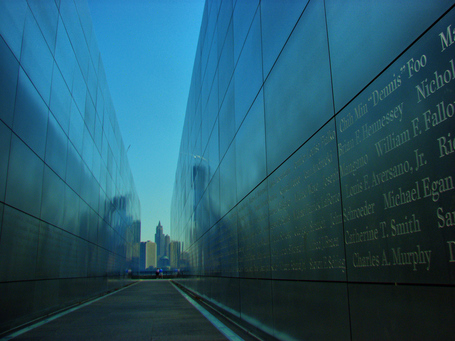 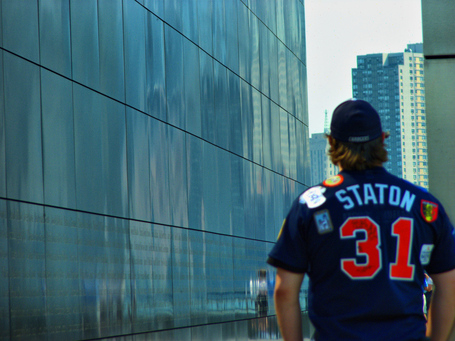 On the way home we headed to Storm King Mountain, near the famous West Point military academy. During the Revolutionary War the Americans constructed The Great Chain, a 600 yard chain that they hooked from one side of the Hudson to the other to prevent British ships from sailing up the Hudson to strategic points up river. Storm King is a foreboding mountain with a treacherous road carved into its rocky side that affords great views. Then we headed north. On the way to the next destination we passed through Vails Gate. Years ago, local legend Roadkill alluded to the Devil being from Vails Gate in their classic song, Dark Angel. Soon we reached the Walkway Over the Hudson. The Walkway is an old railroad bridge that was converted into a two mile long pedestrian walkway. It's currently the longest footbridge in the world. 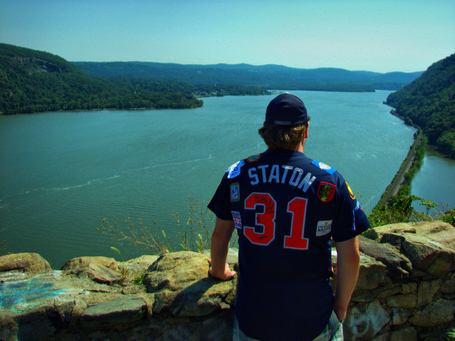 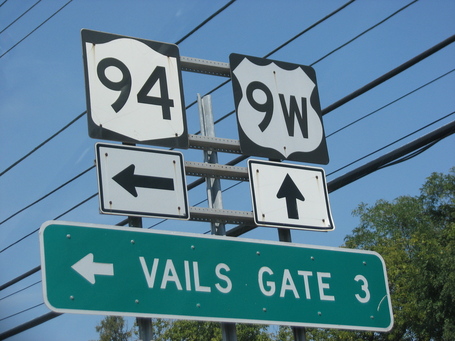 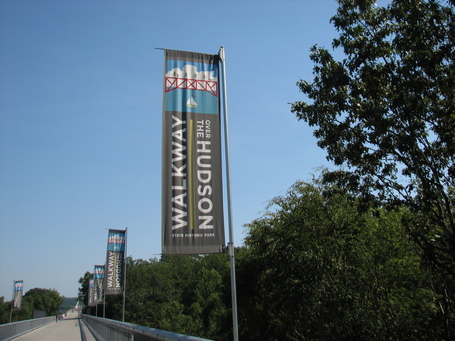 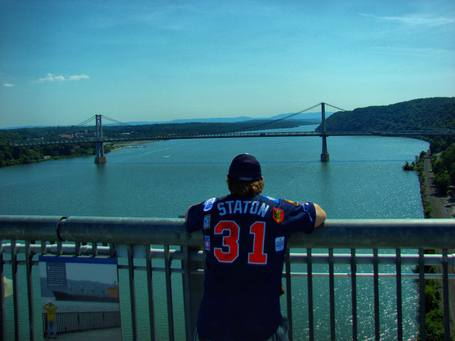 Meanwhile, the Padres had pulled within 6 games of the NL wildcard. I briefly thought about Jets Kid's idea of keeping the Jersey, and wondered if I did so would the Padres ever lose again? I envisioned the Padres as 2012 champs only to follow it up with a 162-0 2013 season that featured Will Venable hitting for the cycle in the same game that Cory Luebke pitched a perfect game. And with the Jersey's newfound fame, a gigantic Dave Staton statue the size of an AT-AT would tower over Petco. I quickly came to my senses and soon the Jersey was on its way to the next recipient. I enjoyed its visit and look forward to the further adventures yet to come! 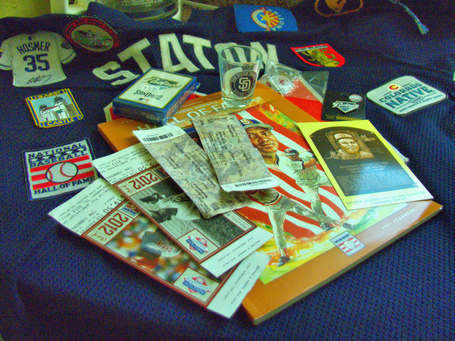