So I was the sole member of the GLB staff in attendance at Jerry Coleman Day yesterday. Here is how it went down.

I went to the game with Gaslamp Baller hs619. Prior to the game, we were discussing with darklighter where we thought they might put the statue. A couple of the places mentioned were the Home Plate Gate and the Padres Power Alley. The Home Plate Gate kind of made sense because it is the main entrance to the park. And the Power Alley kind of made sense because that is where the Salute to the Military display is located, which includes a cardboard cutout of The Colonel himself, plus the area gets a good amount of foot traffic.

Upon entering the park, we were given commemorative Jerry Coleman patches. They are preeeetty awesome, and we definitely need to get one on the traveling jersey, STAT(on).

We got park passes for this game, but @AlexMontoya619 was kind enough to put us up in a couple of seats in section 109, so we got to a great view of the pre-game ceremony in the shade. The ceremony was great, I thought. Smaller scale and not quite as emotional as Trevor Hoffman's number retirement last season, but I felt that it appropriately honored the Colonel without being over-the-top. My only complaint was the lack of fans in attendance. Not nearly the turnout I expected of such a day. 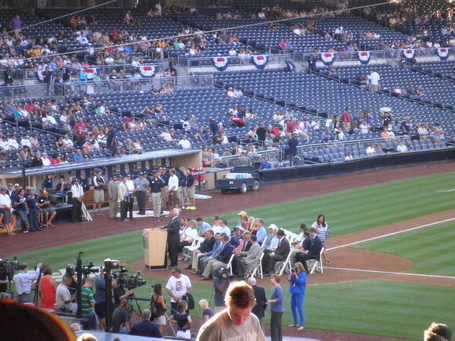 Ted Leitner took a break from calling the first quarter of the Aztecs football game to emcee the Coleman ceremony. I mean, there was no way it could have been done without him. He talked about how lucky he felt to have been able to work with Coleman all these years. He mentioned that one of everyone's favorite parts of the broadcast over the years had been him asking Jerry what he did each day. He listed some of Coleman's accomplishments. And he introduced the guests who were in attendance, including members of the Padres front office, various members of the media, Coleman's Yankees teammates, Coleman's kids, his grandkids, and even a great grandkid. The Colonel was visibly touched by all the attention and respect he was receiving on his day. He teared up listening to people speak so highly of him, which in turn made me tear up. The Colonel's catch phrases were put up on the screens in left and right field. They also put a star in the center field grass, which was awesome.

They brought the Marine Band San Diego on the field to play the Marine Corps Hymn. The band stayed on the field for the remainder of the ceremony, and later played the National Anthem.

One of everyone's favorite parts of the whole ceremony was Tony the Gwynn hanging a star from the press booth. it was awesome. 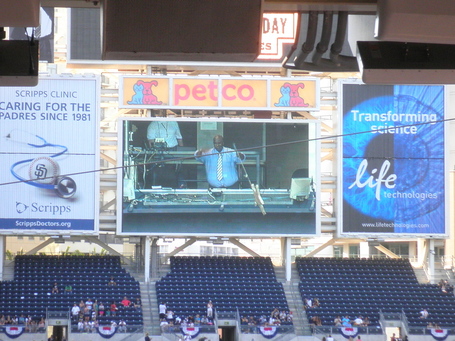 There was also a flyover by four F-18s. It was the first time that has ever happened at Petco Park.

Finally it was time for The Colonel to speak. He got a two-minute standing ovation. But to me, it didn't feel like nearly that long. But then again, we could've been standing and cheering for 10 minutes and it probably would still not feel like enough of a show of respect for the man.

I think the greatest thing that ever happened to me was landing in San Diego. I don't think, I know it was. Not only because of the city or where it's located. But because of you fans, who make it worthwhile.

He talked about the 2012 team, giving Bud Black a ton of praise for the way they've come together in the second half of the season, but also crediting the players for their performance. The pride he has in this team is amazing, and just makes me love him that much more. He even ended his speech by imploring everyone to "keep rooting for those guys that are giving their best," referring to the team.

The Friar got in on some star-hanging action too. Here he is on top of the visitors' dugout. 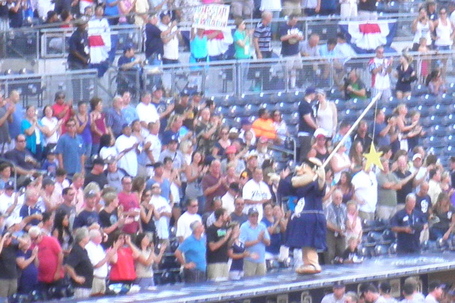 Ron Fowler spoke next. He commended Coleman's "three careers, totaling 70 years." Then he led a countdown to the revealing of the statue, which was unveiled by a Marine honor guard which included four Marines from Coleman's squadron, the VMFA-314. Once again, it became VERY dusty at Petco Park.

The statue, located at the East Village entrance to Petco Park, depicts Coleman in his 1952 flight suit. It is the same image as the aforementioned cardboard cutout in the Power Alley. I agree with Uncle Teddy and Jerry Coleman himself that the statue is perfect. It may have nothing to do with Coleman's baseball career, either as a player or as a broadcaster, but it is a representation of the thing that Coleman is most proud of. It was what he preferred to have as a statue. And although it doesn't directly relate to the Padres, it relates to the city of San Diego and it fits the vibe of the Padres as the team of the military.

One of the Colonel's daughters and one of his granddaughters threw out the ceremonial first pitch. Throughout the game, they played testimonies from various people as well as videos of Coleman throughout the years. It was all very cool.

I visited the statue later that night. It is supposed to be 7.5 feet tall, so according to this picture I am about 4 feet tall. Okay. 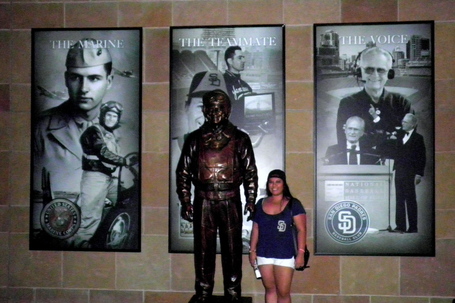 Oh, by the way, I made that shirt I'm wearing for the game yesterday (as well as the shorts, which you've already seen). Just the SD logo in sand on the front and "Oh Doctor!" in white on the back. 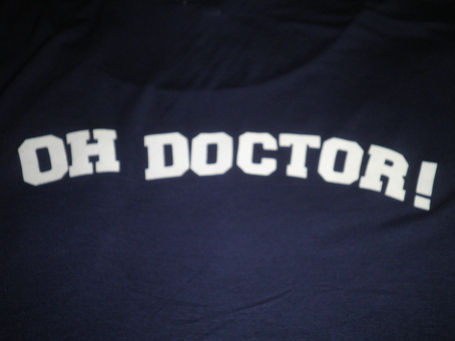 It was a great night at Petco Park. A fitting ceremony for a man who deserves so much respect and many accolades. And a fabulous statue to forever enshrine his legacy at the greatest ballpark on Earth. Thank you to the Padres for putting together such a wonderful celebration. And congratulations, Jerry Coleman!