The Sisterhood of the Traveling Jersey Makes Its Way To Cincinnati, USA

Share All sharing options for: The Sisterhood of the Traveling Jersey Makes Its Way To Cincinnati, USA

Yeah , they seriously call it "Cincinnati, USA" in their tourism ads, presumably to distance itself from the stigma of being part of Ohio and for good reason. A common joke around this part of West Virginia is "You know why all the trees lean toward the river? Because Ohio sucks." But if there is one thing that would make me want to go be surrounded by a bunch of filthy Buckeyes, seeing my Padres in action is it. That's why I raised my hand, said "Me! Oooh, me! ME!" when Mr. box was making the tentative schedule for the jersey's sisterly travels and, when called upon, asked if I could get it in late July/ early August when our boys were going to be at Great American Smallpark. He penciled me down and before I knew it, the day was upon me.

I received the jersey on a Monday evening after fellow Gaslamp Baller CoraTheKitty handed it off. My first order of business was to sew some patches on it. 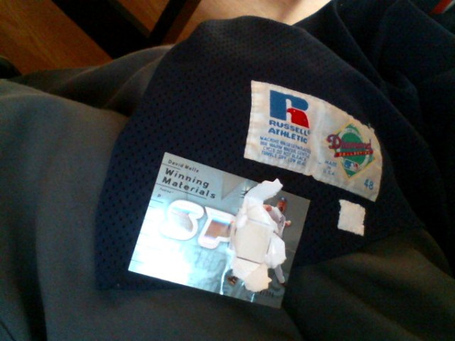 I had a David Wells game used jersey relic card and gutted it to liberate the jersey swatch. I thought it would be a neat addition in the sense of "Hey, Dog, I heard you liked jerseys so I took this jersey and put it on your jersey." 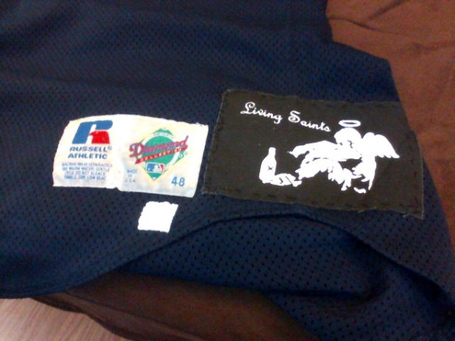 The second was a Living Saints patch. It's my friends' band so I through it on there as a landmark of the jersey's stop here. I had a couple of other patches I was planning to sew on but hadn't got around to doing when I found out Wednesday morning that I'd be handing it off that evening as opposed to mailing it off later in the week. One was a Garvey patch I recently got off eBay for the sole purpose of putting it on the Sisterhood jersey and the other was a shoulder bolt from an old Chargers jersey I cut up for another crafts project.

(On a side note, how great does my hair look there? Not a bit of product, either; I just wake up like that.)

Tuesday was the jersey's day off. That's my way of saying I got all tired out at softball practice in the morning/ afternoon that I didn't feel like moving in the evening. If I had known at the time that I'd be handing it off the next day I would have gotten off my lazy ass and taken it to see some local sites. I had planned on taking it to the Mothman statue and site of the Silver Bridge in Point Pleasant and a West Virginia Power game in Charleston on Thursday but I guess at least now I'll have something interesting to do if there's a sequel next year.

Wednesday was gameday. I found out I'd be handing the jersey off to Leila from Fox Sports San Diego at some point during the game. My friend and I got off to a very late start and I was getting pretty stressed because I was supposed to meet up with her between the 4th and the 7th and I didn't want to be the guy who screws everything up like I tend to be. When we were getting close I got word from Dex that I could breathe easily since it got pushed back to the 7th or 8th. We finally got there after the 4th with the game tied at 4s and I got additional word to just find her or somebody from the crew to hand it off to after the game. I was pretty relieved I wouldn't have to make an idiot of myself on TV, saying "ummm" and "and stuff" after everything. 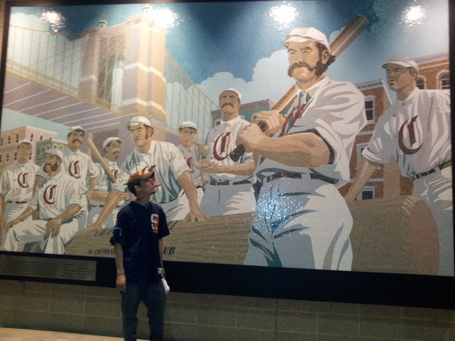 The Padres got their loss on and I tried to make my way down to the determined meeting place in the ninth but got hassled by a bunch of rent-a-cops. I worked my way around the field to where FSSD was set up but the dude there was some FS Ohio guy who didn't know anything. Somewhat long story shorter, I dealt with a couple more babydick security types and wound up back there. Everybody screwed around on their radios for a while and finally the oblivious guy said he'd make sure it got to her.

Meanwhile, Trevor was a couple of yards away from me so I forced myself to let out a "Hi." He did that classic "Yeah, I see you, now take a hike" half half-nod, half eyeroll thing. Hey, good enough for me. 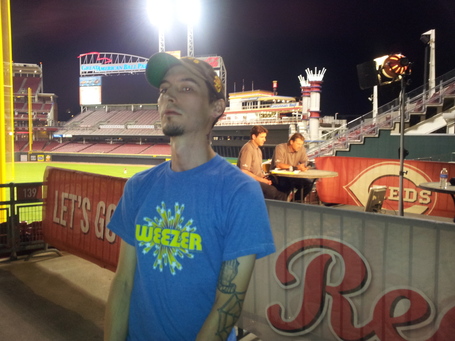 Once we finally got TFO of Great American, we headed home. About an hour in to the three hour trek we got pulled over and I got an open container charge for a tall can I was using as an ashtray. Did you know that's a $240 fine? Me neither. A couple hours later I was so happy to be out of that God-forsaken sewage pond they call a state and be back in beautiful Almost Heaven.