The Padres hosted a Social Media Night recently, wherein they sent out an offer via Twitter and Facebook and crossed their fingers and hoped magic would happen... And ohhhh did magic ever happen.

Jonny Dub and I hitched a ride with jbox over to Petco Park. JBox drove and, not being one to appropriately decelerate when coming off of the 94 into downtown, he hit a raccoon or possibly a chupacabra with his car.

The car is probably OK, though the plastic bit under the bumper got pulled off and the plastic in the wheel well tore completely free. The raccoon (or chupacabra) was severed perfectly in two and jbox was driving fast enough that the heat of the tires apparently cauterized the defenseless trash rummaging animal so you had two distinct raccoon pieces with no guts or blood to be seen on the road or anywhere on the wheel well casing, which I had always referred to (incorrectly) as a wheelhouse.

Thankfully, women in their late 40s to early 60s are right in the wheelhouse of Ole Unkie JBox. Thinking quickly, JBox put a bit of the charm on and bartered away some of the ColdStone ice cream that our suite was stocked with for some cold refreshing bottles of Bud, Bud Light and Miller Lite. We shared with various other Padres bloggers who all quickly proclaimed, "BEST BEERS IN SAN DIEGO. EFF MICROBREWS", much to the delight of Mentor Tom Garfinkel (who made an appearance) and Ron Fowler (who did not).

Tom Garfinkel made an appearance with A.J Hinch and Josh Byrnes. We briefly spoke with Josh Byrnes and the conversation went something like, this:

Byrnes: I gotta get back to the game, but ask me questions. Quick.

Me [pretend angrily]: Why did you trade Jake Peavy!?!

Byrnes (full on irritated): I didn't trade Jake Peavy. But I would have.

Rick from RJ's Fro: Miller-Coors is the best!

That would've been a weird thing for SDPads1 to say, but I may have taken the quote out of context.

We also chatted with Andy Masur who made an appearance. JBox was hoping for Andy to hang out with us a little bit once the game started just so we all could see if he would just start doing our own private play-by-play. I would've added color. JBox could've played the Mark Sweeney part. But it was not to be. 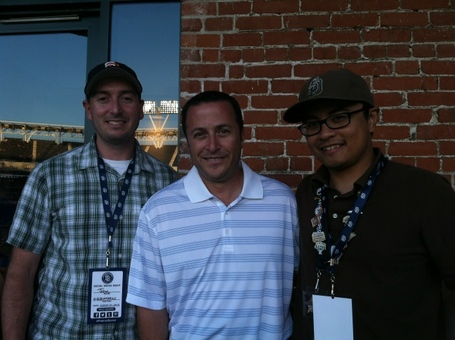 Circle back to the beginning... 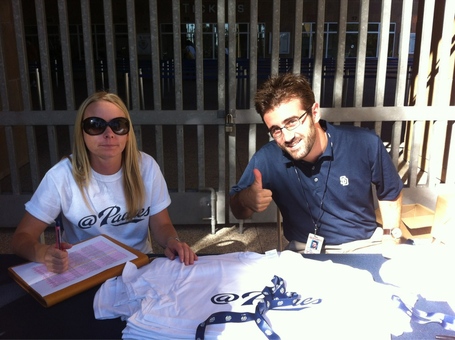 When we arrived late, because of the burnt raccoon, Sugar Shana Wilson (the coordinator of the event) glared at us a little angrily and "Ish" Josh Ishoo made a point to let everybody know that we were the ones who were late. 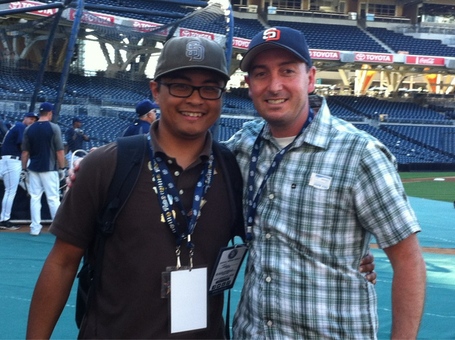 We got to watch some batting practice, and our Padres made a nice little display of crushing the ball, but I think I was most impressed with the fact that Harry the Heckler managed to get Chipper Jones to head over to say hello. Harry the Heckler also yelled at us from the stands, saying something like, "You guys are all from Twitter!? The thing that people do when they have nothing better to do with their lives!?"

So endearing to be heckled.

In future post...Dex harasses his hosts about the order in which the food is brought out. Everybody in the suite looks at their phones and tweets to fill awkward silences. Ladies Night Out pulls over after the game to try to score weed on the street.