Share All sharing options for: Padres eighty-six the Mets in eighty-nine uniforms by a score of three to one

That game flew by. I arrived a little late and after standing in line for food for an inning the game was already well underway by the time I started paying attention If my calculations are correct it lasted a mere 2 hours and 15 minutes. I love a quickie. Ask anybody.

The Padres were decked out in their 89 uniforms and they looked so brownlicious and orangerific. You know I really kinda tried to like the new uniforms this season but nothing really compares to our old ones. I wish we could just switch every game between all the pre-2000 uniforms.

I think it was sometime in the 4th when Jodes was nice enough to invite me up to her private suite. Shortly thereafter we watched the game in the kind of luxury we deserve. 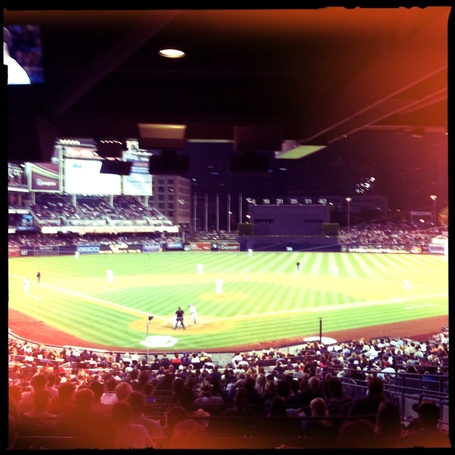 It was there that we watched the Carlos Quentin pick up speed and pump his arms like a locomotive as he approached home plate. The ball beat him to the plate, but he beat the catcher to a pulp.

Jodes and I low fived in a very understated celebration.

Next thing we knew Huston Street was closing out the game and we were headed home.

On the way out I had a chat with Pad Squadders Alicia and Elizabeth. Their Pad Squad 80's spirit was refreshing like an ice cold Tab.