The Padres give the best retirement gifts, except Chipper don't surf

Share All sharing options for: The Padres give the best retirement gifts, except Chipper don't surf

The Padres' retirement gift for Chipper Jones, a surfboard, has been ranked as the best of the lot by Big League Stew. Finally the Padres aren't being ranked last in something.

I've always felt the best gifts are those that promote a common interest between two entities. The Padres and Hoffman obviously have a connection to the ocean and well...

Game stunk!! I stunk!! Anyone know how to surf?

But I do have to credit the Friars for putting in the thought to present Jones with a retirement gift that's both unique among his growing collection of tributes and reflective of the city it came from. It's definitely the best of the crop so far, though the New York Mets do have more time to come up with something better than sticking Chipper with the unsold inventory of Shea Stadium seats.

In other news, Chipper cut through the Social Media crowd yesterday to embrace Harry "The Heckler". It was a touching moment to see what should be a pair of mortal enemies, a player and his heckler, embrace and say goodbye. I call this photo "Harry and Larry". Players bribe Harry not to heckle them, I wouldn't be surprised if Harry ended up with the surfboard somehow. 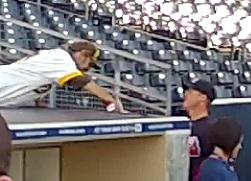 When we walked off the field we saw the surfboard laying along the base of the wall under guard. We thought it was a remnant of the Klesko era. Later when it was presented we were like "Ahhhhh Haaa!" That's about as close as we came to any kind of connection to this story.