Share All sharing options for: Padres vs. Pirates Series Preview

The return home was not a welcoming one as the Padres dropped two out of three to the Giants. They had a big game yesterday which they seem to do in every home day game. I could check on this stat, but let's just say they are better at home during the day. I'm using the 'ol eye test to make this claim, but I'm sure one the fine readers out there will do my leg work for me and give us all a stat to back this claim up or debunk it.

There was some good to come out of the Giants' series. Yonder Alonso went 3 for 9 in the series, Cameron Maybin had four hits yesterday, Clayton Richard put together ANOTHER awesome start, and Chase Headley was Chase Headley. While the Pads did little to hurt the Giants shot at the postseason, they managed to salvage the last game of the series and avoid another sweep.

The team has fallen back into a rut of sorts, but they are still surprisingly entertaining to watch. It's like that romantic comedy your girlfriend made you watch. You know you shouldn't like it, but hey, it had some good actors, a cute chick here and there, and it made you laugh. That's the current form of the Padres. Next season, we all hope they'll be that blockbuster action flick, but for now we can settle for the secretly entertaining romantic comedy.

We have some interesting stories to watch as the rest of the season unfolds, and these stories will carry on through the Pirates series. Will Chase Headley keep up this torrid pace and be traded in the offseason? Will Yasmani Grandal blossom into the catcher the Padres have been missing since Benito Santiago left? Will Jedd Gyorko get a shot in September. And finally, possibly most importantly, can the Padres parlay some success toward the end of this season into success in 2013? To do so, they'll have to beat the Pirates and try to knock them out of the current postseason slot their in.

The Pirates were due to throw Wandy Rodriguez at the Padres in game one, but they had to use him that 19 inning affair yesterday. It's unlikely Rodriguez will pitch, so Pittsburgh will have to comb through its roster to find a pitcher who wasn't burnt out in essentially two games of work built into one yesterday. Regardless of who pitches, the Padres have owned the Pirates of late.

Eddy Volquez (as everyone except for me seems to call him) has not been very good lately. Check out his last four starts: At Atlanta, six runs; at Pittsburgh, six runs; verse New York, four runs; at Cincinnati, five runs. In other words, not good. Volquez has shown us glimpses of his true talent level, and I have written before about my belief that he could truly be an ace if he finds the right pitching coach and dedicates himself. As it stands now, he's a solid number five starter, but he's not our number five starter. That's a problem. The good news is Volquez has a 3.06 ERA in 16 starts at Petco in his career. As is the case with just about every pitcher, Volquez has success in Petco. It could be the 30.7% fly balls he allows have a harder time finding the seats at Petco than just about anywhere else. Whatever it is, I'll take it...as long as the offense can give him some run support.

Burnett did not have a good outing against the Padres last time these two teams met. Take a trip with me, if you can, to nine days ago. It seems like a lifetime ago (does it?), but the Padres were winning one of the two games they took from the Pirates in Pittsburgh. Burnett went 5 2/3 innings but gave up nine hits and five runs (four earned). The Padres, all by their lonesome, cause a .13 jump in Burnett's overall ERA (from 3.19 to 3.32). He has since pitched against the Dodgers and gave up another six runs. Maybe, the Burnett we all knew and loved, but Yankees fans all knew and hated, is coming back. If that's the case, the Padres should be due for another high-scoring game. Burnett has only played in one game at Petco Park. he pitched six innings and gave up five runs (four earned). Sound familiar? If not, please re-read this paragraph.

As for Marquis, he got schlacked (not sure how to spell that, but you get the point) in his last start. He only lasted 4 2/3 innings while allowing the Braves eight hits and six runs. After a dominant, 9 inning, two hit performance, Marquis had lowered his ERA to 3.66 on the season. He was well on his way to legend, on his way to being hailed in the same breath as former washed-up veterans who found new life in San Diego like Aaron Harang and Jon Garland. However, the schlacking (see, now I'm just going with this spelling) in Atlanta raised his ERA back to over 4.00. As a side note, the Padres should probably let Marquis walk this offseason and go to the Dodgers. While the Padres can't get anything in return, old veterans who had some level of success continue to show up in Los Angeles with much less success. And isn't that what we want for our "friends" in LA, much less success? Anyway, back to Marquis. He has played 435 seasons in his career and has faced the Pirates 29 times (starting 25 of those games). His career ERA against the Pirates is 3.71. And his career ERA at Petco is 3.30. So, it's a pretty good combination.

McDonald got lit up by the Padres in his start in Pittsburgh. He pitched just 4 1/3 innings, allowing seven hits and seven runs. He's better than that showing. There's no question. So far this season, McDonald has a 3.61 ERA and a 3.72 FIP. He has reduced his BABIP-against by almost 30 points (.266) this season compared with his career average of .293. McDonald has started two games at Petco and tossed a total of 12 2/3 innings. In those innings, he gave up 12 hits and six runs. Matched up with how well the Padres hit him in his last start, this bodes well for San Diego. However, McDonald had a bounce-back performance after getting knocked around by the Pads. Against the St. Louis, McDonald pitched six innings and gave up just two hits and no runs. Which McDonald will the Padres see?

As for the Padres, I will leave you with the fantastic picture of the Padres TBD pitcher from Padres.com: 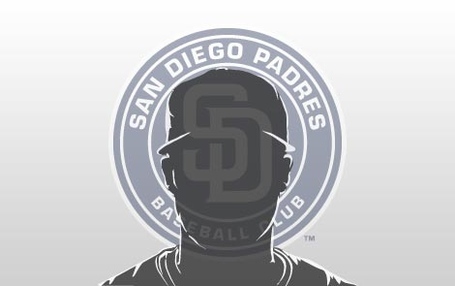 That's the face of a winner!

Let's be honest, the Padres have not been playing as well of late. But that being said, the Padres own the Pirates. On the optimistic side, I'm thinking sweep. I'm thinking Chase Headley will hit another bomb in the series, Yonder Alonso will continue his hot-hitting, and get ready for this, Cameron Maybin will finally get his OBP over .300 on the season. On the conservative side, I say the Padres take two out of three. I refuse to predict a series loss ever again - so get used to it.