Share All sharing options for: Padres vs. Reds Series Preview

After losing a tough game yesterday in Miami and dropping two of three to the Marlins, the Padres will be facing the red-hot Reds in Cincinnati tonight at 4:10 PM PT. Cincinnati enters play today with a ten-game winning streak - their longest since 1998 when they also had a ten-game streak. But the Padres have something they haven't had since 1998 now as well; a closer under contract for multiple years who's in his 20's (Hoffman actually turned 30 in 1998). What's that mean to this game? Probably nothing, but it's nice to say. Maybe Huston Street gets to save a couple games and lower that already ridiculously low ERA, though.

This series marks the first time a large group of Padres players gets to return to their roots. Yes, roots means the team in which they were drafted to or spent most of their career. Yasmani Grandal, Yonder Alonso, and Chris Denorfia were all drafted by the Reds, and Edinson Volquez spent the majority of his career there. On the other side, the Padres will miss their old friend Mat Latos. He pitched yesterday and threw eight strong innings to help the Reds increase that winning streak.

Volquez, who leads the Majors in walks allowed (not a good thing to lead the league in) has been pitching much better of late. His 3.30 ERA is largely due to him giving up two runs or less in five of his last six starts - including the one-hit gem he threw on July 19th. Volquez shouldn't worry about walking too many Reds' batters. Despite their surprisingly-good record this year, they are walking less than 18 other teams in baseball and striking out more than 17 other teams in baseball.

Mike Leake is a hometown guy so it's hard for me to make fun of his name. Hard, but not impossible - that's for another day though. The San Diego kid out of Fallbrook High School has been solid but not great for the Reds this year. He's striking out fewer batters this year but walking fewer as well. Leake's 4.12 ERA appears to be inflated due to allowing more home runs than normal as his xFIP sits at 3.62.

Marquis is no stranger to the National League Central. He spent five seasons (2004-2008) pitching for the Cardinals and then the Cubs in the Central. He's pitched 96 innings against the Reds, but his ERA is far from exciting. In those 96 innings, Marquis has allowed 52 runs, good for a 4.50 ERA. His ERA at the Great American Ball Park is slightly lower at 4.35, but nothing to write home about (although it is something to write in this story).

Homer Bailey has the worst name for a pitcher in the history of pitchers. His name is actually David though, so I'm not sure it counts. True to his name - or nickname, I guess - Bailey gives up 1.13 home runs per nine innings. This season, he's allowed a total of 17, his most since last year when he gave up 18. Yet, Bailey is having his best season ever as a Major Leaguer. His 3.53 ERA ranks 18% better than league average.

Cincinnati was actually the last team Wells pitched for in the Majors before San Diego gave him another shot (read: was forced to give him another shot). In 2009, Wells started seven games for the Reds and posted a 4.66 ERA. Wells did earn the only win for the Padres in their three-game set with the Marlins though and looked strong doing so. He gave up just two runs in six innings. But which Wells will we get in this game? The six innings, two runs pitcher, or the couldn't get through five innings in two of his last three starts pitcher?

Bronson Arroyo - all I want to do is talk about that time he had corn rows. Can we do that? No, you're tired of people making fun of that strange time in his life? Really? Ok, well Arroyo has now spent the majority of his career with the Reds, his dread locked/corn rowed hair days long behind him, and has a career 4.11 ERA with Cincinnati. This season, Arroyo has a 3.76 ERA and has lowered his BB% while increasing his K%. But the bottom line for Arroyo is this: 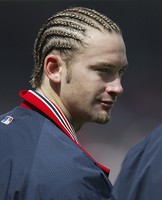 The Reds are good. Too good. I was optimistic about the Marlins series and see what that got me? Back to the land of pessimism and self-doubt. I think the Padres can take one game in this series, but I think we're going to see a lot from the offense. The Great American Ball Park ranks second in Park Factor for home runs.