The 2 foot "Giant Slugger" Hot Dog is eaten, but it takes a village

Share All sharing options for: The 2 foot "Giant Slugger" Hot Dog is eaten, but it takes a village

You'll no doubt see video footage of this on an upcoming episode of Padres and Pints but I thought I'd share my personal experience.

I'd only heard rumors of the new 2 foot long hot dog until I witnessed a determined Gaslamp Baller matthewverygood walk towards a concession cart on the main concourse. The crowd hushed in anticipation as he ordered.

He slapped down a crisp $25 bill and purchased the "Giant Slugger" which consists of a giant wiener, beans, nacho cheese and jalapenos stuffed into a baguette. As if to dissuade anyone from getting carried away they advertise that it's meant for a family of four. That was just lawyer speak, Matt who was filled with bravado scoffed at the suggestion.

This isn't the first time @matthewverygood has paid $25 to put a wiener in his mouth. twitter.com/gaslampball/st…

Almost instantaneously #MattHasGiantWiener started trending on Twitter in the southern most quadrant of Petco Park.

Matt, followed by a crowd of spectators, found a suitable table to begin his experiment. He got down to business right away. The Wiener was cut into quarters. The first 6 inches disappeared into his mouth leaving nothing but Nacho cheese on his chin.

A few bites into the second quarter he began to slow and became drunk and angry on carbohydrates. He demanded to hear updates from the game. Gaslamp Baller gdarklighter fed him information as if it were a giant wiener, but it wasn't detailed enough. Matt lost his temper yelling "I need to hear baseball game updates to get my throat to relax!" I took a mental note as I bit my lower lip.

After eating half the Giant Slugger he quit. He told everyone in earshot that he'd eaten at Phil's BBQ earlier that day and that that was the only reason he couldn't finish. I told fellow spectators that I wasn't sure if he was more full of hot dog or excuses.

RJ's Fro tagged in at that point and ate the third quarter. Covered in beans and cheese, he too tapped out. 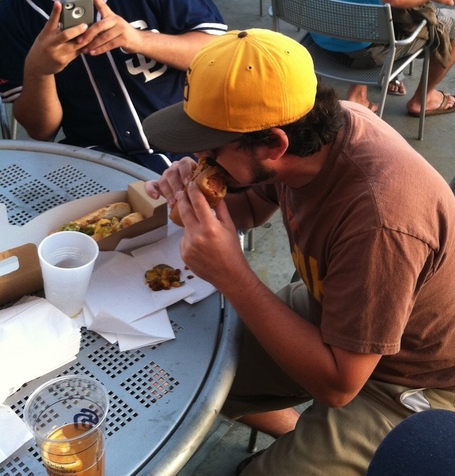